Manil Suri and 'The Death of Vishnu' 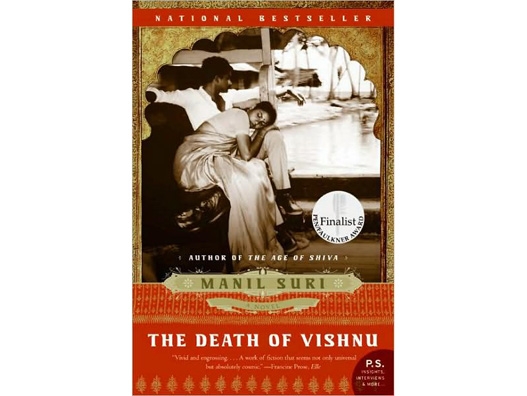 Manil Suri’s debut novel, The Death of Vishnu, is an insightful and lyrical portrait of the inhabitants of a Bombay apartment building which centers around Vishnu, a homeless man who lies dying in the hallway. Laden with Hindu imagery, biting social commentary and subtle humor, The Death of Vishnu has received a great deal of critical acclaim since its release in January. Newsday called it “a seamlessly constructed, quietly eloquent work of art," while Time noted, “Suri's novel achieves an eerie and memorable transcendence.”

Born and raised in Bombay, Manil Suri came to the US to study mathematics. He is currently on sabbatical from his job as a mathematics professor at the University of Maryland. Asia Society spoke with the author from his home in Maryland.

How much of the story in The Death of Vishnu is true? How much reflects your own life growing up in Bombay?

There was a real man named Vishnu who lived in my building and he did die, but I didn’t really know him. In fact, I never really had a conversation with him. So the details of the character’s life are not true, but there are characters that did exist like Tall Ganga, Short Ganga, Cigarettewalla and Panwalla but I think the events that I have them in are certainly not true. The thing that probably reflects my own experience most is the fighting between the neighbors. We did share a kitchen with the next door neighbors.... My parents still live there so it’s not like any character is modeled after my mother or anything like that.

Is it a common situation in Bombay for different families to share a single kitchen?

Yes, it is. The situation is a little different than it is in the book because we are actually what is called "paying guests" and what that means is that a family might have a large apartment and they want some more money so they rent out a room. We were the people who rented a room from this other family and then we just shared this kitchen.

How does Hindu-Muslim tension factor into this book? Is it significant that Mr. Jalal, the one character who sees Vishnu as a religious figure, is a Muslim?

Mr. Jalal is actually based on Emperor Akbar from the Mughal period. He had a similar vision and tried to combine Hinduism and Islam. He was the starting point for Mr. Jalal. I think the events in the last several years in India make Mr. Jalal more significant and more topical.

Do you think Akbar’s vision is one that India can take a lesson from today, given the recent outbursts in communal strife?

Yes and no. I think Akbar’s ideas are very noble but the problem was that he set himself up as an intermediary between his subjects and God so they had to come to him for blessings. Akbar was quite ego-driven, as was Mr. Jalal.

Was it just coincidence that this man who lived on your steps was named Vishnu, as in the deity?

Originally I didn’t even make the connection with the religious significance of his name and I was just writing about the reaction of these characters to this person dying in their building. I was taking a writing workshop with an author named Jane Bradley and she’s the one who first pointed out the connection. It’s so common in India for people to be named after gods that one doesn’t really think about it. Here of course if you had someone named Jesus it would be a big deal. So the religious significance came to me some time after I wrote the first chapter and then once I decided I wanted to extend it, religion provided a rich source of material.

How important was Hinduism for you growing up in Bombay? Did you have to research Hindu mythology or was it just part of your upbringing?

I was brought up a Hindu but it was more cultural. I didn’t have much of a background in mythology and I hadn’t read any of the texts. I had to do a lot of research, especially when I started writing the third and fourth chapters.

How does your day job as a mathematician influence your work?

If you look at the book, there is very little you can cut out. I went through it several times and decided not to include anything that was unnecessary. That is very mathematical. I have practice from writing mathematical papers where you have to comb through it and make sure there’s no extra equation.

Yes, it’s amazing how those two things are so similar. I like to think of this book as a theorem where you have this building and events occur in it and then you can think of this building as… a representation of India with all of these religions or it’s this ascension in Hinduism where all the floors represent different levels of life. It’s sort of an abstraction, much like in mathematics where you have a theorem and apply it to different settings or applications and you get different roots out of it.

How has the book been received in India?

It was first released in India in January. It was a little nerve-wracking because I haven’t lived in India for 20 years and I am writing about India. Critics there could have town it apart, but they really received it very well and the press was very supportive. They called it a "very Indian novel", a "very Bombay novel", so that was very heartening.

I read that you are planning to write a trilogy based on the Hindu idea of trimurti, or the three basic forms of God. Are you working on this now?

Yes, I am now working on The Life of Shiva. It’s not a sequel. It has entirely new characters. Part of it will be set in the US and there will be an American character who goes to India. I’m still exploring various options for that book.

Well, I certainly look forward to reading it.