Kevin Rudd: Toward an Asia-Pacific Union 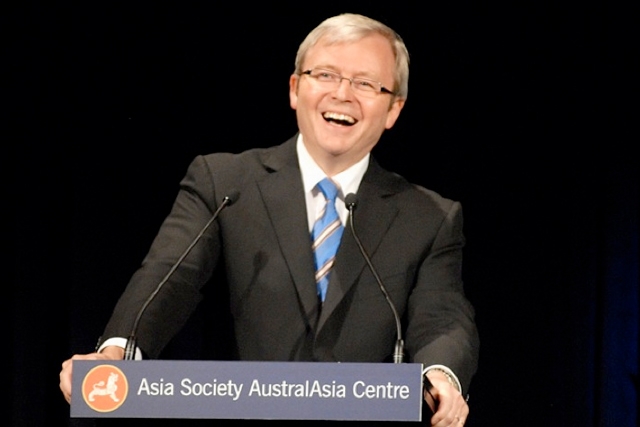 SYDNEY, June 4, 2008 – The Asia Society AustralAsia Centre hosted the Australian Prime Minister the Hon. Kevin Rudd MP at its 11th Annual Dinner, the most prestigious event on the Centre's calendar. The dinner attracted an audience of more than 550 leaders which included senior representation from business, politics, and academia.

Prime Minister Rudd called this century the "Asia Pacific Century" and said there was a need for strong and effective regional institutions "that will underpin an open, peaceful, stable, prosperous, and sustainable region" and to address "collective challenges that no one country can address alone." Stressing that Australia needs to anticipate and shape, rather than "simply reacting" to the "historic changes" in the region, Rudd outlined a bold vision for the formation an Asia-Pacific community by 2020—a regional institution operating on the principle of cooperation, spanning the entire Asia-Pacific region (including the United States) and "able to engage in the full spectrum of dialogue, cooperation, and action on political matters and future challenges related to security."

The prime minister also announced the appointment of the Centre's founding director, Richard Woolcott AC, who as the special envoy will take Australia's proposal to the Asia-Pacific leaders. Woolcott commented that "this fits neatly into the concept of greater middle-power diplomacy. If the US or China or Japan or some other big power were to suggest it, other nations might be apprehensive and back away. It's better for a middle power like Australia to take the initiative."

Listen to an excerpt