The Spirit of the Japanese Constitution 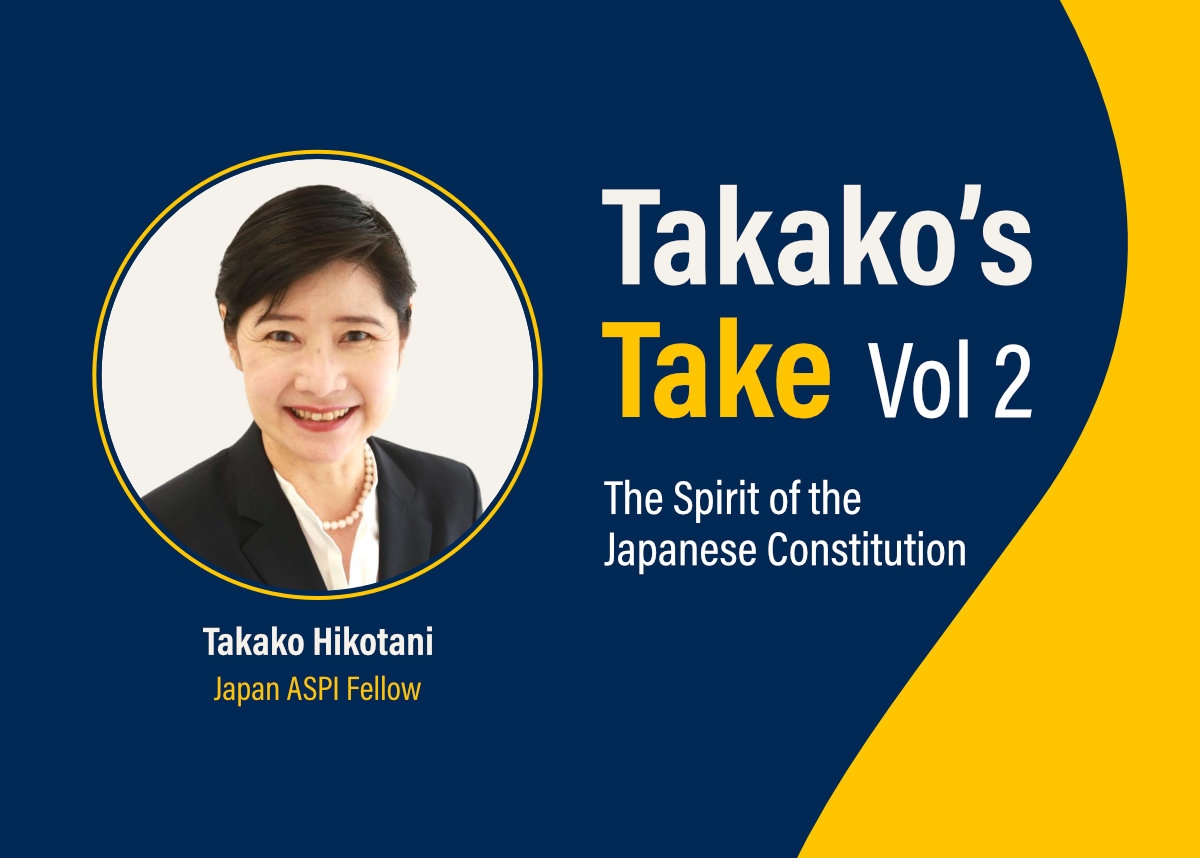 Starting in April 2022, Japan ASPI Fellow publishes a monthly column, “Takako’s Take”. The column will cover a vast array of topics that is newsworthy as well as new developments in Japan’s public policy debate that will shed light from the ground.

This year, the headlines of the poll results suggest that the Japanese public are more willing to change the constitution. Before we jump to the conclusion that constitution reform is imminent for the first time in 75 years, we need to ask the following questions: why has it not changed for such a long time, and why now?

University of Tokyo political scientist Kenneth McElwain, in his fascinating research, suggests that the structural characteristics of the Japanese constitution has led to its longevity. First, the Japanese constitution is short, with 4,988 words compared to the average of 21,000 words among Constitutions around the world. Second, there is less specificity in the governance structure compared to individual rights, and specific provisions are deemed to be provided by law. For instance, the constitution is not specific about election systems, while the Public Office Elections Act has been changed 58 times in the past. And last but not the least, the past 75 years have been a period of growth and stability for Japan, with no internal rifts or social tensions that may have called for revision of the constitution.

It is also important to note that the Japanese public have not been consistently against constitutional revision. As Shiro Sakaiya of University of Tokyo shows in his book overviewing public opinion poll results since the end of World War II, the Japanese public was never uniformly or consistently opposed to changing the constitution, and there was an uptick in interest for constitutional revision in the late 2000s but receded somewhat in the 2010s.

But now, for the past three years, percentage of those who support constitutional revision is grown steadily, from 32% in 2020 to 35% in 2022 (NHK Poll). Why is this the case?

Altogether, as the numbers suggest, there is no definitive or overwhelming momentum for constitution reform, since the percentage of those who support revision outnumbers those who are against but not by a wide margin. But if there is a momentum for change, it may be driven at least in part by the growing sense of insecurity. This reminds me once again, of the Preamble of the constitution, especially the following two paragraphs.

We, the Japanese people, desire peace for all time and are deeply conscious of the high ideals controlling human relationship, and we have determined to preserve our security and existence, trusting in the justice and faith of the peace-loving peoples of the world.

We desire to occupy an honored place in an international society striving for the preservation of peace, and the banishment of tyranny and slavery, oppression and intolerance for all time from the earth. We recognize that all peoples of the world have the right to live in peace, free from fear and want.

The first paragraph has been criticized by some that it encourages “wishful thinking:” that a country will not be attacked as long as they declare that they are peaceful. From their point of view, trusting the peace-loving peoples of the world is not only dangerously optimistic, but counterproductive to peace. While I do not necessarily endorse this view, the increasingly challenging security environment in East Asia, together with the war in Ukraine may have been a harsh reminder that security and existence of one country can easily be taken away, and that perhaps “trusting in the justice and faith of the peace-loving peoples of the world” may not be sufficient to keep ourselves safe.

If so, the second paragraph reminds us of another consideration: how can we “occupy an honored place in international society,” and strive for preservation of peace for all time and for all people? If we are going to “step up” in how much we spend to provide for our own defense, we also need to consider what we can do for others to live in peace, free from fear and want, in order for us to live together in a secure world. How can Japan occupy an “honored place” in the world? This question is not new, and has been debated for many years. The preamble may be eventually revised along with the rest of the constitution. But at this moment of reflection, the spirit of the preamble seems particularly relevant for Japan in charting our way forward.