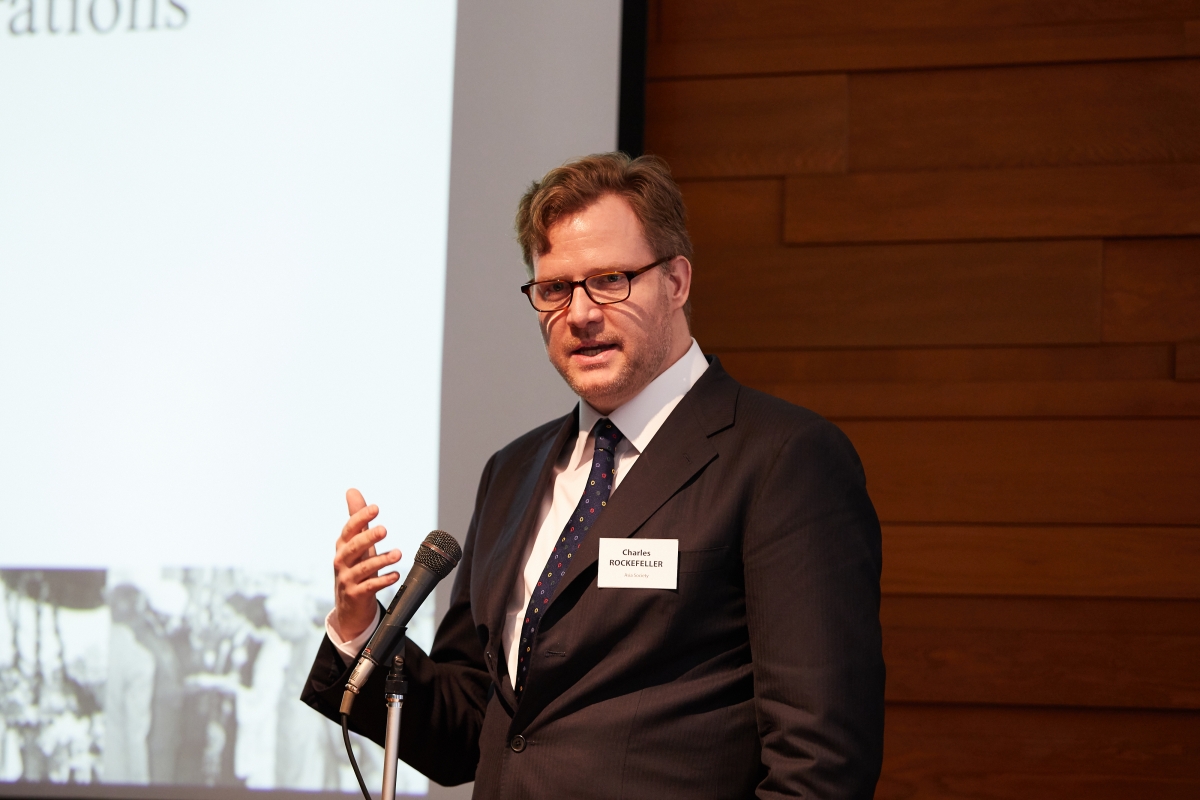 Charles Rockefeller at the International House of Japan, March 2018.

Asia Society Trustee Charles Rockefeller, grandson of Asia Society founder, John D. Rockefeller 3rd, delivered a keynote address on the occasion of the launch of the Asia Society Japan Center, and the kick-off forum for the Asia Pacific Young Leaders Program at the International House of Japan. Rockefeller spoke of his family’s long-standing ties with Japan and the Asia-Pacific.

Speech at the International House of Japan

Thank you, James, for your very kind introduction. It is my great pleasure to be part of the kick-off forum of the Asia Pacific Young Leaders Program. To join representatives of leading institutions in the Asia Pacific, including those my grandfather, John D. Rockefeller 3rd, founded is a privilege.

James has already given you a historical overview of what John D. Rockefeller 3rd accomplished and how his vision is very much alive and relevant today. So, I will focus my talk on my family ties to Asia and Japan to illustrate how the Rockefeller family has been committed to this region for over a century. 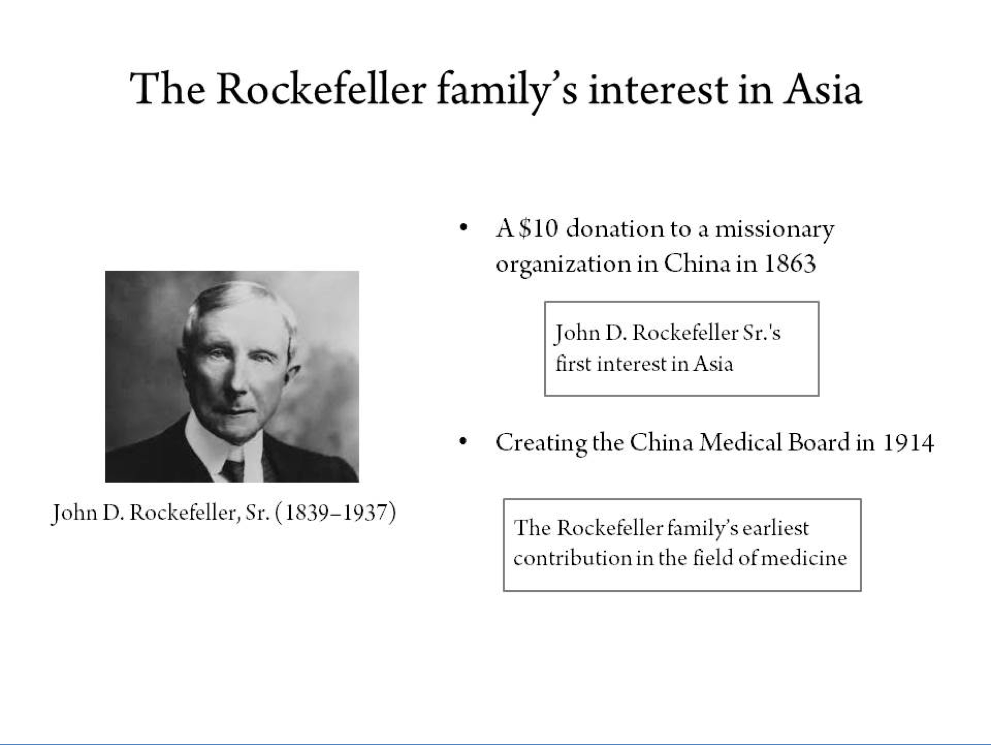 As James shared with you, John D. Rockefeller 3rd helped found many Asia-focused institutions in the ’50s and ’60s. The Rockefeller family’s interest in Asia, however, took root long before that. It may be said that the first steps leading to the creation of these institutions were taken in 1863, when then-24-year-old John D. Rockefeller, my great great grandfather, recorded his first interest in Asia — a $10 donation to a missionary organization in China.

The Rockefeller family also made a significant contribution in the field of medicine by creating the China Medical Board in 1914 with the purpose of improving medical training and care in China. That engagement would progress – and grow – through the generations. 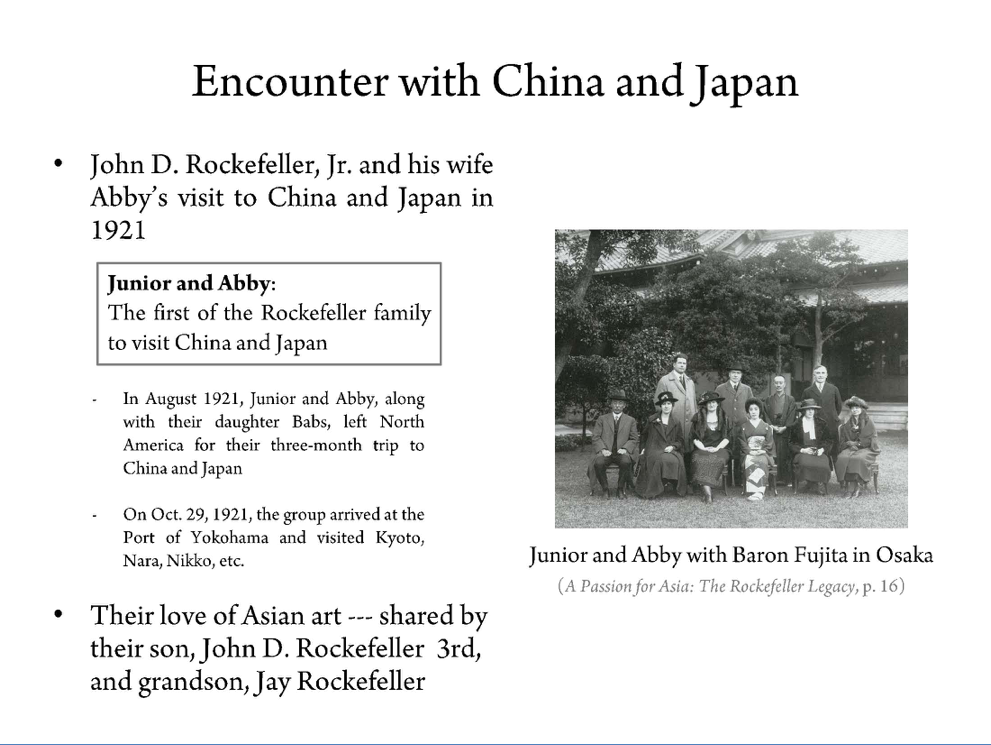 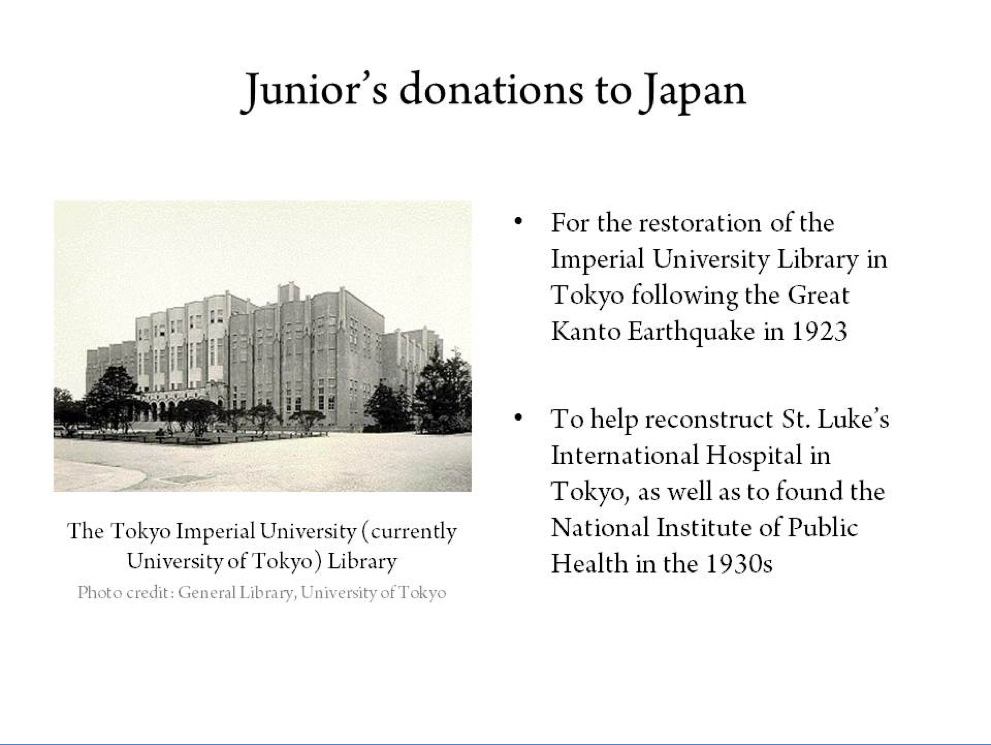 My great grandfather made donations to Japan, but the one that had a profound impact was contributing to the restoration of the Imperial University Library in Tokyo, after the Great Kanto Earthquake and fire in 1923 destroyed its library.

Other donations he made included contributions to St. Luke’s International Hospital in Tokyo and the National Institute of Public Health in the 1930s. 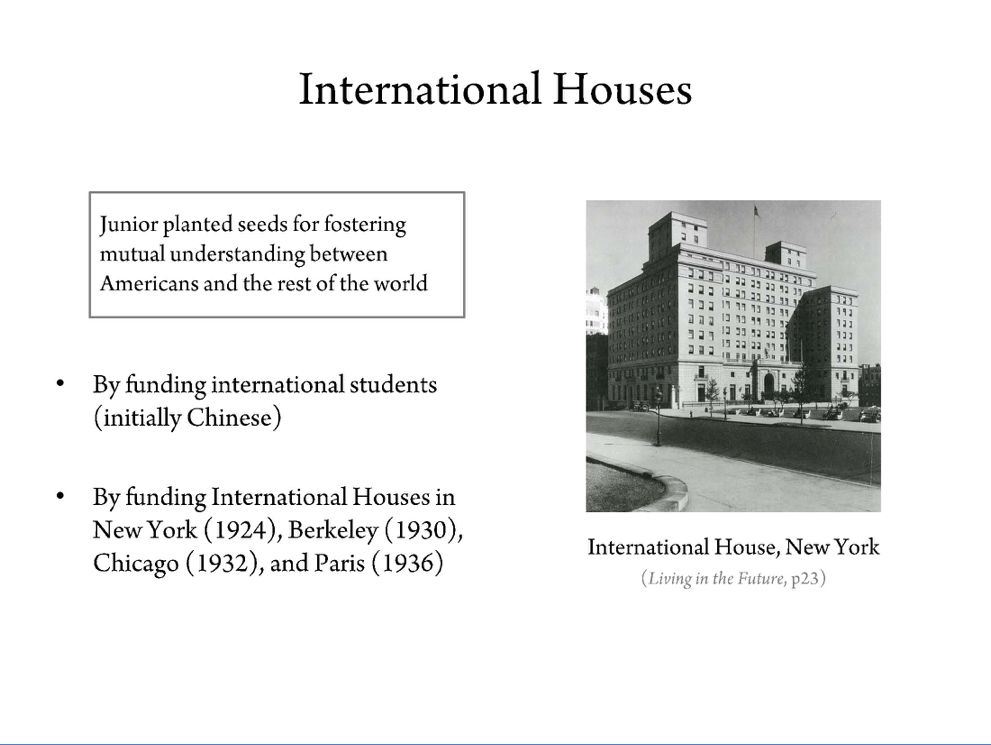 Junior also planted seeds for fostering mutual understanding between Americans and the rest of the world by funding international students (initially Chinese), to live with American students. The idea of such a place was formulated by Harry Edmonds, the secretary of the Upper Manhattan YMCA. Junior first funded an International House in New York in 1924. 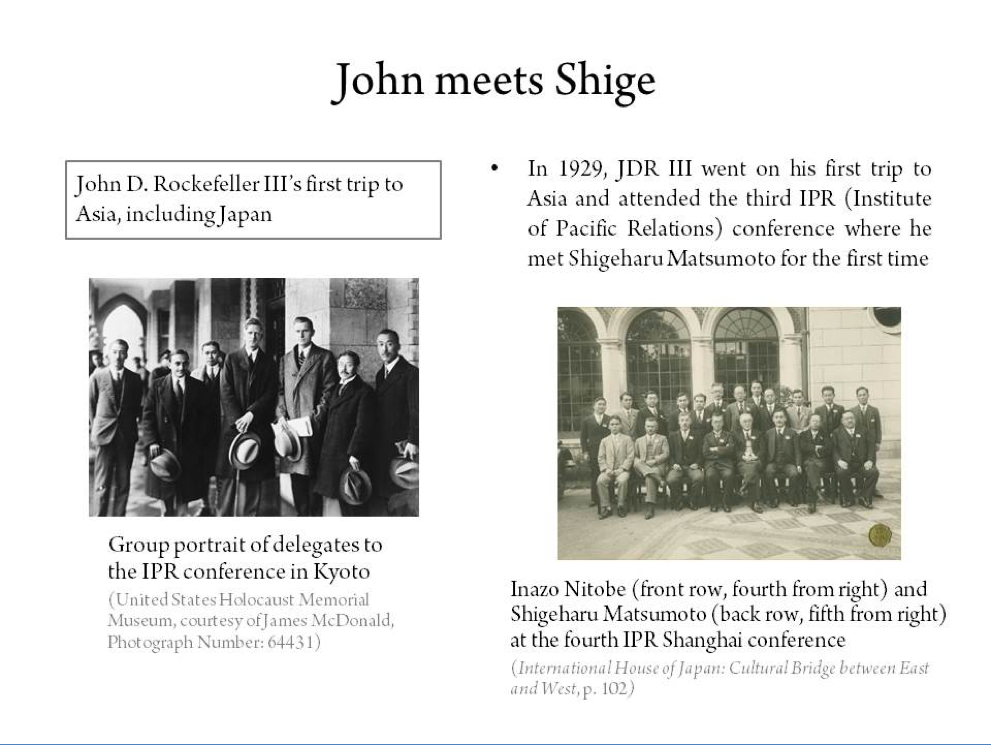 In 1929, as the crash of Wall Street rippled through an already tumultuous Asia, John D. Rockefeller 3rd embarked on his first trip to Asia as a newly-minted graduate of Princeton University. It was during this trip to Asia in 1929 when JDR III first met Shigeharu Matsumoto (Shige), with whom he later founded the International House of Japan, at the Institute of Pacific Relations conference. John was 23 and Shige was 30.

This trip of JDR III would forever shape his worldview—namely, that Asia held great potential; that it was poorly understood by Americans; and that understanding and respect were essential to a more peaceful and prosperous world. 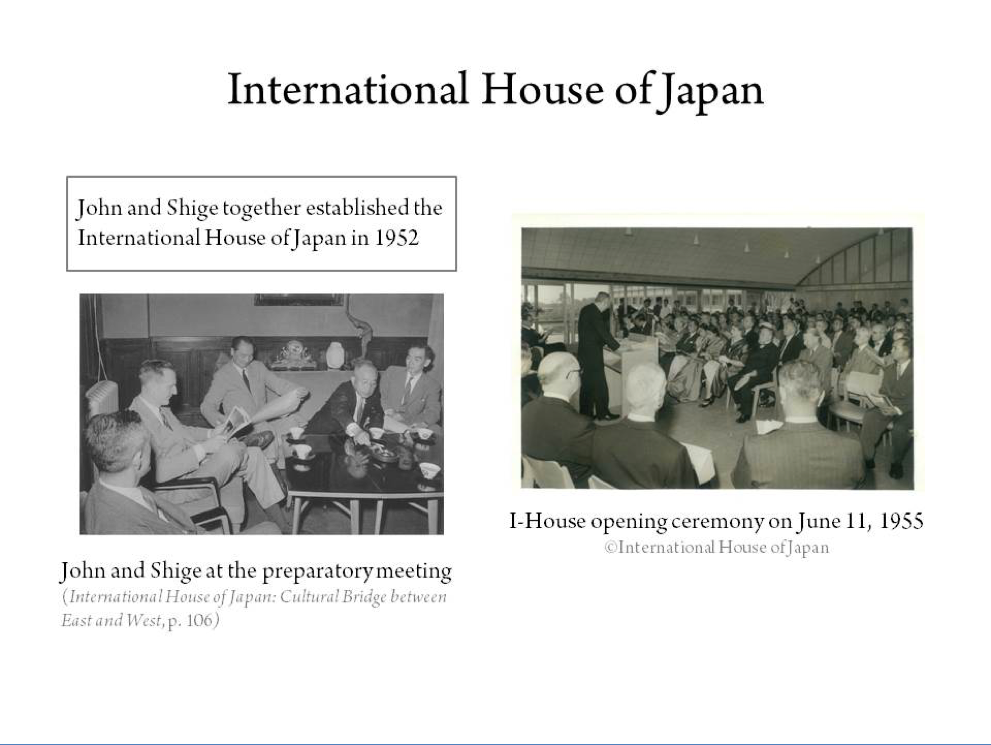 After World War II, at the beginning of 1951, 22 years after his first visit, John came to Japan as a member of a delegation headed by John Foster Dulles, who was assigned by President Truman to negotiate the provisions of the peace treaty with Japan. During his stay in Japan, John reunited with Shige. Together, they founded the International House of Japan in 1952. 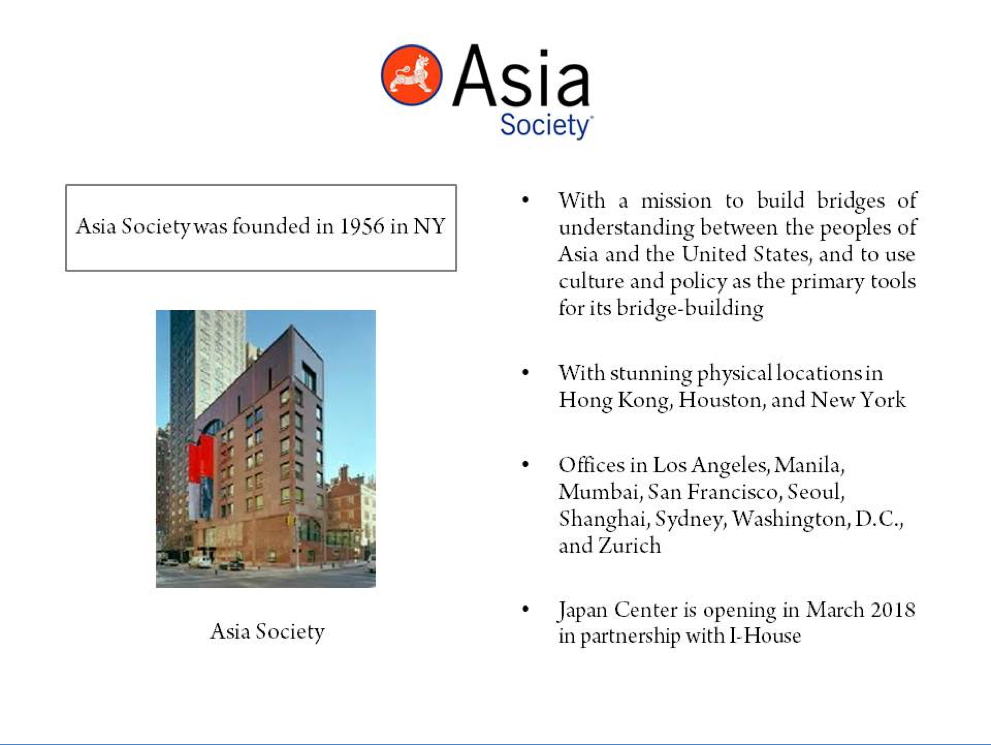 Five years later, as Asia began lifting itself from the wreckage of war, John founded Asia Society on June 28, 1956, with a mission to build bridges of understanding between the peoples of Asia and the United States, and to use culture and policy as the primary tools for its bridge-building. By then John had traveled extensively in Asia—beginning in Japan and China, but then in Southeast Asia as well. He said he believed in “the shared hopes, fears and aspirations” of Asians and Americans. He was, to say the least, well ahead of his time. Not many people were touting the potential for Asian growth and influence in those days. And to this day, six decades on, this wisdom and lofty vision are ingrained in the very identity of the Asia Society, particularly as the continent of Asia has risen in every way imaginable: influence, power, income, and, of course, in terms of the level of interest from the rest of the world.

JDR III went on to establish or help establish more institutions in Asia, such as the Ramon Magsaysay Award Foundation in 1957, International Rice Research Institute (IRRI) in 1960 which later brought about the Asian Green Revolution, India International Centre in 1962 which was inspired by International House of Japan, and the Asian Cultural Council in 1963. All of these institutions still exist today and continue to contribute to the peace, stability and prosperity of the Asia Pacific. 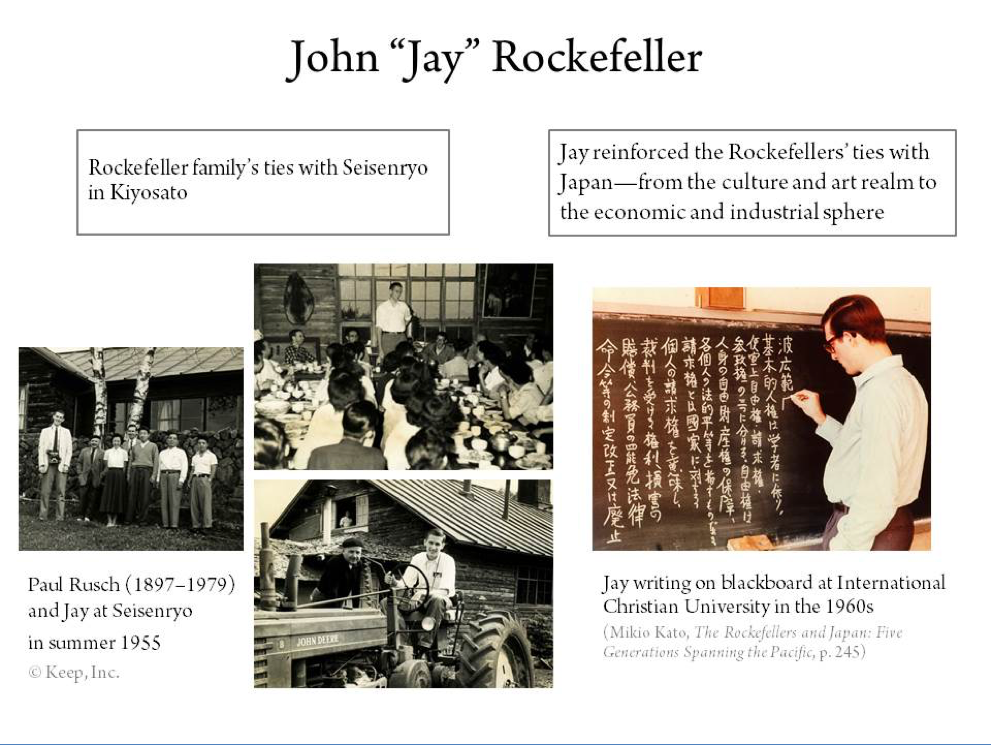 I would also like to mention the strong ties my father Jay Rockefeller has had with Asia, especially Japan. Jay accompanied his parents, JDR III and Blanchette, to Japan in the summer of 1955 on the occasion of the opening of the International House of Japan. While JDR III and Blanchette spent the rest of the summer in Karuizawa at the summer house of the Idemitsu family, my father Jay traveled around Hokkaido by bicycle. The family also spent some time in Kiyosato Seisenryo, which also had strong ties with the Rockefeller family. My father visited Kiyosato again on his honeymoon more than a decade after his first visit there.

I am scheduled to visit Karuizawa and Kiyosato next week, and I am very excited to visit the places my parents and grandparents visited. After studying at Harvard for a year after this memorable summer, my father came back to Japan to study for three years; two and a half years at International Christian University, and 6 months with the renowned painter Uemura Shoko in Kyoto.

It was my father Jay Rockefeller who extended the special ties of our family to Japan from the culture and art realm to the economic and industrial sphere. As the governor of West Virginia and then as senator, my father made a focus of bringing Japanese business development to West Virginia. He took a number of trips to Japan to persuade Japanese companies. As a result, during his term, he was able to attract more than 20 Japanese corporations to West Virginia, including a plant of the Toyota Motor Corporation. I am happy to say that Japanese investment has indeed been a key part of West Virginia’s economic development strategy.

After all these years of my family involvement in Asia, I am delighted to stand here on this commemorative occasion to embark on the ambitious project to connect various organizations in the Asia-Pacific region and the young leaders that they have produced.

I truly hope that this endeavor will succeed and contribute to the peace and prosperity of the region and of the world.

Thank you for your kind attention. 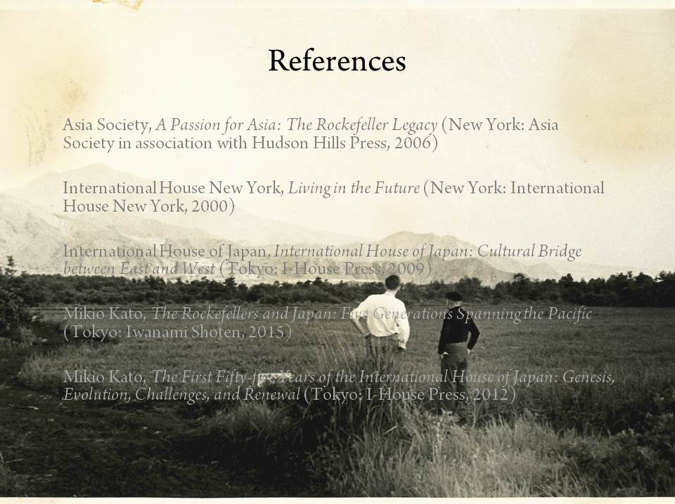