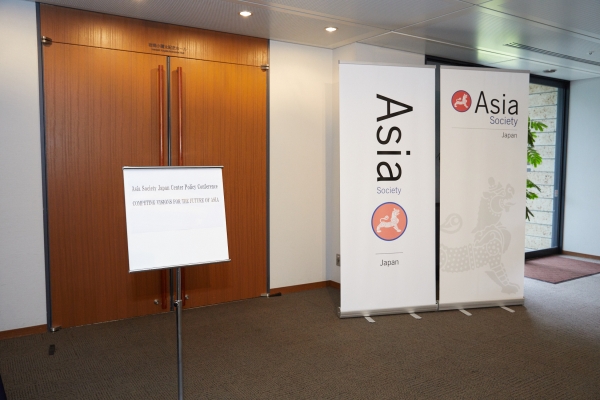 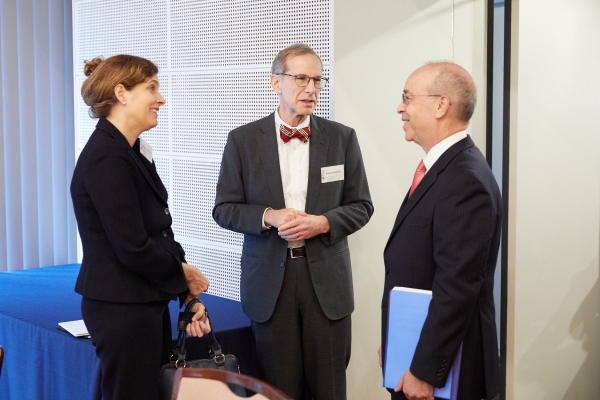 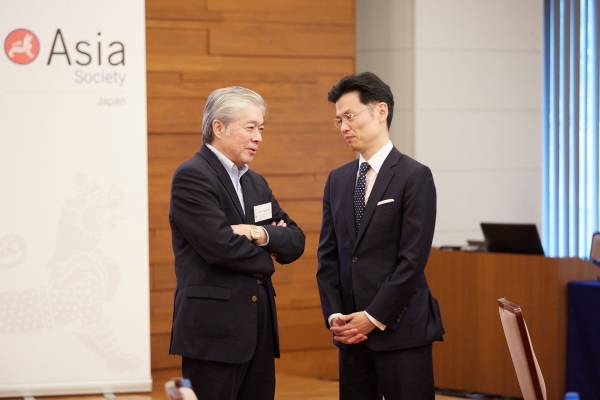 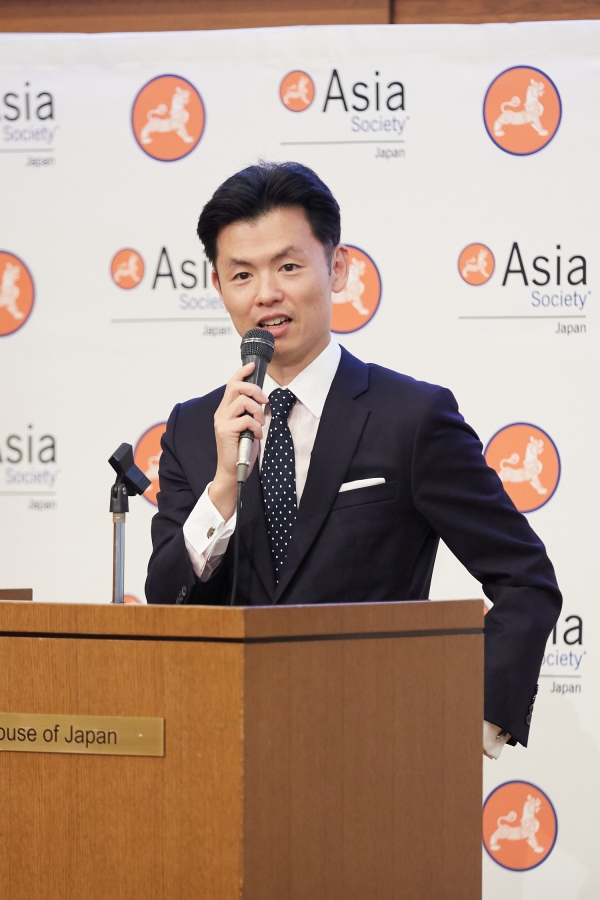 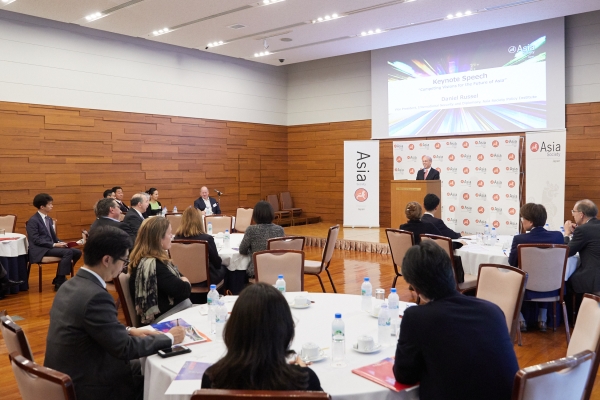 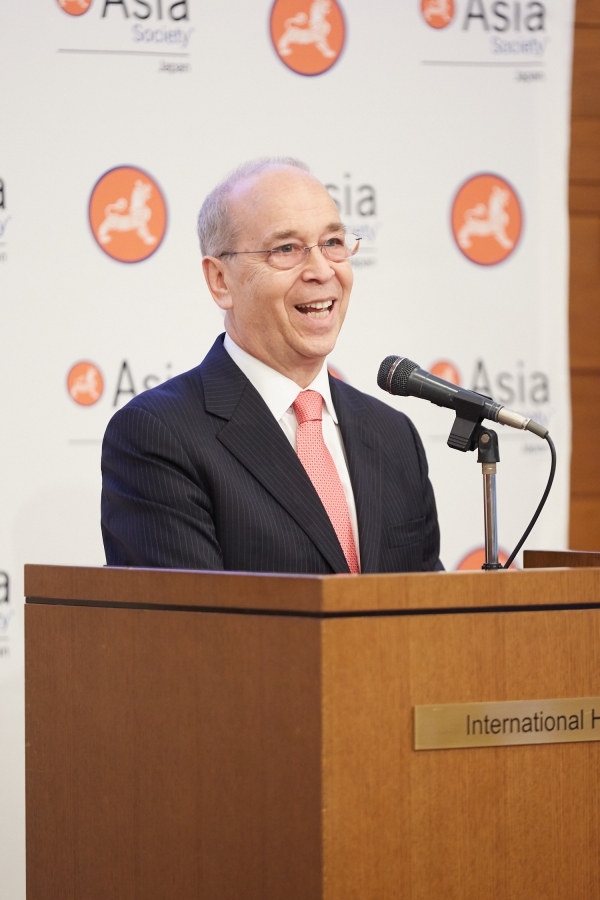 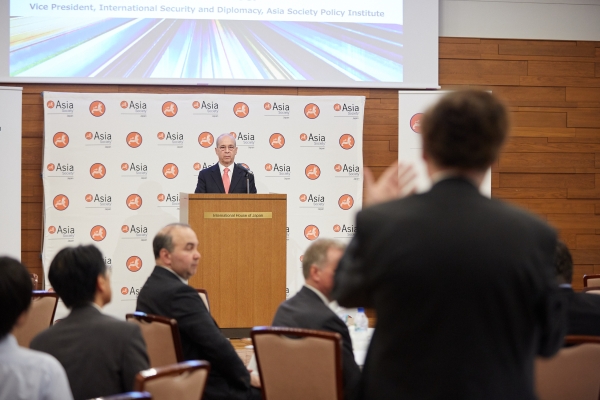 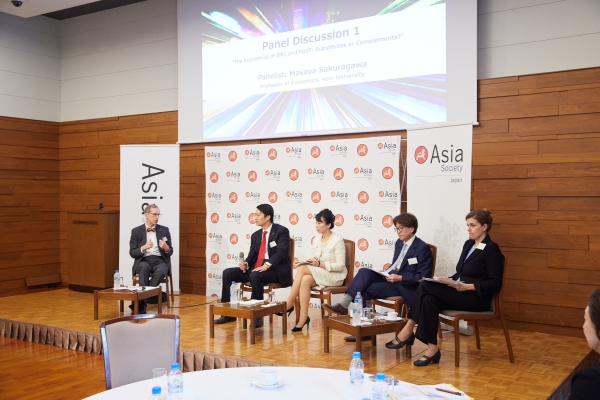 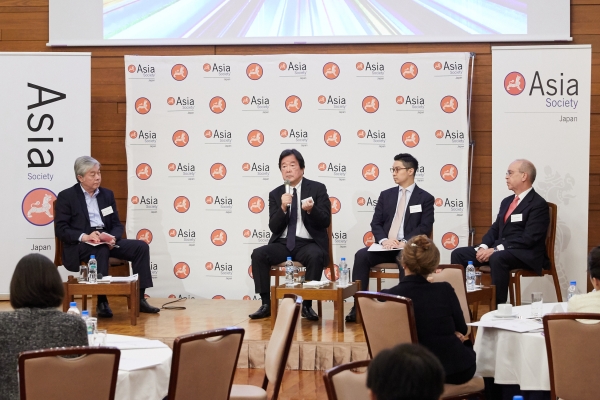 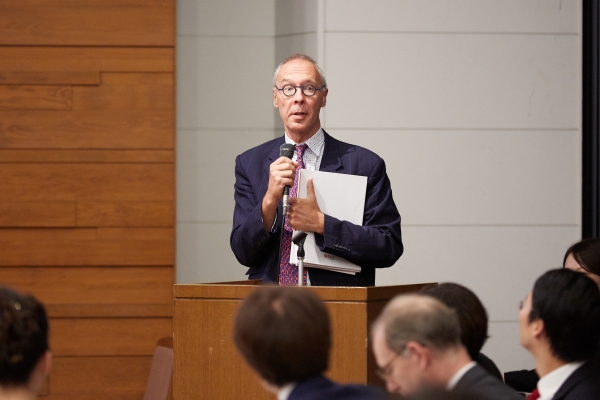 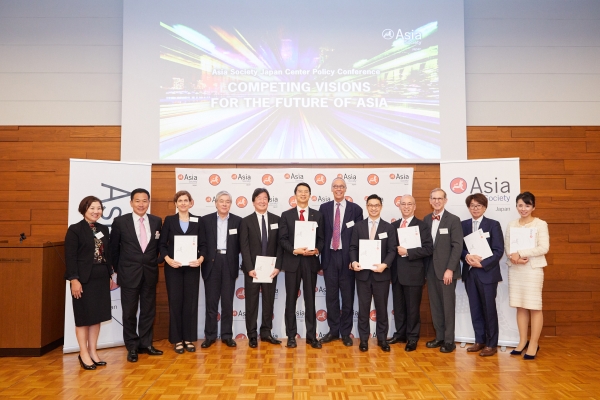 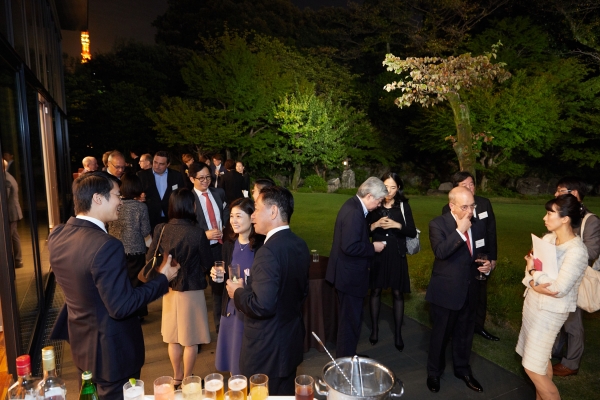 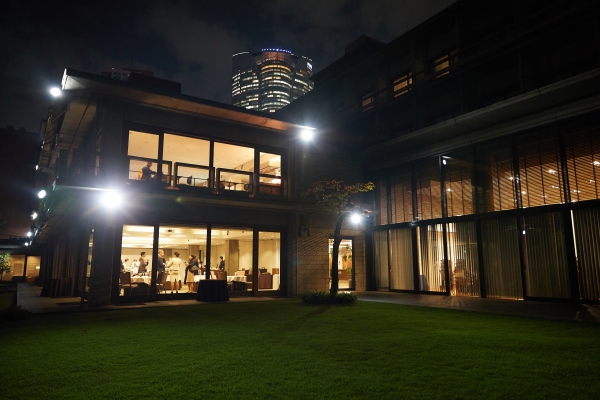 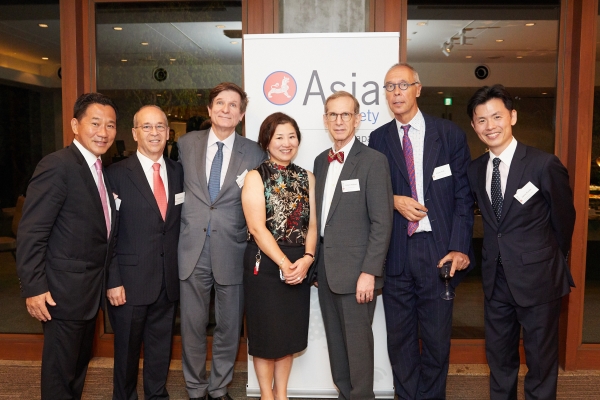 There are two competing visions for the future of Asia, China’s Belt and Road Initiative (BRI) and the west’s Free and Open Indo-Pacific (FOIP). On one level, the competition between BRI and FOIP is a geopolitical rivalry. At a deeper level, it is two competitions, one between capitalism vs socialism, and another between democratic vs. authoritarian rule. The conference  explored these issues in depth, with experts from many countries seeking an approach that promotes peace and prosperity of the entire region.

There has always been a debate over what Asia should look like. When we start thinking about the alternate visions for the region, we might begin by exploring the difference between the “American Dream” and the “China Dream.” The essence of the American Dream is that it can be shared by everyone and promises unlimited opportunities for everyone. There is no copyright on the American Dream and it has thus been replicated in Japan and around the world, because in essence, it is a universal human dream for the pursuit of happiness. In contrast, the China Dream seems to be a Sino-centric approach, meaning restoring China’s place as world leader.

What exactly does the China Dream offer to Asia and the world? Is there an export model of the China Dream that other countries can share in? The Belt and Road Initiative (BRI) is that vehicle by which the China Dream seems to connect with other countries. There are diverse perceptions of BRI, partly because they reflect personal attitudes towards China than BRI itself and also because there are multiple drivers behind the initiative. In addition to its stated goal of infrastructure development, BRI is an approach to the country’s export surplus capacity, boosting exports through dedicated transportation corridors, using the huge capital account surplus accumulated from exports and inbound FDI, dealing with the Western Provinces, countering terrorism, energy security, internationalizing the Yuan, Big Data as “the oil,” and geo-strategic developments.

Despite these varied views, there is consensus that BRI has come to serve as an important vehicle for Chinese influence. And China is gaining higher profile in regional and global institutions that include the U.S. and creating new ones that do not. China’s “swaggering” on the international stage has been helped by Donald Trump’s abandonment of multilateralism and many other traditional aspects of U.S. leadership.

Discussions following the keynote speech covered the Obama Administration’s strategies to deal with China, the effectiveness of engaging in dialogue with China, the agenda and leadership in Hong Kong, and the role Europe will play.

Panel Discussion 1 “The Economics of BRC and FOIP: Substitutes or Complements?”

Mr. Robert Feldman started the panel discussion by pointing out that our key objective is to achieve peace in Asia through prosperity, and questioned whether the competing approaches of BRC and FOIP were complementary in achieving our goal and whether they are large enough to solve the problem.

In Ms. Mihoko Kashiwakura’s initial comments, she indicated that human capital is a forgotten element in economic statistics and that 10-30% difference of per capita GDP is attributable to how countries make human capital investment. Fifty-six of the world’s population living in extreme poverty reside across Sub-Saharan Africa, and the remainder in emerging economies like China and India. These economies will potentially grow by nearly 100% in 2050 as a result of increased human capital investment.

Professor Masaya Sakuragawa highlighted important aspects of Chinese hegemony, including  investment and technology. Hidden behind the notorious trade war between the U.S. and China, is competition over investment between BRI and FOIP. The question is whether the U.S. and Japan can supply money to Asia with their increasing sovereign deficits? Prof. Sakuragawa mentioned that the record low global interest rates may be advantageous for the continuity of the FOIP. Another key essence of China’s hegemony is technology. Yet, China has its weak points, including its isolated approach of not respecting democracy, market-based systems or international rules, as well as its currency issues.

Mr. Winston Wenyan Ma’s initial comments covered the technological essence of BRI. The “Belt” was meant to be the connection from China through Central Asia and Central Europe to Rome. The maritime Silk Road goes through Southeast Asia, across Africa to the Mediterranean. With its growing population, Africa will be an important player of the future market. The digital aspect is essential because: 1) digital connectivity is not limited by geography; 2) because the digital economy will be the engine of future economy, it will be the key to sustainability; and 3) infrastructure gaps may create larger digital gaps. China enjoys the advantage of cheaper high-quality IT products and already has a high penetration rate of smartphones and other digital devices, but other parts of the world have yet to catch up. Digital literacy education will needed for people to be relevant to a digital economy. Without this infrastructure, people can be left out of the game and jobless. Generally, the expansion of digital technology in China creates so much monopoly power that growth is actually constrained.

Professor Heather Montgomery talked about maintaining financial system stability. One answer is to seek blended financing. Chinese banks have yet to develop expertise and competency on evaluating projects based on return, taking into account political and economic risks. While many poor and indebted countries are taking on more debts, some research results show that a large amount of debt has been renegotiated and in some cases cancelled, implying a new ideological approach to development. Despite many skeptical views about the internationalization of the yuan, while China has benefitted from the strong dollar, it has not always been positive for the U.S.

In the panel discussion, it was discussed that countries need a stronger growth platform to generate money to invest in other countries, as prospects hold that both the U.S. and China will run current account deficits. In a conversation whether social security problems would keep countries from realizing BRI or FOIP, it was pointed out that China has yet to formulate a social security system and that future developments could pose a challenge, but that on the other hand, a social security system would not be funded by foreign monies and thus should not be mixed with BRI. Regarding involving the private sector, new trends of building new platforms to bring in capital for R&D and access and delivery were introduced.

It was also noted that what Americans call the Asian financial crisis is referred to as the “IMF crisis” in many Asian countries, and that this difference in perspective implies their desire for an alternative solution. In contrast, the similarities of seemingly conflicting values were pointed out. Japan’s role in balancing philosophical differences in data governance was also highlighted.

Mr. Hitoshi Tanaka offered two assumptions: China will continue to rise and the U.S. will continue to ignite. Therefore, the agenda today is how to avoid real confrontation between the two countries, and Japan bears an important role in the stability of the region. One approach would be Japan assuming a dual engagement policy, taking a functional approach across various areas including trade, environment, energy, and cyber, and making China respect rules, while strengthening constructive security ties with the U.S. Mr. Tanaka stressed the importance of pursuing a confidence-building mechanism, modelled on the Six-Party Talks

Mr. Ronald W. Chan commented that Hong Kong is at a crossroad between east and west. During the past twenty years, Hong Kong’s share in China’s GDP has dropped from 20% to 2%. Hong Kong is being marginalized, and young people do not have the choice of moving up the social ladder so they move out to the streets to protest. After the 1997 handover, Hong Kong has not had an effective government, as public servants who were used to following UK demands had no clue to what to do under Chinese rule. In the 1990s, China tried to close the gap between coastal areas and western parts of the country and invested in massive infrastructure development and creating opportunities. However, the total GDP contribution in the west has only risen by less 2%, and per capita income is one-fourth to one-third of that of coastal cities. Hence, Xi Jinping decided that integration of Eurasia through BRI would be the most effective solution to economic stability, China’s main goal.

Mr. Daniel Russel pointed out that Donald Trump did not just pop out of the blue, but that there are some drivers behind the Trump experience that are not new to American history. The U.S. is toggled back and forth between isolation and internationalization. What is novel about the Trump administration is the degree of domestic focus and its power to mesmerize people to the extent that they are no longer aware of what is going on in the rest of the world. The irony of the relative American decline in absolute power is that the U.S. set out to reduce its share of power by creating multilateral institutions, establishing rules, and setting boundaries on the U.S., partly as a strategy to build up the rest of the world after the Second World War. The theory was that it is better to have a nice in a great neighborhood than to have a great big house in a terrible neighborhood. Emerging nations have had to respect the universal rules, but while China supports the idea that all countries are equal and need to respect common rules, its understanding is that the strongest party can outsmart the system. Therefore, today there is a fundamental divide between universal rules and a more regional system. The U.S. will eventually learn from the aftereffects of the Trump experience and shift back to a more cooperative system.

Are we returning to a pre-Trump system or will current trends continue? It was pointed out that under BRI, Hong Kong, again stands in the middle as an mediator with arbitration standards meeting international standards. How will Hong Kong leverage on the one city one country system to become a super-connector among Asian countries and the U.S.? Imposing tariffs for national security purposes, the U.S is no longer the world’s policeman. That said, climate change could be a threat that could drive the U.S. back to “the norm,” but even if it does make a comeback, it will be to a different world, where we can no longer expect the good intentions that marked the post-war period. America First means “every man for himself” and it would not be surprising if other countries embraced similar ideas.

In a discussion on the Japanese government’s view of the U.S.-China conflict, it was questioned whether current trends were not favorable for Japan. China leaning towards Japan could be advantageous. The U.S. President wanting to have good relations with Russia could make it easier for Japan to negotiate the Northern Territories. Trump’s dissatisfaction with the U.S.-Japan treaty could be favorable for those who wish to increase the military and revise the Constitution.

Japan’s role would be to let the U.S. return to internationalism, but it is also true that U.S.-China relations have opened windows for improvement in Japan’s bilateral relations with China and Russia. We must be sure to change China to some extent and would like to see other countries, including the U.S. join in our efforts. Hong Kong also bears an important role in facilitating regional relations with China, and in this context, the Greater Bay Area holds many promises.

Discussions with the floor covered how Japan could take part in the global digital technology competition, considering that many developments have been spinoffs of military technology.   Other topics included India’s role in hedging the Chinese and the U.S. and developing cooperative mechanisms. It was also pointed out that China will eventually face large challenges with its internal consistency – the one state two systems approach and the reluctance against reform while pursuing economic growth. Although we cannot contain China, we can influence its future.