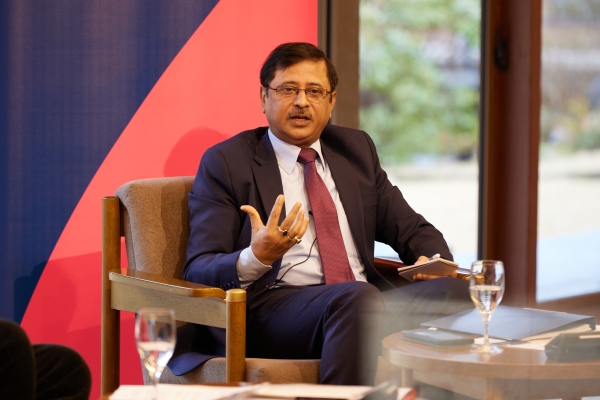 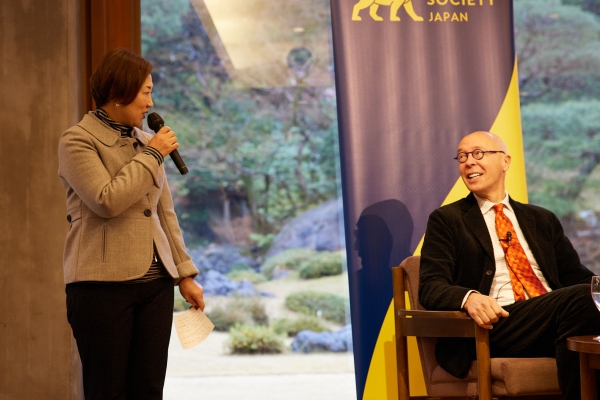 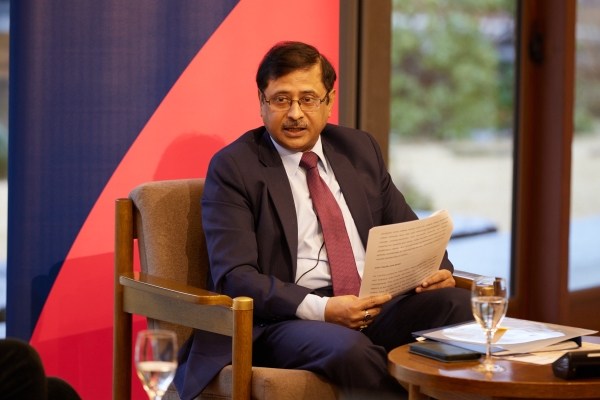 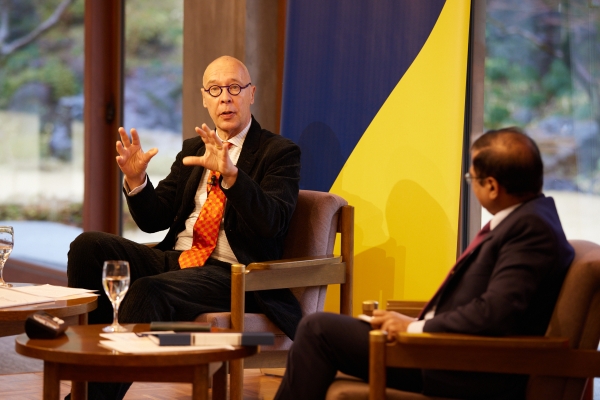 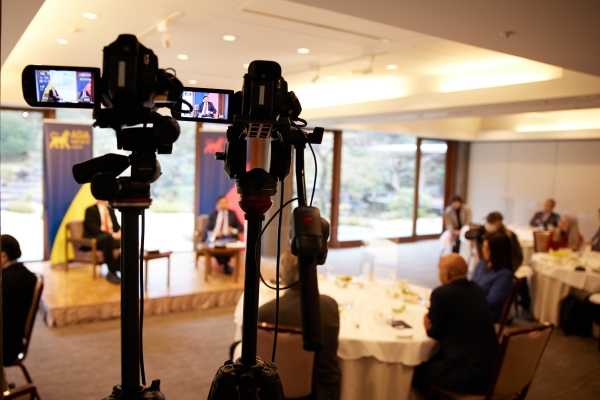 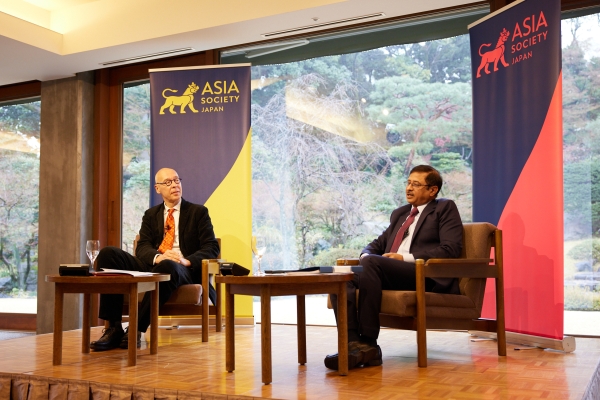 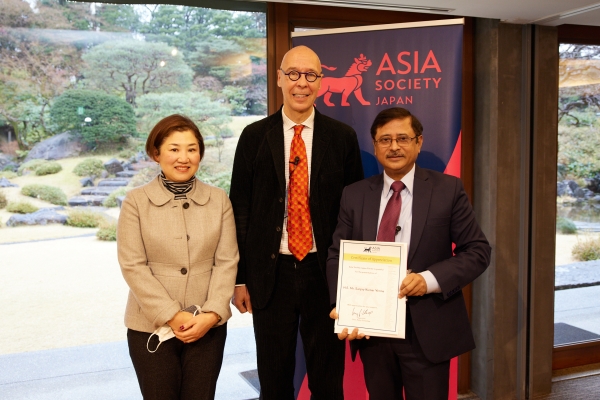 His Excellency Mr. Sanjay Kumar Verma shared his initial comments on India’s visions for a free, open, and inclusive Indo-Pacific, including Atmanirbhar Bharat, its Act East policy, SAGAR (Security And Growth for All in the Region) and the Indo-Pacific Ocean Initiative. He stressed the importance of the bilateral partnership between India and Japan, rooted in history and tradition, in various critical sectors, stressing that the India-Japan partnership is shaping the contours of regional peace, stability and prosperity. After his opening remarks, he engaged in a fireside chat with Mr. Jesper Koll.

India, with around one-sixth of the world’s population is the largest democratic nation in the world. The International Monetary Fund (IMF) has projected a 9.5% GDP growth for India this year, despite the challenges it faces recovering from the global pandemic.

Under its “Atmanirbhar Bharat” vision, which translates to a self-reliant India, the nation seeks to become a trustworthy global supply chain hub. Ambitious structural reforms have been launched to gradually deregulate economic sectors and to enhance good governance and global competitiveness. Private sector participation has been encouraged in critical areas, such as critical minerals, defense, civil aviation, power distribution, social infrastructure, space and atomic energy. The national education system has created the framework for further leveraging the demographic dividend.

India has emerged as the world’s pharmacy. It has become one of the major global suppliers of healthcare products, including COVID-19 vaccines. Information technology and innovation have also emerged as major economic drivers in India. The interplay of these sectors has been visible in its fight against the pandemic. 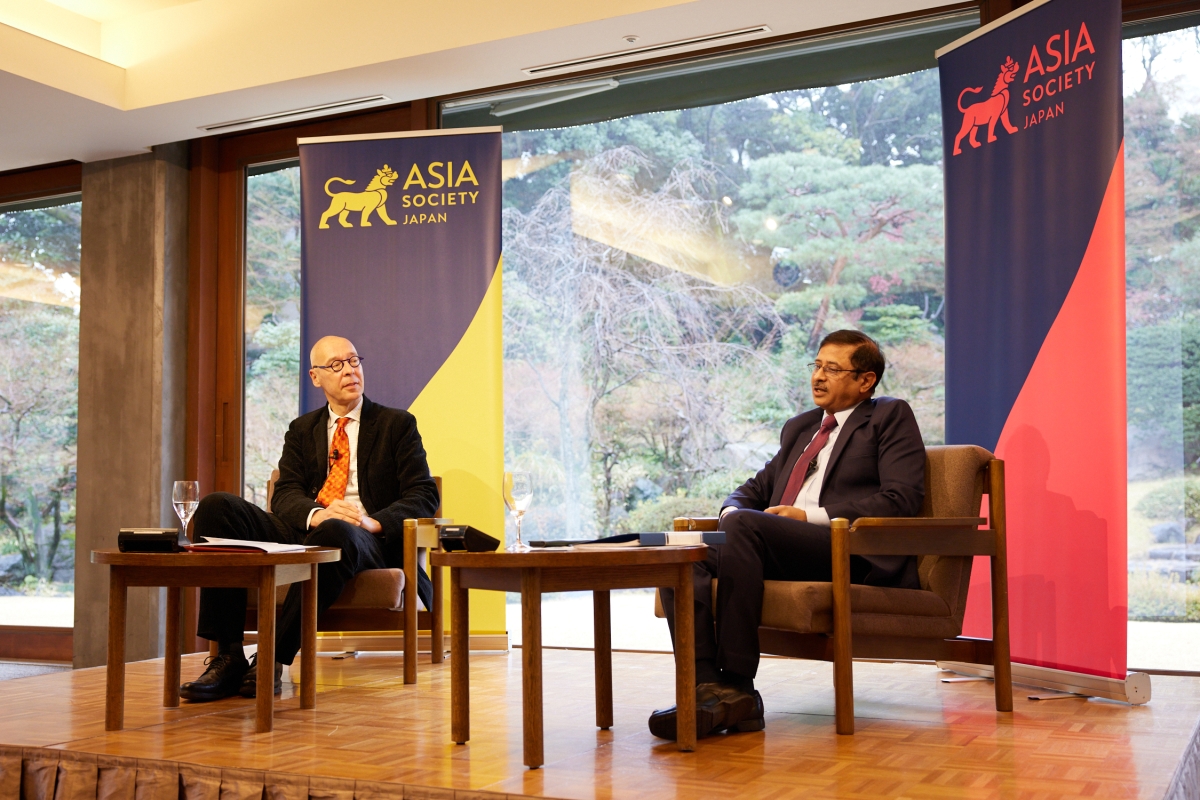 If data is the new currency, India is the largest bank

India has one of the fastest growing startup ecosystems in the world. In 2021, forty Indian startups graduated to become unicorns. India is one of the most promising ecommerce marketplaces and one of the most vibrant and innovative markets for online content and commercially promising social media landscapes. It has continued to use information and communication technologies to deliver value and services that improve the lives of hundreds of millions on of people in India and some of its partner countries. India Stack is the backbone of secured digital payment interfaces and fintech solutions, which are gaining global popularity.

India’s commitment to combat climate change was confirmed at COP26, where it announced its target of achieving net zero emissions by 2070. Reliant on coal for electricity generation, India lays emphasis on ‘phasing-down’ coal, as an immediate ‘phase-out’ will not be able to sustain India’s socio-economic growth. India has been promoting use of clean nuclear and renewable energy in its power electicity-mix, with about 38% of the total installed power generation from renewable energy sources, as in September 2011. Ammonia is being tested for co-firing with with coal, thus reducing CO2 emissions while introducing hydrogen to the energy system.

A free open and inclusive Indo-Pacific 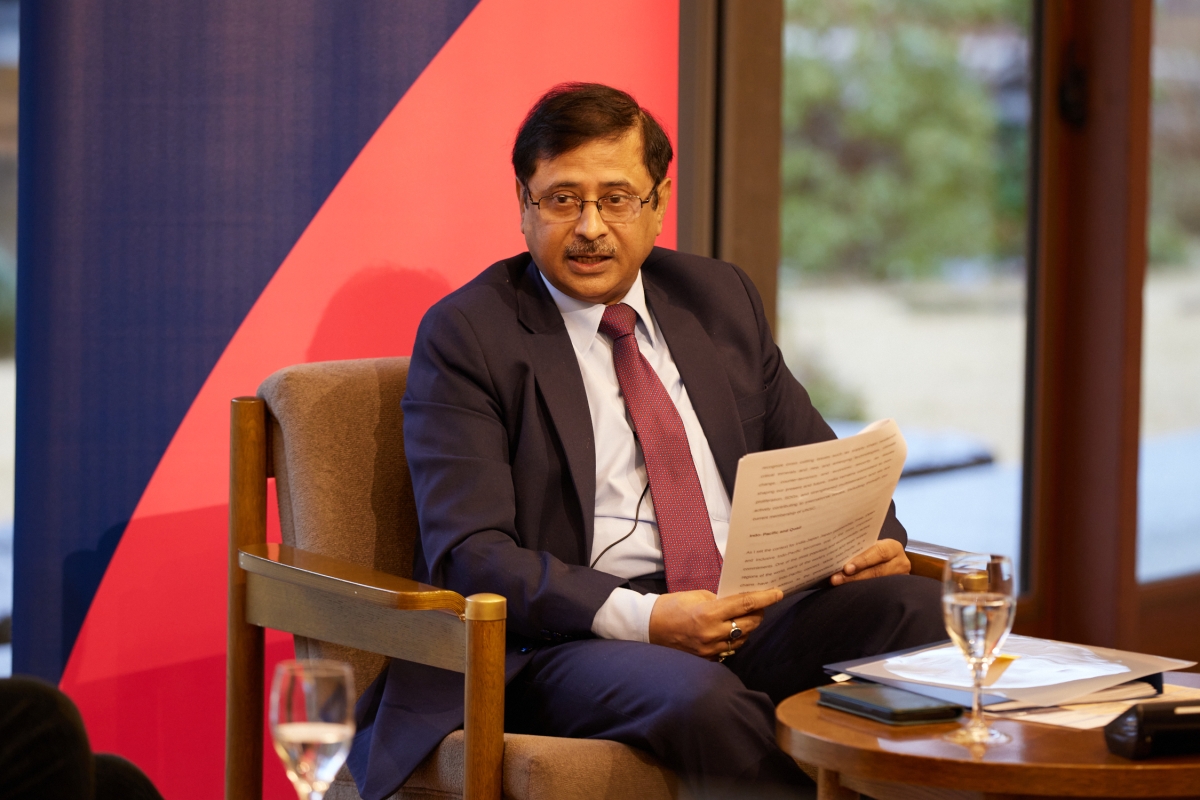 India has a unique strategic geography. It follows a ‘Neighborhood First’ policy, along with its ‘Act East’ policy. As a maritime state, it places high priority on the maritime domain, developing strategic ties with a wide range of countries and groupings. While the “Indo-Pacific” is a relatively recent addition to the geopolitical and geostrategic lexicon, India’s engagement with the region dates back centuries. Its approach to the region stretches extensively from the western coast of North America to the eastern shores of Africa, with Southeast Asia at the center.

India seeks a “free, open and inclusive” Indo-Pacific, which is one of the most economically active regions in the world, with many of the world’s critical and large supply chains having an Indo-Pacific connection. Its pursuit of an open, balanced, rules-based and stable international trade regime is reflected in its maritime doctrine, SAGAR (literally translated to be “ocean”), which pursues security and growth for all in the region. In the Indo-Pacific Oceans Initiative launched in 2019, India has been a net provider of security, a first responder and a development partner for ASEAN economies. The ASEAN bears a prominent role in India’s approach to the region.

As part of India’s engagement in the Indo-Pacific - it is a member of the Quad, which it considers to be a partnership for the global good. With its partner countries, it shares the values of respect for rules of law, sovereignty, territorial integrity, and freedom of navigation. While some have wrongly described the partnership as a military alliance, it is a way to address geopolitical challenges in the Indo-Pacific with a positive agenda. Quad seeks not to contain specific countries but aims to bridging diverse countries in the region, balancing economic relations with security concerns.

The year 2022 will mark the 70th anniversary of establishment of diplomatic relations between India and Japan, which India regards its natural partner. Rooted in history and tradition, India-Japan relations enjoy the status of a special, strategic and global partnership based on a strong foundation of shared objectives and common values. In today's fragmented, fractured, and multipolar world, the growing convergence between India and Japan on strategic and economic issues bears immense potential to shape a peaceful secure and sustainable world. 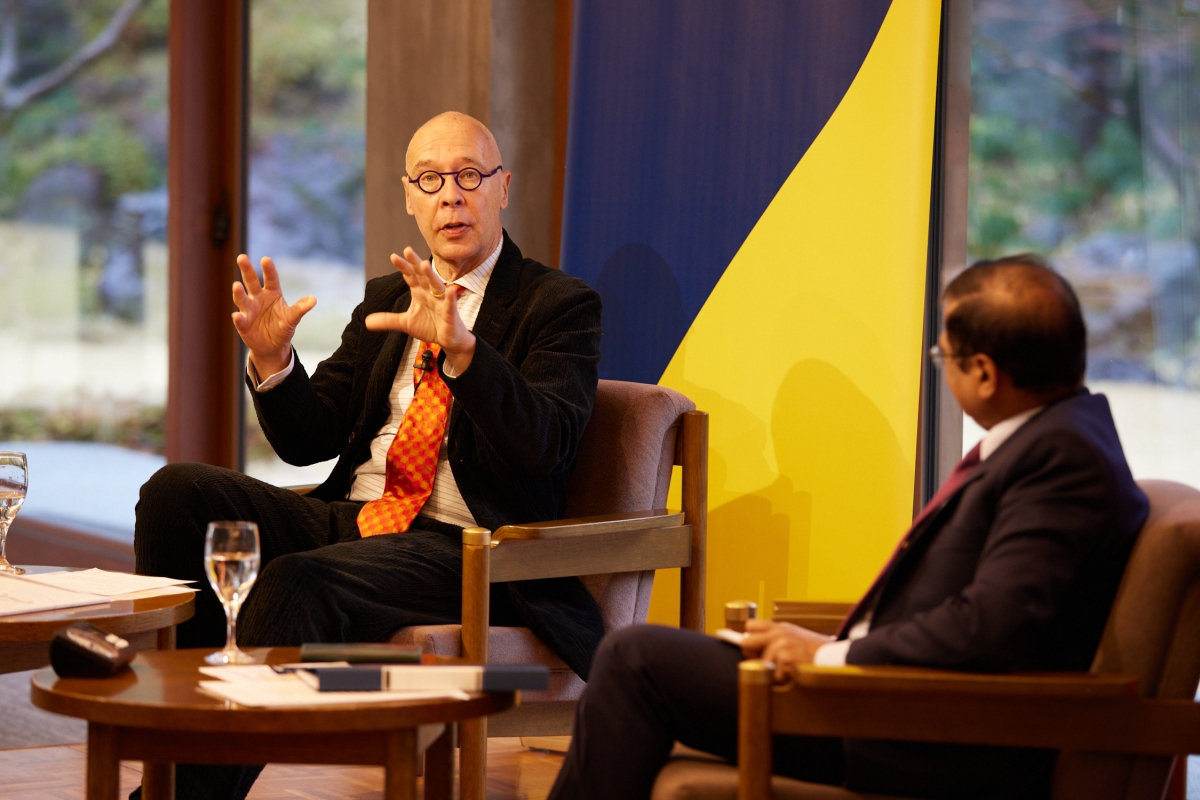 In the most recent telephone call between Indian Prime Minister Modi and Japanese Prime Minister Kishida in October 2021, the leaders agreed to further enhance and elevate their strategic partnership in a variety of areas, including high technology and futuristic sectors. India sees alignment between its ‘Act East’ policy, as well as its Indo-Pacific vision based on the principles of SAGAR and the Indo-Pacific Oceans Initiative, and Japan's free and open Indo-Pacific vision. Japan and India are also jointly exploring ways to work together in third countries of South Asia and Africa to harness their complementarities. The launch of the Supply Chain Resilience Initiative (SCRI) among India, Japan, and Australia seeks to secure end-to-end supply chains, reduce over-reliance on a single country, to ensure the peaceful resolution of disputes and respect for international law, and resist unilateral attempts to change the status quo through use of force.

Japan continues to play an important role in India's economic growth story. The bilateral partnership extends into every socioeconomic sector. Japan is actively involved in various national campaigns and flagship initiatives of India. Japan's investment in the infrastructure sector has been the core of the partnership, and today, defense production, healthcare, digital technologies, hydrogen, nuclear energy, space exploration for peaceful purposes and disaster mitigation, and critical minerals, along with other emerging strategic agenda have also become increasingly important areas of cooperation.

Today, 40,000 Indians, including more than 12,500 highly skilled professionals live in Japan. Seventeen Japanese Institute of Manufacturing and seven Japanese Endowment Courses have contributed not only to the technical training of their subscribers but also to their orientation with Japanese culture and processes. A memorandum of cooperation on specified skilled workers promises to facilitate skill-matching in important areas. India is also working to overcome the language barrier by establishing Japanese language schools in India.

Over 300 linkages have also been established between Indian and Japanese higher education institutions. While the U.S., the U.K. and other English-speaking countries are popular destinations for the pursuit of post-graduate studies, students look at Japan as a place where they can deepen their professional experience. Many also choose to come to Japan for employment opportunities after academic research. 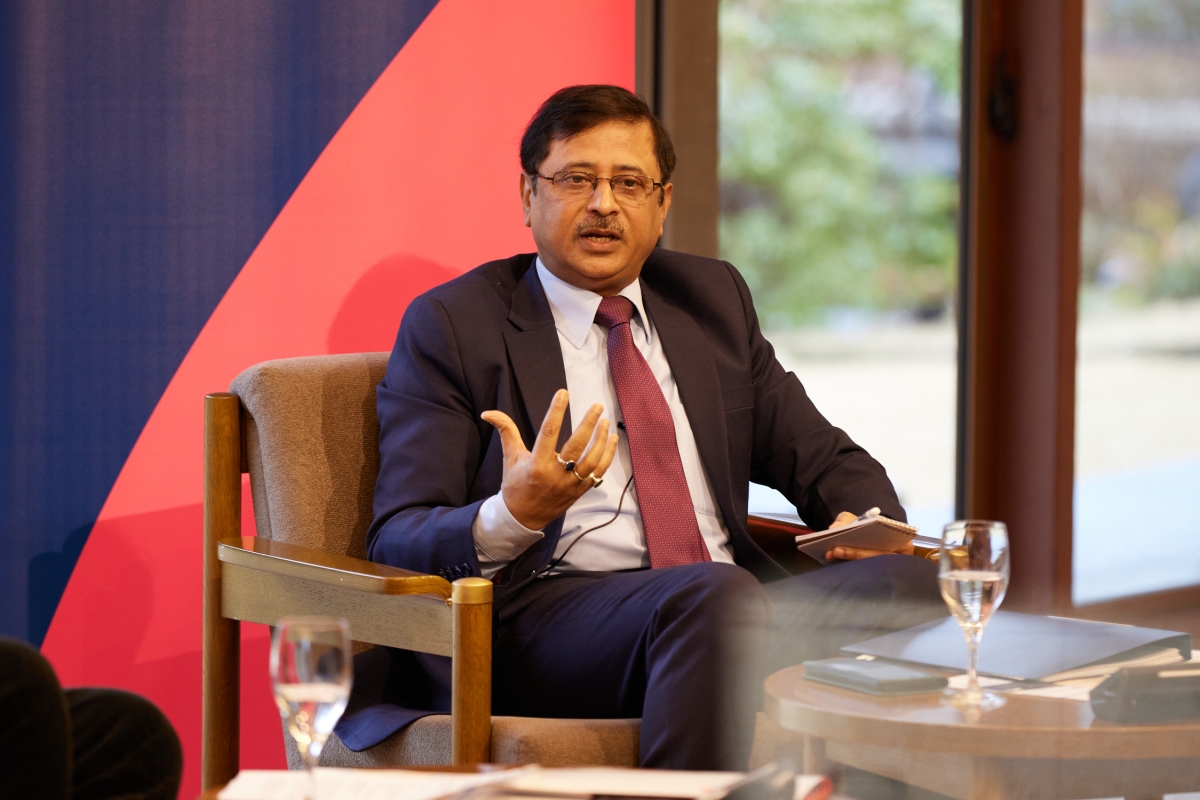 ‘India Japan Forum’ hosted by India and Japan will help build the future of Asia on the foundations of shared traditions of nonviolence and democracy. In this context, the launch of the India-Japan Forum last year, with the participation of eminent personalities from government, Parliament, industry, media, and academia from both countries, marked another important development towards deepening mutual understanding. The India-Japan partnership is shaping the contours of regional peace, stability, and prosperity. It would not be wrong to claim that India and Japan are key to the much-sought international geostrategic stability.

Conversation with the audience

Engaging in conversation with audience, Ambassador Verma made further comments on various topics, including India’s issues-based (as opposed to personality-based) diplomacy with the United States, the role of higher education in India-Japan collaboration, India’s climate change strategy, hydrogen initiatives between Japan and India, the impact of border clashes with China on India’s trust in its neighbor, possibilities of joining TCTPP, Cyber diplomacy, and potential areas of collaboration in blockchain technology.