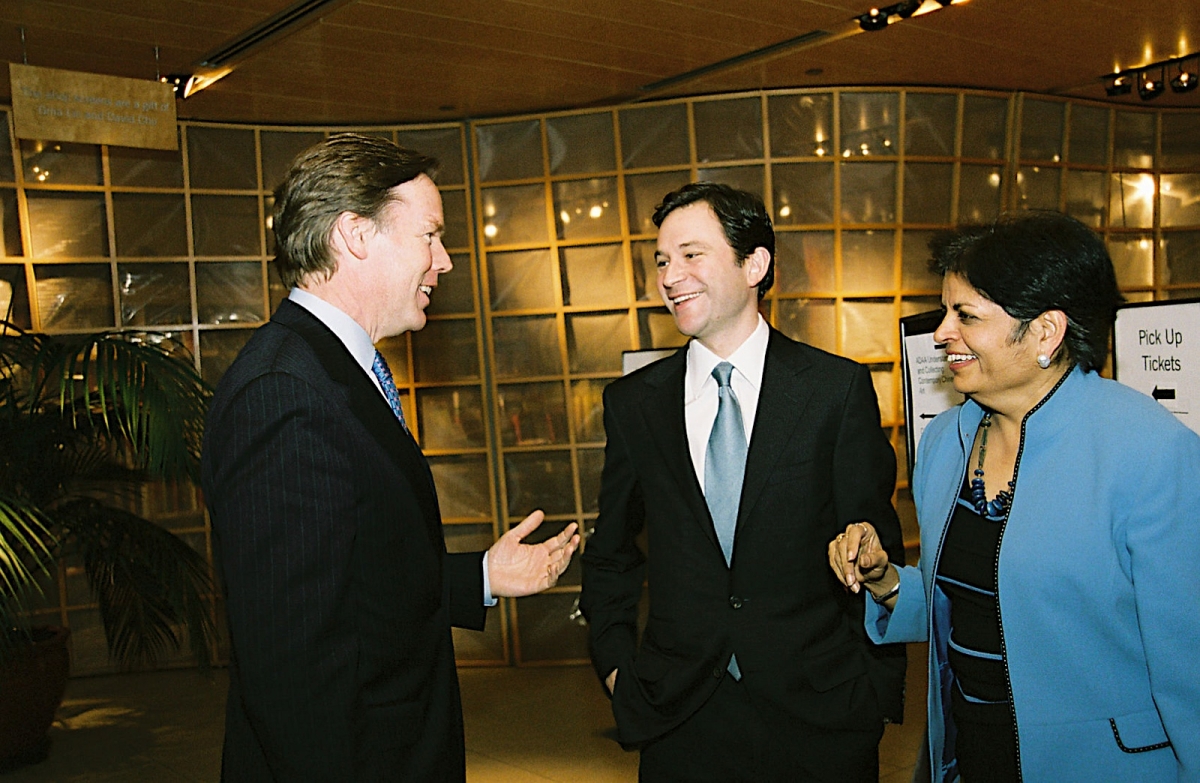 Ambassador R. Nicholas Burns is the Under Secretary of State for Political Affairs, the Department of State’s third ranking official. Prior to his current assignment, Ambassador Burns was the United States Permanent Representative to the North Atlantic Treaty Organization. As Ambassador to NATO, he headed the combined State-Defense Department U.S. Mission to NATO at a time when the Alliance committed to new missions in Iraq, Afghanistan and the global war against terrorism, and accepted seven new members.

Ambassador Burns addressed the Asia Society on US Policy in South Asia on November 27th, and gave this interview to Nermeen Shaikh prior to his speech.

A State Department official today said that Phillip Zelikow, one of Condoleezza Rice's closest advisors on Iraq and the Middle East, plans to resign his post. How might this influence US policy in the Middle East in general, and in Iraq in particular, especially given recent concerns about policies involving the latter?

Well, Phillip Zelikow has been one of Secretary Rice's key advisors, and I might add, a very close friend of mine, and we are very sorry to see that he has submitted his resignation. It's entirely for personal reasons; it has nothing to do with policy. The policy in the Middle East, of course, is made by the President, and I would look for a great deal of continuity in our policy towards Iran and towards Lebanon and the Israel-Palestinian process. As you know, we are reviewing our policy in Iraq, so we'll have to wait and see the decisions that the President makes, but Phil Zelikow is going to be very, very sorely missed, he's added a lot to what we've done. But I don't think it'll have an impact on the direction of our policy.

In an address to the Senate Foreign Relations Committee in September you said that the United States has no higher priority than "facing and overcoming" the threat that Iran presents. Do you still think that's the case, given that North Korea has since carried out nuclear tests?

Well, I think I would say that they're both important, and they're both problematic. In the case of North Korea there's an international consensus that North Korea not maintain a nuclear arsenal, so the whole purpose of the six party talks is to dismantle their nuclear arsenal, in fact that's what the North Koreans have committed to. In the case of Iran, it is potentially more dangerous, because Iran, of course, sees itself as the most important country in the Middle East, it believes it's the most powerful country, and a radical government of the type led by someone like Ahmadinejad in possession of nuclear weapons would be a lethal mix. So, I do think we worry about that, we worry about that as a very serious concern to global security as well as regional security.

More so than North Korea?

Well, I wouldn't compare them as much, I'd say that both of them are serious concerns. Any time you're talking about the proliferation of nuclear weapons, and of the ability to manufacture them, and you add to that unstable or aggressive states, and North Korea and Iran meet both of those definitions, then you've got a terrible problem on your hands. And so I can't think of any two bigger problems right now that the world is facing than those two.

What's the US position now on what might be gained from bilateral engagement with either North Korea or Iran?

You know, we've been talking to the North Koreans from time to time in the context of the six party talks. In fact, our negotiator, Chris Hill, just met with them on the 15th of October, and we don't discount the possibility of future meetings. And so there's no lack of contact there, and we're just all trying, the Japanese, the South Koreans, China, Russia, the US, trying to move the North Koreans back to implementing the agreements that they have made with us.

In the case of Iran, it's a unique relationship. We've been estranged for 27 years, we haven't had any official contact, and we'll have to see if opportunities arise where it would make sense for us to talk to them. We do have contact from time to time, unofficial contact, and it's going to be up to the President and Secretary of State to decide when and if we should be talking to the Iranians, whether it's about Iraq or whether it's about nuclear weapons. And I should say, in the case of nuclear weapons, we did make an offer back on June 1st of this year to negotiate with the Iranians for the first time in three decades. And Secretary Rice said that she would personally be present at those negotiations. The Iranians did not accept our invitation, so if there's any party responsible for the lack of contact between Iran and the United States on the nuclear issue, it's Iran, because we want negotiations with them.

On a related issue, the nuclear question, could you comment on Chinese President Hu Jintao's recent visit to Pakistan? Are the burgeoning military ties between these two countries, between Pakistan and China, a concern for the US, especially given Pakistan's, what shall we say, rather ambivalent position with respect to the war on terrorism?

Well, we're a strong supporter of Pakistan, and we have a very close relationship with the Musharraf government, and we want to support that government because it's playing a central role, for instance, in the fight to keep al Qaeda and the Taliban from crossing the border into Afghanistan. And I think we are still, by far, the largest provider of military assistance to Pakistan. We have made a case to the US Congress that we ought to sell F-16 fighter aircraft to Pakistan. So we are not opposed to Pakistan strengthening its military, or its counter-terrorism capabilities. We, of course, wouldn't want to see any proliferation occur in the future as has happened in the past through the AQ Khan Network.

So the US has no concerns about China developing a military relationship with Pakistan of the order that has just recently been discussed…?

Could you comment on all the recent reports that suggest that Pakistan's military establishment and its intelligence agencies are playing, minimally, a confusing role in the war on terrorism that may be contributing to the deteriorating security situation in Afghanistan?

President Musharraf has assured us that his government is making every effort to try to strike against the terrorist groups that are bent on destroying the Afghan government, and also targeting American soldiers in Afghanistan, and we appreciate what President Musharraf has done. I would say there is no more important partner than Pakistan to us in this global fight against terrorism. Pakistan is ground zero, in the sense you've got Taliban there, you've got al Qaeda, there are other insurgent groups that are both a threat to the Pakistani government as well as to the Afghan government, and we have very close cooperation with them.

To return to North Korea: you just met with UN Secretary General-elect Ban Ki-moon, could you comment on what influence or effect, if any, his selection as UN-SG will have on the potential resolution of the North Korean problem?

Well, we're fortunate to have someone of his expertise and familiarity with the issue as Secretary General of the UN. North Korea is an abiding concern to the Security Council. We're at a critical stage now, we're trying to exert international pressure on the North Koreans to live up to the agreements they've already negotiated. So, I think that Ban Ki-moon will play a large role in this as the Secretary General of the United Nations, and we're going to be fortunate to have both his actions and his energy as well as his knowledge to bring to bear on this critical issue.

Do you think the South Koreans are doing enough to support the US position vis-à-vis North Korea at the moment?

Well, I know that President Bush had good meetings with President Roh in Hanoi last weekend, and that we're satisfied the South Koreans support our strategy. We would have wished the South Koreans had become a full member of the Proliferation Security Initiative, the PSI, because that's one very definite way to try to limit the possibility of proliferation from North Korea on the high seas, for instance, and through ports and airports. So there is more the South Korean government can do.

And what about the Chinese?

Since the North Korean nuclear tests of October 9th, the Chinese have been very helpful to us, and we've worked well together in the Security Council. I was in Beijing two weeks ago, and we found the Chinese to be dedicated to the September '05 Agreement, we think the Chinese have used their influence with the North Koreans to attract them back to the six party talks, so actually we're very pleased with the way we've worked with China over the last month.