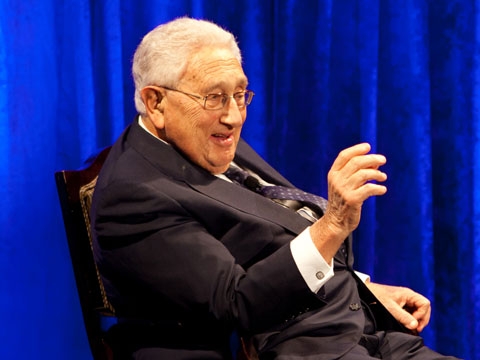 WASHINGTON, June 15, 2011 — The United States and China must "adjust their traditional thinking" and "move toward a sense of community" in order to avoid conflict, Dr. Henry Kissinger told an Asia Society audience Wednesday.

"We are now in an international situation for which there is no precedent in history," the Nobel Peace Prize winner and former Secretary of State said.

"On the one hand there is turmoil in many parts of the world. At the same time, there are a series of problems that can only be dealt with on a global basis. ... And that makes it imperative for the two strongest nations that are existing in the world today to move in a cooperative manner."

Kissinger made his comments during the annual Asia Society Washington Awards Dinner at the Ritz-Carlton in downtown Washington, D.C. The event featured more than 400 dinner guests, including diplomats and dignitaries from 27 countries. Kissinger, who was honored with the Lifetime Achievement Award, appeared on stage in conversation with Orville Schell, preeminent China scholar and Arthur Ross Director of the Asia Society's Center on U.S.-China Relations.

Kissinger, who spearheaded the talks with Zhou Enlai and Mao Zedong in the early 1970s that some credit for China's eventual opening up, released his latest book, On China, last month.

Kissinger's time on stage got off to an amusing start. After an introduction from Chinese Ambassador to the United States Zhang Yesui, new Asia Society Co-Chair Ronnie Chan took the mic and playfully ribbed the guest of honor.

"Forty years ago, Henry, you went to China," Chan said. "Yet after 40 years you still do not speak a word of Chinese. I was so happy to see the eight little children from Yu Ying School. Every one of them speaks Chinese better than you."

Chan continued, "But ... without you they would not be speaking Chinese today."

But it was not all playful banter. Without getting into specifics, Kissinger did address some of the tough policy decisions he was forced to make over the course of his career — decisions that made him one of the most controversial foreign policy advisors in U.S. history.

"For better or worse, I served in a very turbulent time, and amidst profound national divisions," Kissinger said. "So I would like to think that while mistakes were undoubtedly made, that we didn't miss any breakthrough moments, and that we seized some in the Middle East. And we had the good fortune of being able to serve at a moment when a breakthrough to China was possible."

There were also times when the 88-year-old Kissinger flashed his trademark wit. When Schell asked him to sum up On China for the audience, Kissinger said: "If I can sum up 600 pages in one sentence then I missed something."

Kissinger went on to explain that one of the main themes of his book was that "long-range thinking" is necessary from leaders in both China and the United States. They need to go, Kissinger said, from "crisis management to a sense of community."

"I also understand, as a historian and as a practitioner, that this is not what history teaches you," Kissinger added. "History teaches you that this might lead to conflict, so the challenge of our times is to transcend that part of experience and to move towards a sense of community."

"And are you optimistic?" Schell asked.

Shop AsiaStore for On China by Henry Kissinger