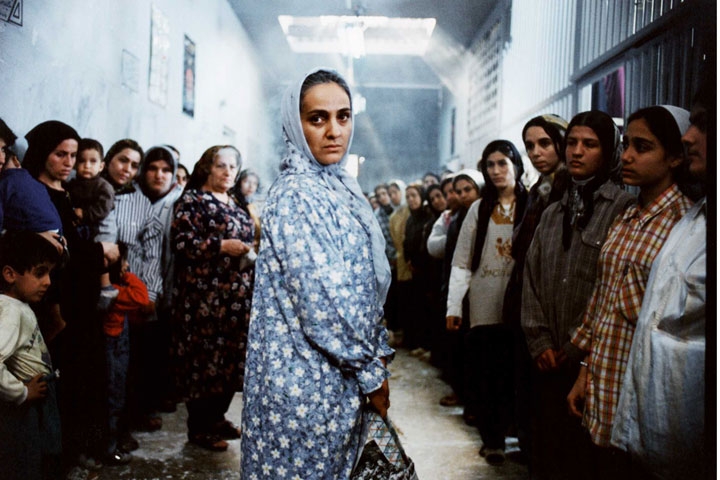 Co-presented with the Global Film Initiative

Focusing on lives of women in Iran, this film series presents portraits of strong women negotiating their space and freedom in a narrow world of strict social conventions.

Tickets for all screenings: $7 members/students/seniors; $11 nonmembers.
Series discount: buy a 3-film series ticket to receive $1 off each film.

Banned in Iran, this taboo-breaking film uses the claustrophobic life of women behind bars as a metaphor for Iranian society since the 1979 Islamic Revolution. Covering a span of almost two decades, the film centers on the relationship between an inmate who is jailed for killing a violent stepfather and a warden who is at once stern and humane. As time goes, we see changes in Iranian society reflected in the microscopic world of one prison. Part of the Global Film Initiative’s Global Lens collection.

Three loosely connected short stories portray women in three stages of life—a young girl who is about to turn nine, the age of womanhood, when she will have to wear the chador and stop playing with boys; a young woman who enters a cycling race against the objections of all the men in her clan; an elderly woman who takes the biggest shopping trip in her life to buy all she has ever wanted. Stunningly shot on the free-trade island of Kish in the Persian Gulf, the film is written by internationally acclaimed filmmaker Mohsen Makhmalbaf, husband of the filmmaker.

"Wonderful stories, great pieces of cinema and, above all, warmly human works."—Jamie Russell, BBC
“[A] stunner of a film."—Stephen Holden, New York Times

A young widowed mother takes a defiant stand and runs her late husband’s restaurant against the threat of men in her community to shut down her business. Hiding in the kitchen so that her customers do not see her, this woman struggles for independence and against a rigid society. Taking place on the Iran-Turkey border, the film reveals an unusual landscape where Iranian and Western societies converge. Director Partovi also wrote The Circle (2000), which won Venice International Film Festival’s Golden Lion award. Part of the  Global Film Initiative’s Global Lens collection.

“A memorable portrait of one woman in Iran—and, by extension, of the bleak sorrows of millions of women's lives.”—Louise Kennedy, Boston Globe