The Mongols, Tibetans, Manchus, and Naxi 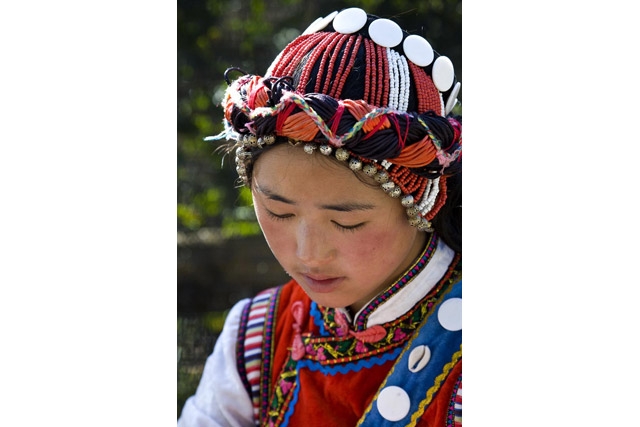 An essay on some of China's 56 ethnic minority groups. This essay provides a backdrop for understanding that China, like many places in the world, faces challenges about how to reconcile national borders with ethnic ones. The arguments surrounding these debates are very complex, with groups invoking history in different ways to legitimize their opposing stances.

China is a country of immense diversity in terrain, climate, and especially people. There are 56 officially recognized ethnic groups. The largest is the Han Chinese, numbering 900 million, who reside in every region of the country. The smallest group is the Hezhen, living in the far northeast, with fewer than 2,000 people. This essay introduces four groups-Mongols, Tibetans, the Manchus, and the Naxi--whose writings are in the Beijing National Library. It is important to note that China, like many places in the world, faces challenges about how to reconcile national borders with ethnic ones. Precisely when and how regions such as Mongolia and Tibet came to be part of China are points that are disputed by groups both within and outside of China. The arguments surrounding these debates are very complex, with groups invoking history in different ways to legitimize their opposing stances.

Mongols
Western images of Mongols often depict horse-riding nomads, living in yurts, or tents, and following their herds of sheep, horses, and cattle over the grassy plains of central Asia. Like the American cowboy, Mongols embody the pastoral image of free-spirited people living in harmony with their animals and the environment. There is a grain of truth to this stereotype. Some Mongol people make their living tending herds of animals and moving with the seasons, a practice known as nomadic pastoralism. However, this image does not capture the diversity found among Mongol people. There are sedentary farmers raising corn, wheat, oats, chickens, and pigs. Still other Mongol people combine aspects of nomadic pastoralism with sedentary agriculture. One family may divide the tasks among different members, with some moving to the steppes and tending the family herds, while others stay on the farm to raise crops. There are also Mongol doctors, lawyers, politicians, and professors. Some Mongols live in large cities, trading in stocks and bonds on international markets and designing Web pages. In short Mongols are as varied as any peoples in the world today.

There are three primary means of determining Mongol identity. They are history, language (written and spoken), and religion. Starting in 1206 C.E., led by the great Chingis Khan, Mongol armies spread out over Asia. By 1275, under Chinggis's grandson Khubilai Khan, the Mongols had established the largest land-based empire in the history of the world, stretching from Korea to southern China, through central Asia and what is now Russia. Mongol rule was established in Persia (today Iran), and, for a brief time, Mongol armies occupied parts of Eastern Europe, near what is now Poland and Hungary.

As this empire expanded from its core area in Mongolia, it stationed armies in various places throughout Asia. The descendants of those forces now reside as far south as Yunnan (in southwestern China), as far north as Lake Baikal in Russia (the Buriats), as far west as southwestern Russia (the Kalmyks), Afghanistan (the Moghols) and Xinjiang (the Oirats), and of course, in the Inner Mongolian Autonomous Region in China and Mongolia. Though these groups live thousands of miles apart, there is recognition of a common heritage going back to the thirteenth century. A common language also unites Mongols. All speak Mongolian, with minor linguistic differences, and use the same unique script. Written from top to bottom, left to right, the script was adapted in the thirteenth century from the Uighur script, when the expanding Mongol Empire needed a means to communicate. The People's Republic of Mongolia, what is now known as Mongolia, used the Cyrillic alphabet to write the Mongolian language while the country was under the influence of the Soviet Union. In recent times, however, attempts have been made to reintroduce the traditional script.

Religion is another unifying force for Mongol society. Shortly after conquering most of Asia in the twelfth and thirteenth centuries, Mongols were introduced to Buddhism, particularly Tibetan Buddhism. Monasteries were established to serve the religious needs of their communities, and to this day, Buddhist monasteries in Mongol communities continue to teach the holy scriptures by means of the Mongol script. For the 3.5 million Mongols living in China today, there is much in their culture with which to identify. History, language, and religion interact with other cultural practices, such as music and art, to form a rich tapestry.

Tibetans
Like Mongolia, Tibet was the center of a vast empire. Beginning in the seventh century, Tibetan armies moved north, east, and west from the area around the Yalu River in the region near present-day Lhasa. Within a few decades, they had conquered much of central Asia, including the important routes through Xinjiang used by China to trade with Western neighbors. In the eighth century the Tibetan Empire was the most feared political power in Asia. For a short period in 755, Tibetans even captured Chang'an, then the capital of China, chasing the Chinese emperor and his court from the city. Internal disputes eventually divided the Tibetan Empire, and the court's authority gave way to local leaders. However, there are lasting legacies of this imperial period. One is language. In modern China there are three dialect groups, all closely related to one another and descended from the language of the empire's armies. The first is Central Tibetan, spoken around Lhasa, in an area now called the Tibetan Autonomous Region (TAR). The second is Khams, spoken east of the TAR in Sichuan, Yunnan, and in some parts of Qinghai. The third dialect group is Amdo, spoken north of the TAR, in Qinghai, Sichuan, and Gansu provinces. Tibetan languages are also spoken in Nepal, Bhutan, and India. All of these linguistic varieties use the same written language, which is based on an alphabet invented in Tibet during the reign of Srong bstan Sgam po (627-650).

Another lasting legacy of imperial Tibet is Buddhism. The first Tibetan emperors invited Buddhist monks from India and China to teach the religion to courtiers and aristocrats. The emperors also sent learned men to India and China to gather Buddhist scriptures and translate them into Tibetan. The teachings of Buddhism took firm root, quickly permeating Tibetan society. Buddhism came to flourish in Tibet as it had nowhere else. One difference in the Buddhism of Tibet is the importance of the lama, or teacher, with whose assistance the disciple will reach spiritual enlightenment. Therefore, Tibetan Buddhism is sometimes referred to as Lamaism.

Monasteries play a key role in Tibetan society. As centers of religion, they not only minister to the spiritual needs of their lay communities but also preserve and propagate religious and scholarly traditions. In the case of Tibet, with a written history of over thirteen thousand years and thousands of religious texts, the scholarly tradition is of great significance.

In recent times Tibet's people and their culture have gained increasing attention as they wrestle with the problem of finding a political space in the rapidly changing modern world. There is concern over whether the nearly four million Tibetans living in China today will be able to hold onto their heritage and allow it to proliferate in the future.

The Manchus
The Manchus offer a cautionary example of the importance of language as a means of preserving a people's heritage. While around 4.2 million Manchus live in China today, it's estimated that only around 50 individuals still speak the language. The vast majority speak and write Chinese. With the near extinction of the Manchu language, a great deal of culture has been lost.

The Manchus have a proud history. In 1644 they overran the Ming dynasty, which had ruled China for nearly three hundred years. Manchu armies then gained control of present-day Mongolia, Xinjiang, and Tibet. The Manchus established a dynasty, called the Qing, which ruled much like a Chinese dynasty, with an extensive military and civilian bureaucracy. However, their empire included lands that no Chinese dynasty had ever controlled. By the eighteenth century, the Qing dynasty was the largest, richest, and most powerful empire in Asia and, possibly, the world.

From the beginning there were signs that the relatively small group of Manchus who were now rulers of China would be greatly changed by the experience of governing such a vast land. Originally, they looked to shamans-individuals who had a special relationship with the natural world-for religious guidance. Through trances, shamans communed with spirits who provided them with powers to heal the sick, rid an area of evil spirits, or see the future. Over time this practice largely gave way to Buddhism, Daoism, and the other religious traditions. Similarly, Manchu language gradually lost its place. At the beginning of the Qing dynasty, Manchu was used for all written documents at court. The writing system was modified from the Mongolian alphabet to fit the needs of the Manchu language. Many of the earliest scribes for the Manchu rulers were, in fact, Mongolians hired for their ability to write.

Over time it became court policy that all documents should be written in both Manchu and Chinese. Eventually fewer Manchu learned to write their own language. The emperor Qianlong, who ruled from 1736 to 1796, repeatedly ordered his courtiers to learn Manchu, suggesting that many were using Chinese exclusively. By the dynasty's end, in 1911, even the emperor could not read or write the Manchu language and probably did not speak it either.

The Naxi
There are fewer than 300,000 Naxi people, most living in Yunnan province in China's southwest. Unlike the Mongols, Tibetans, and Manchus, the Naxi were never a political force of international importance. From the eleventh to thirteenth centuries, they were a regionally dominant people. However, when the Mongol armies arrived in 1253, the Naxi were quick to submit to their authority. From that time onward, they ruled southwest China on behalf of whatever imperial dynasty was in power in Beijing, from the Yuan dynasty, through the Ming and Qing dynasties.

Today the Naxi mostly occupy high mountain valleys and the foothills to the Himalayan plateau. Although it is a tropical region, the altitude makes the seasons generally mild. Most Naxi are farmers, growing grain and vegetables in the valleys. Some tend livestock, such as yaks, goats, and sheep, in the mountain grasslands. The most important urban center of Naxi culture is Lijiang, a mid-sized town that is home to businesspeople, doctors, and artists. The Naxi language is distantly related to the Tibetan language. Naxi religious leaders, called Dongba, have long used a unique form of picture writing to record the stories and myths that are central to their religious teachings. This "script" is known as Dongba writing. A system of Roman letters has recently been developed for writing the Naxi language, providing a more efficient method. However, the Dongba script continues to be a powerful symbol of Naxi ethnicity. (See the Annals of Creation in Dongba Script at the beginning of this section.)