The Science of Pickling and Fermentations

Explore how pickling and fermentations are used in popular Asian dishes

The terms pickling and fermenting are often used interchangeably, but they are quite different. The methods do have some overlap even though they are independent of each other. Regardless, they are both interesting culinary techniques, and Asian cuisine offers the perfect backdrop to learn how they are used in cooking many unique ways.

Pickling is the process of using an acidic brine to preserve a food. Acidic brines are made with either salty water, sugar water, lemon juice, or vinegar. Either substance (or sometimes a combination of them) is poured over vegetables, fruit, meat or fish which are then placed in a tight jar for a few days. This process changes the taste of the vegetables, making them more sour. Pickling dates back thousands of years, with the first record of pickled cucumbers existing in ancient India.

Fermentation is also quite simple and dates back in China as early as 7000 BCE. A fermented food has been preserved and transformed by bacteria. Usually, that means that the sugars and carbohydrates in the food have been eaten by the good bacteria. The bacteria then convert that sugar into other substances, like acids, carbon dioxide, and alcohol. Those substances, in term, preserve the food (and add to its flavor). Fermentation encourages probiotics to thrive and is thus good for the human digestive system. Eating fermented foods is thought to be part of a healthy diet.

Fermentation is also used in baking many types of breads all around the world. With bread, this refers to the process where yeast converts sugar to carbon dioxide and alcohol in the absence of oxygen, causing dough to rise.

How are pickling and fermentation similar?

While both pickling and fermenting produce different results, there are some areas of overlap that can easily spark some confusion. Here’s what you need to remember: Pickling involves soaking foods in an acidic liquid to achieve a sour flavor; when foods are fermented, the sour flavor is a result of a chemical reaction between a food’s sugars and naturally present bacteria — no added acid required.

Here are some discussion questions you can enjoy with your child while trying out the recipes below. Don't forget to check out the activities featured in our STEAM Activity Chart to extend your child's understanding of pickling and fermentations. 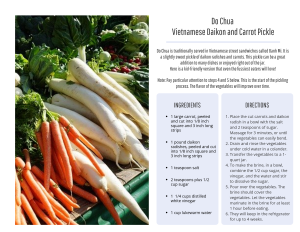 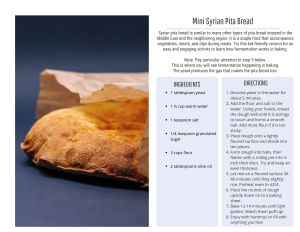 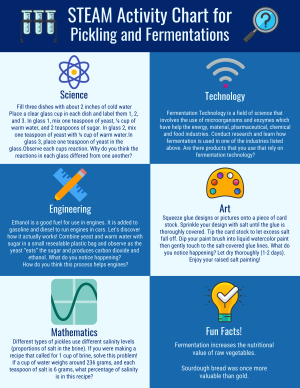