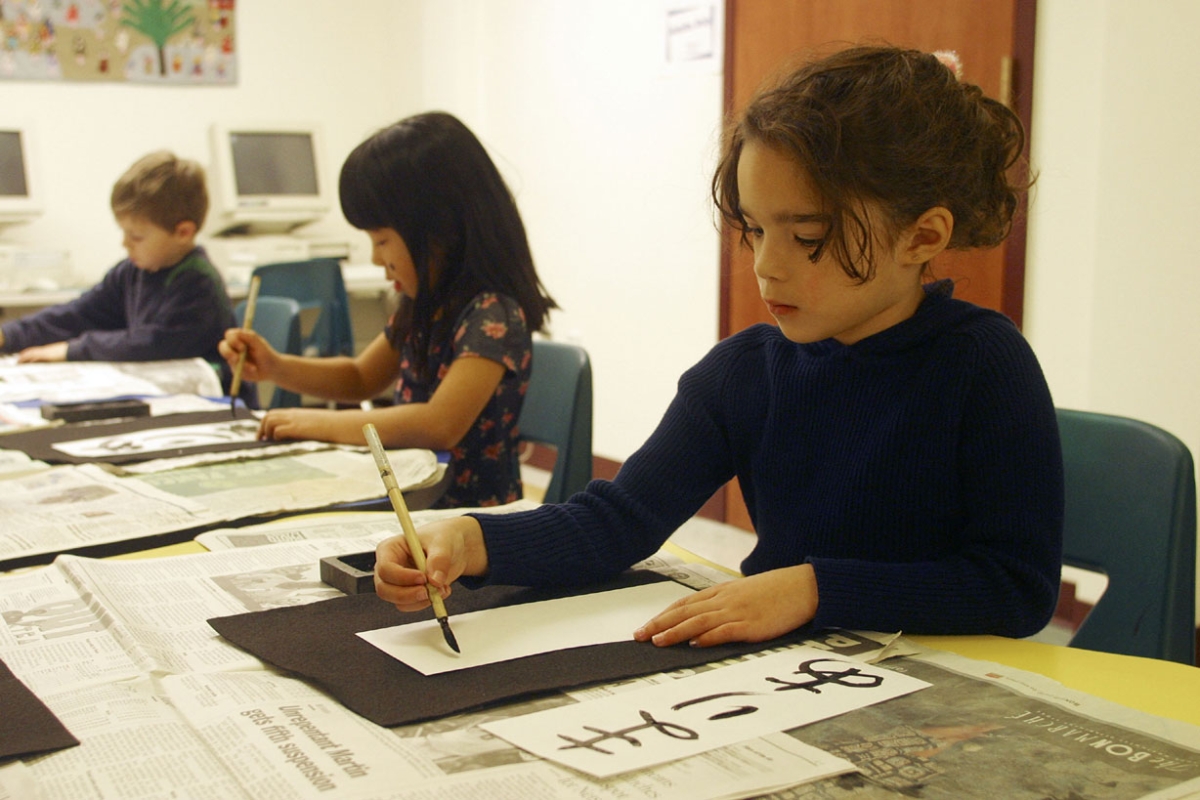 This Seattle school has been so successful, that it has catalyzed the creation of ten other international elementary schools in the district.

John Stanford International School (JSIS) is a kindergarten through fifth grade public, bilingual immersion school in Seattle, Washington, with approximately 400 students; 41 percent of the student body is white, 29 percent Hispanic, 22 percent Asian or Pacific Islander, and eight percent other. Opened in the fall of 2000, JSIS students spend half their day studying math, science, culture and literacy in their chosen world language, either Japanese or Spanish, while the other half of the day is spent learning reading, writing and social studies in English. International content appears across all curricular areas. A local arts organization provides artists in residence to teach students the language of world dance, music and visual art. The fifth grade has a virtual partnership with a school in Tanzania. The John Stanford International School lives up to its aim to, "create a culturally diverse community of lifelong learners who demonstrate advanced skills in communication, international language, and technology, and whose performance exemplifies superior academic standards."

JSIS's immersion program emphasizes attaining social and academic fluency in at least one world language. Immersion class teachers, or their assistants, must be native speakers. The concepts learned in core courses are reinforced in both languages. JSIS serves as one of Seattle's centers for new immigrant students, and offers English as a Second Language courses for children and after-school courses for their parents. The school has demonstrable success both in language acquisition and academic achievement.

Partnerships with local international businesses, as well as curriculum support from the University of Washington have helped the development of the school. A new partnership has also been established with a small school in Puerta Vallarta, Mexico; JSIS students learn about the children of the city's garbage pickers, have helped to raise money for the school and have developed an ongoing relationship with it.

Winning the Goldman Sachs Prize for Excellence in International Education in 2003 after only being open as a school for three years, gave the school's staff, parents, and students an increased sense of pride and motivated them to strive to learn more and increase their own expectations so they could live up to their new role as a model in international education. The prize award was used to purchase library books to expand the school's international collection. Students are now able to check out books from the library written in English, Spanish or Japanese. New software and keyboards for the Japanese and Spanish immersion programs allows students to increase their fluency in reading and writing in Japanese and Spanish. Since winning The Goldman Sachs Foundation Prize for Excellence in International Education, the school has received a number of awards and distinctions. In fall, 2005, John Stanford International School was named the Best of the Best elementary school in the nation and also received the Intel/Scholastic Schools of Distinction Award. The school was featured in a Time Magazine cover story on "How to Build a Student for the 21st Century." (see left column)

Perhaps the largest impact for the local community is that John Stanford International has inspired a network of ten new international schools to be launched in Seattle. Under the new plan, eight more schools (in addition to the existing John Stanford School and Hamilton International Middle School) would be established over the course of the next three to five years. The new schools would have a dual-language immersion format and an international focus.

When asked to advise others interested in trying to engage K-12 students in learning about the world, Principal Karen Kodama says, "Take each content area and think about how you can make it more global/international. For instance in reading use fairy tales - read a book from Africa, Asia, and South America - then compare and contrast the plot, setting, characters etc. Use a map and see where each story is from, this brings in geography. In high school, look at world health issues, international business and how different countries/cultures do business. Think outside the "box."