Japan: Voices from the A-Bomb Blast 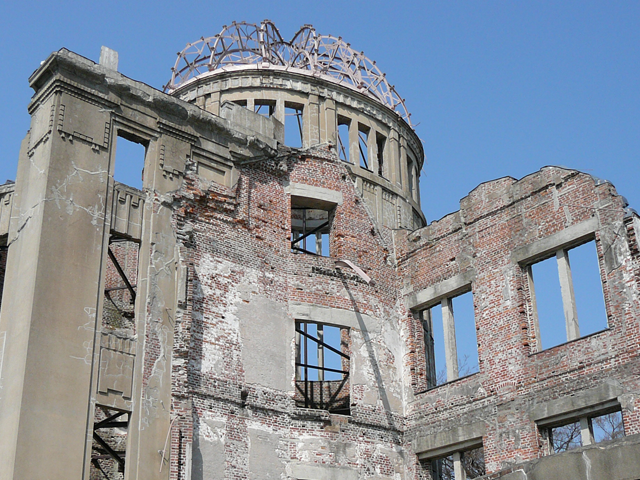 Little Boy and Fat Man took the entire world by surprise. The scale of destruction and suffering was so shocking that no nuclear weapons have been used since. They brought World War II to a swift end, but increased the stakes of war. In Japan, Little Boy and Fat Man more than ended Japan’s ambitions for an empire: they led the Japanese to renounce military action and military forces entirely. Today, however, shifting powers in Asia as well as the general proliferation of nuclear weapons are testing Japan’s commitment to remaining free of nuclear weapons.

“This is the greatest thing in history.”
—U.S. President Harry Truman upon learning of the nuclear bombing of Hiroshima

The United States developed Little Boy and Fat Man in secret during World War II. Amid fears that Germany was investigating military uses for nuclear fission, President Franklin D. Roosevelt initiated research even before the United States officially entered World War II. This effort grew into “The Manhattan Project,” a top-secret program that was led by the U.S. Army Corps of Engineers, involved the efforts of 130,000 people, and cost over $2 billion dollars (more than $20 billion in today’s equivalent). The result was three nuclear bombs. The first was tested in the deserts of New Mexico on July 16th, 1945, a little more than two months after the victory of the United States and Allied forces in Europe.

President Harry Truman ordered that the other two, Little Boy and Fat Man, be dropped on Japan to bring an abrupt end to the Pacific War. Truman had been president for only a few months after Roosevelt’s death in April 1945. Truman justified the use of nuclear weapons on the grounds that they spared more lives than they cost and saved the United States military casualties in a firebombing campaign and ground assault on Japan.

"Japan was at the moment seeking some way to surrender with minimum loss of 'face.' It wasn't necessary to hit them with that awful thing."
—U.S. General Dwight D. Eisenhower

However, many of Truman’s contemporaries as well as historians claim that Japan was close to surrender anyway and there was no need for targeting civilians with such terrible weapons. Truman’s writing at the time suggests that he saw the attacks in part as revenge for the Japanese attack on Pearl Harbor.  Historians have also speculated that using the bombs would justify the enormous cost of the Manhattan Project and avoid embarrassing investigations. Lastly, Truman may have been hoping that the show of force would strengthen the U.S. position in post-war negotiations with the Soviet Union.

"My God, what have we done?"
—Enola Gay co-pilot, Robert Lewis

Japan’s devastating defeat in World War II led Japan to renounce war. Its Constitution, written in 1946 under American supervision, pledges that "land, sea, and air forces, as well as other war potential, will never be maintained". Japan is now dependent upon the United States for military protection.

While no nuclear weapons have been used since, much more powerful nuclear bombs as well as long-range missile systems are at the ready worldwide. The Soviet Union, Great Britain, France, and China all built or acquired nuclear weapons during the Cold War.  Israel has never confirmed that it possesses nuclear weapons, but it is widely believed to have them.

Today, the world is seeing a “second nuclear age” marked by a growing membership into the nuclear club. India and Pakistan joined in 1998. In October, 2006 Japan’s hostile neighbor, North Korea, said it successfully detonated its first test weapon. Iran is also pursuing a nuclear program and even more countries could follow.

So how does Japan’s post-war generation view nuclear technology, the attacks on Japan, and the future of nuclear weapons? Since World War II, Japan has enthusiastically developed nuclear technology for power. Poor in raw energy materials such as coal, oil, or natural gas, Japan has built the world’s third largest nuclear power capacity, after the United States and France.

But also during this time, Hiroshima residents rebuilt their city as a City of Peace. Successive mayors of Hiroshima have sent official letters of protest after every nuclear test since World War II, and Hiroshima has become a popular site for international conferences on peace and social issues. Its Peace Memorial Park houses the "A-Bomb Dome," one of the few remaining buildings that was bombed, educational museums, and memorials dedicated to the victims of the bombing. Each year, approximately 10 million origami paper cranes are dedicated in its Children’s Peace Park as a symbol of peace and friendship. Nagasaki also has an Atomic Bomb Museum dedicated to teaching about the nuclear attack.

Today Hiroshima and Nagasaki are thriving modern cities that are looking forward, even as they are rooted in the nuclear attacks of August 1945. People who live in Hiroshima say that the A-Bomb Dome seems to get smaller every year, as modern buildings rise from Hiroshima's ashes and modern concerns eclipse postwar resolutions. Once the World War II generation dies away, will the memory of what was suffered be lost?

In July of 2006, Japan’s neighbor North Korea, hostile since the brutal Japanese occupation of 1910-45, conducted a missile test in the Sea of Japan. A few months later, North Korea announced it had successfully detonated its first nuclear weapon, leaving the Japanese to wonder whether North Korea might soon be capable of attacking Japan with a nuclear missile. The Japanese media and public reacted with alarm: should Japan abandon its commitment to remain free of nuclear weapons? Taro Aso, the Japanese foreign minister, said what had previously been unmentionable: that Japan had the know-how, if not the intention, to develop nuclear weapons for defensive purposes.

What would it mean if the only country to experience the horrors of a nuclear attack lost sight of the “Atom Bomb Dome” and embraced nuclear weapons? As the Peace Memorial Museum in Hiroshima states:

"We must reflect on war and the causes of war, not just nuclear weapons. We must learn the lessons of history, that we may learn to identify and avoid the paths that lead to war."