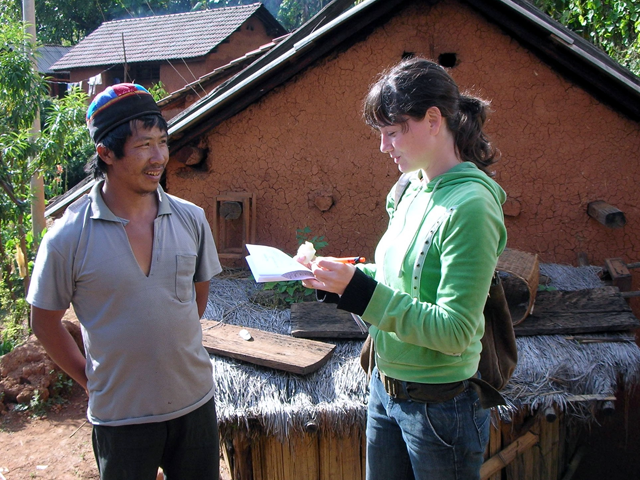 Adina Matisoff has studied abroad at Shanghai's Fudan University and has investigated the treatment of migrant workers in Shanghai's housing policy. As a freelance researcher and writer, Matisoff has authored articles on China's rural countryside and cross-cultural exchange. In 2005-6 she was a Fulbright scholar in China, researching non-governmental participation in rural China's social development.

Your interest in Asia began with a movie, Beyond Rangoon, about a young American who visits Burma. What about the movie appealed to you?

I was in fifth or sixth grade and I just remember being enthralled. I think it was the first time I thought about Asia as a modern place where people were living with their own unique social and political problems.

You first went to China as a visiting student attending Shanghai's Fudan University. What was your initial impression of China?


Traveling on one of the super highways at night, with all the Technicolor florescent lights and futuristic buildings in Pudong streaming by my window, reminded me of The Jetsons. There was an older, more endearing side as well, though, like the little alley by my dormitory where I would go to get fresh steamed buns and fruit from the same open-market sellers every day.

How did you become interested in the lives of China's migrant workers?

Actually, I became interested in all the construction I saw going on around me. The skyline was dotted with cranes, and expensive luxury real estate seemed to be all the rage in the center of the city. At the same time, I would look out my dorm window at migrant workers crouching on the street, waiting for work, and think about how it just didn't seem proportionate. So I did a field research project on the unequal treatment of migrants in the city's housing regulations and market.

In Shanghai, you came to know two sixteen-year-old migrant workers whose experiences in the city were very different from one another. How so?

During my interviews with migrants for my research project, I spoke with two teenagers trying to make it working in the service industry. One worked in a hair salon and the other in a convenience store. Both found work through connections in their home province alongside others teenagers their age, and they both had to work twelve hour days, six days a week.

One was having a great time living in the city: it was an adventure for him. He and his coworkers would goof around in the salon and have a good time together. The girl working in the convenience store had the companionship of a few other girls like her, but their environment was much more subdued and quiet. It seemed to me that both of them were so isolated and insulated from anything going on outside of where they worked.

What were the challenges facing the migrants you came to know?

From the migrant workers I talked to, I think being a migrant worker can be very lonely and isolating, and they are particularly vulnerable to being taken advantage of because they do not always know the correct procedures in the cities.

More recently, you spent time in rural areas of Yunnan, in southwest China. Have you observed similarities between the lives of teens in rural China and their counterparts in the United States?

I was in a mountain village conducting interviews about a micro-credit loan project to help poor farmers buy livestock, and the village was having a movie night at the community center. All of the teenagers stood in the back, on the balcony above. They stood in clusters of girls and guys, whispering with their friends and flirting with whoever their crush was. Put those kids in an American environment and they would be just like American kids.

What strikes you as the biggest difference between those teens and their American counterparts?

The level of poverty. In some places they had only gotten electricity the year before and clean, running water was a problem in many places.

In Yunnan, you encountered a Naxi village that was adapting to the rapid changes taking place in China.Â How were they doing this?

I visited one Naxi village in northwest Yunnan that I felt was very empowered considering their situation. The area they live in suffered irreversible environmental damage because of a government dam project many years ago that forced the people from their traditional means of livelihoodâ€”farming and fishing. Now, in order to remain in their home communities instead of seeking work in the cities, they are finding new ways to live off the land. Different communities around the lake are self-organizing horse riding businesses completely owned and operated by the communities for tourists coming from a nearby travel destination. The people I talked to were not sure if this was going to be a lasting solution to their problems, but they are pro-active about keeping their way of life.

You say that visiting a Chinese rural village gives one a new perspective on food. How so?

Not only do they eat different animals, but they also eat different parts of the animal. I had never eaten pigeon before I spent time in rural areas, of course. It tasted just like chicken but was a much darker color. I had also never eaten pig's brain before. It worked both ways though; I asked some people there if they liked chocolate and they didn't even know what it was. It made me think about what life would be like if we weren't all addicted to refined sugar!

Even in rural China, you found that many people were acquainted with global culture. Where do they get this exposure? Do they have computers?

At this point, most homes, even in the poorest of areas have a TV In some areas of Yunnan, although they do not have channels broadcast in their own ethnic language, they can get state-run television in the standard language, Mandarin, in Tibetan, and in Arabic because of their proximity to Tibet and Xinjiang, respectively. There are very few computers, mostly in county-level and above government offices, the homes of government officials or Internet cafes in the county center.

You have described China in general as a challenging place for you, yet you still feel drawn to it. Why?

In China, daily tasks and interactions require more thought. Sometimes figuring out what you want to eat can take longer than eating it and I have stopped assuming that I know what would be a logical procedure for paying a phone bill. I also think that it can be harder to make good friends because, although people are very friendly and generous, they are also relatively reserved with their emotions. When I make a breakthrough in understanding how things get done or connect really well with somebody, I feel like I have accomplished something that I never could have done if I stayed in the U.S.

When you are spending time in China, is there anything you miss about the United States?