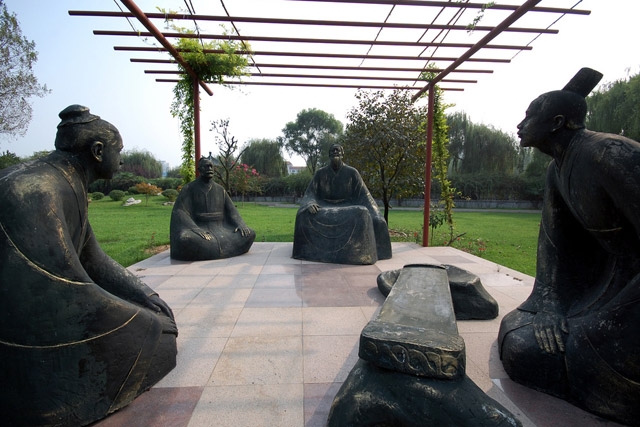 The Research Institution of Confucianism in China. (kanegen/flickr)

The Research Institution of Confucianism in China. (kanegen/flickr)

Confucianism is often characterized as a system of social and ethical philosophy rather than a religion. In fact, Confucianism built on an ancient religious foundation to establish the social values, institutions, and transcendent ideals of traditional Chinese society. It was what sociologist Robert Bellah called a "civil religion," (1) the sense of religious identity and common moral understanding at the foundation of a society's central institutions. It is also what a Chinese sociologist called a "diffused religion"; (3) its institutions were not a separate church, but those of society, family, school, and state; its priests were not separate liturgical specialists, but parents, teachers, and officials. Confucianism was part of the Chinese social fabric and way of life; to Confucians, everyday life was the arena of religion.

The founder of Confucianism, Master Kong (Confucius, 551-479 B.C.E.) did not intend to found a new religion, but to interpret and revive the unnamed religion of the Zhou dynasty, under which many people thought the ancient system of religious rule was bankrupt; why couldn't the gods prevent the social upheavals? The burning issue of the day was: If it is not the ancestral and nature spirits, what then is the basis of a stable, unified, and enduring social order? The dominant view of the day, espoused by Realists and Legalists, was that strict law and statecraft were the bases of sound policy. Confucius, however, believed that the basis lay in Zhou religion, in its rituals (li). He interpreted these not as sacrifices asking for the blessings of the gods, but as ceremonies performed by human agents and embodying the civilized and cultured patterns of behavior developed through generations of human wisdom. They embodied, for him, the ethical core of Chinese society. Moreover, Confucius applied the term "ritual" to actions beyond the formal sacrifices and religious ceremonies to include social rituals: courtesies and accepted standards of behavior-- what we today call social mores. He saw these time-honored and traditional rituals as the basis of human civilization, and he felt that only a civilized society could have a stable, unified, and enduring social order.

Thus one side of Confucianism was the affirmation of accepted values and norms of behavior in primary social institutions and basic human relationships. All human relationships involved a set of defined roles and mutual obligations; each participant should understand and conformto his/her proper role. Starting from individual and family, people acting rightly could reform and perfect the society. The blueprint of this process was described in "The Great Learning," a section of the Classic of Rituals:

Confucius' ethical vision ran against the grain of the legalistic mind set of his day. Only under the Han Emperor Wu (r. 140-87 B.C.E.) did Confucianism become accepted as state ideology and orthodoxy. From that time on the imperial state promoted Confucian values to maintain law, order, and the status quo. In late traditional China, emperors sought to establish village lectures on Confucian moral precepts and to give civic awards to filial sons and chaste wives. The imperial family and other notables sponsored the publication of morality books that encouraged the practice of Confucian values: respect for parents,loyalty to government, and keeping to one's place in society—farmers should remain farmers, and practice the ethics of farming. This side of Confucianism was conservative, and served to bolster established institutions and long-standing social divisions.

There was, however, another side to Confucianism. Confucius not only stressed social rituals (li), but also humaneness (ren). Ren, sometimes translated love or kindness, is not any one virtue, but the source of all virtues. The Chinese character literally represents the relationship between "two persons," or co-humanity—the potential to live together humanely rather than scrapping like birds or beasts. Ren keeps ritual forms from becoming hollow; a ritual performed with ren has not only form, but ethical content; it nurtures the inner character of the person, furthers his/her ethical maturation. Thus if the "outer"side of Confucianism was conformity and acceptance of social roles, the "inner" side was cultivation of conscience and character. Cultivation involved broad education and reflection on one's actions. It was a lifetime commitment to character building carving and polishing the stone of one's character until it was a lustrous gem. Master Kong described his own lifetime:

At fifteen, I set my heart on learning. At thirty, I was firmly established. At forty, I had no more doubts. At fifty, I knew the will of heaven. At sixty, I was ready to listen to it. At seventy, I could follow my heart's desire without transgressing what was right. Analects, 2:4

The inner pole of Confucianism was reformist, idealistic, and spiritual. It generated a high ideal for family interaction: members were to treat each other with love, respect, and consideration for the needs of all. It prescribed a lofty ideal for the state: the ruler was to be a father to his people and look after their basic needs. It required officials to criticize their rulers and refuse to serve the corrupt. This inner and idealist wing spawned a Confucian reformation known in the West as Neo-Confucianism. The movement produced reformers, philanthropists, dedicated teachers and officials, and social philosophers from the eleventh through the nineteenth centuries.

The idealist wing of Confucianism had a religious character. Its ideals were transcendent, not in the sense that they were other worldly (the Confucians were not interested in a far-off heavenly realm), but in the sense of the transcendent ideal—perfection. On the one hand, Confucian values are so closely linked with everyday life that they sometimes seem trivial. Everyday life is so familiar that we do not take its moral content seriously. We are each a friend to someone, or aparent, or certainly the child of a parent. On the other hand, Confucians remind us that the familiar ideals of friendship, parenthood, and filiality are far from trivial; in real life we only rarely attain these ideals. We all too often just go through the motions, too preoccupied to give our full attention to the relationship. If we consistently and wholeheartedly realized our potential to be the very best friend, parent, son, or daughter humanly possible, we would establish a level of caring, of moral excellence,that would approach the utopian. This is Confucian transcendence: to take the actions of everyday life seriously as the arena of moral and spiritual fulfillment.

The outer and inner aspects of Confucianism—its conforming and reforming sides—were in tension throughout Chinese history. Moreover, the tensions between social and political realities and the high-minded moral ideals of the Confucians were an ongoing source of concern for the leaders of this tradition. The dangers of moral sterility and hypocrisy were always present. Confucianism, they knew well, served both as a conservative state orthodoxy and a stimulus for reform. Great Confucians, like religious leaders everywhere, sought periodically to revive and renew the moral, intellectual, and spiritual vigor of the tradition. Until the 1890s, serious-minded Chinese saw Confucianism, despite its failures to realize its ideal society, as the source of hope for China and the core of what it meant to be Chinese.

Although since the revolution, the public ideology of the People's Republic has abandoned Confucian teachings, one can say that there is a continuity of form: like Confucianism before it, Maoism teaches a commitment to transforming the world by applying the lessons of autopian ideology to the actions and institutions of everyday life. This is not to claim that Mao was a "closet Confucian," but to emphasize that the Confucian way was virtually synonymous with the Chinese way.

Note: This article and the one on Dao/Taoism were written during the Indiana Religion Studies Project Institute for Teaching about Religion in the Secondary Social Studies Curriculum. The drafts were critiqued by the social studies teachers who attended with an eye to supplementing and correcting the information in textbooks and other materials used by teachers. The two articles should read as a pair; they complement each other in much the same way these two religions complemented each other throughout Chinese history.