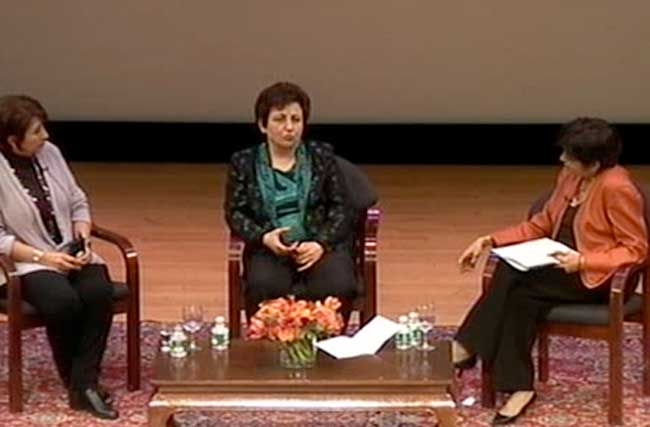 NEW YORK, March 3, 2010 - Iranian Nobel Peace Laureate Shirin Ebadi warned against additional international sanctions against Iran, claiming that they would harm the population, not the government.

"We oppose military action or economic sanctions because that is to the detriment of the people," she said.  The focus should instead be aimed at preventing global corporations from providing technology that assists direct repression, Ebadi argued.  An opponent of boycotting any country, she also encouraged foreigners to travel to Iran and meet with ordinary people to better understand the country.

Speaking at Asia Society headquarters in New York, Ebadi was joined by President Vishakha Desai in a wide-ranging conversation on topics that included the political situation in Iran, the importance of the women's movement in opposing the current regime, and the country's prospects for democracy.

Marking International Women's Month, the lawyer and human rights activist declared that women are leading the way towards democracy in Iran despite their degraded status in the Islamic state. The majority of university students in Iran are female, and women achieve the rank of professor, CEO, doctor, lawyer, or engineer. But despite having the vote and serving in parliament for more than 50 years, Iranian women now face a legal system that is "discriminatory and not compatible with the level of culture that exists in Iran."  Ebadi pointed out that women require their husband's permission to work, travel, and leave the country, and their testimony and even the value of their lives count for half that of men.

Citing the campaign for women's equality, Ebadi emphasized that Iranian women are not afraid to state their opposition to the regime and to demand justice for themselves and their children, "This movement does not have a leader or headquarters, it belongs to every woman, every person who believes in equality of rights."

Ebadi also noted that in the violent aftermath of the June 2009 presidential elections women were on the front lines, protesting peacefully, and cited the fatal shooting of 26-year-old Neda Agha-Soltan during Tehran's post-election protests.  "A woman became the symbol of the democratic movement in Iran."