From Past to Present and Present to Past 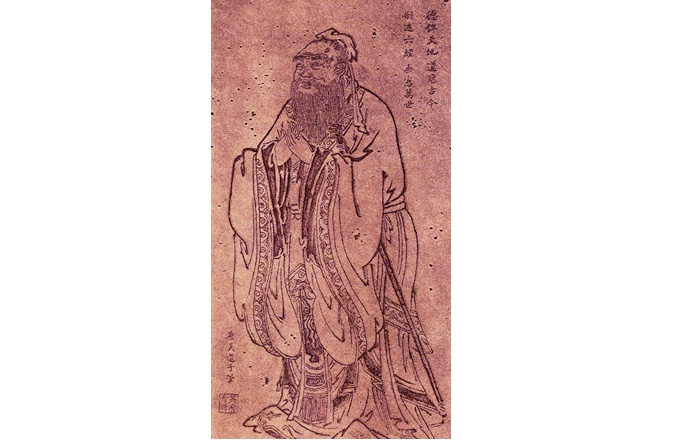 A short history of Chinese "religions." (The word "religion" did not enter the Chinese lexicon until the 19th century.) This essay examines Chinese belief systems, which refers to how people think and behave, philosophically and religiously. Key Chinese practices this essay will cover are ancestral rites and divination, the teachings of the philosophers Confucius and Laozi, and Buddhism. Appreciating the complexity of this rich and enduring culture is crucial to understanding the beliefs that have helped to shape China’s behavior and history.

Ancestral Rites and Divination (Shang and Zhou Dynasties, ca. 1600–256 BCE)
Two practices that extend from these ancient dynasties to the present are ancestral rites, performed in conjunction with the ancestral cult, and divination. Although they are not unique to Chinese culture–Romans and Hebrews also revered their ancestors and used divination to discern the workings of the supernatural world–both have outlived many other belief systems. Moreover, for the Chinese today, the veneration of the dead constitutes a meeting ground for past, present, and future as well as for different belief systems, such as Confucianism, Daoism, and Buddhism.

The ancestral cult was based on five key premises. First was the belief that the world was divided into three tiers: heaven, earth, and the underworld. The three levels, though distinct, were viewed as an interconnected reality. Second was the importance of lineage. A Chinese family was connected not only to their fathers and mothers of the recent past but those from the distant past. A common belief of the time was that every family traced its origin to Huang Di (the Yellow Emperor), the mythological progenitor of the Han people. The lineage system was vital for answering questions about origin and identity.

The third premise stated that the human body had two souls: the soul that ascends at death, the hun, and the one that stays with the corpse, the po. The hun eventually becomes a spirit (shen), while the po becomes a ghost (gui). The two-soul theory confirmed the multilayered reality in which the Chinese lived.

Fourth was the offering of sacrifices to their counterparts in heaven to show filial respect (xiao) and procure favors for the maintenance of the middle realm, earth. Generally sacrifice (ji) refers to gifts of wine and meat to a spirit that was in human form or an object in nature, such as a mountain, tree, or river. The most important–at least to the elite–were the rites performed by kings and, later, emperors. Provided these rituals were done correctly, the kingdom was assured of a prosperous year or the abatement of a calamity, such as a famine. Mistakes might lead to natural disasters and threaten the ruler’s throne.

Ancestral rites also were performed at the local and familial levels. It was common then, as it is today, to find ancestral temples and shrines in towns and villages dedicated to individuals, who became deities through legends surrounding their lives and deaths. In most homes there was an altar for wood plaques or paper with the names of deceased relatives.

The fifth feature of the ancestral cult embodied the roles played by mediators, such as shamans (wu) and ritual specialists or priests (zhu). Both the shaman and the ritual specialist could recognize the signs of a cosmos in or out of balance and the methods required to ensure harmony. Kings and male heads of families also were considered mediators; however, shamans and priests had more expertise in the arts of divination and performance of rites, and they were often recruited for services at both the royal and local levels. When ministering to the newly deceased, in particular, shamans and priests were called upon to perform certain rituals, including divination, to assure proper burial and treatment of the hun and po souls.

Divination, the art of using omens or magic powers to discern movements in the supernatural world, has long been an important decision-making tool for the Chinese. Whether it means consulting inscriptions on animal bones or tortoiseshells (see the Shang Oracle Bone in Section 2, Traces of Ideas) during the Shang and Zhou periods or using wood blocks to learn the response of an ancestor or deity in modern temples and homes, negotiating the three levels of heaven, earth, and the underworld through divination constitutes a point of continuity in Chinese religious culture.

Confucius (Kongzi, or “Master Kong,” ca. 551–479 BCE)
Confucius lived in China during the latter half of the Zhou dynasty (eleventh century–256 BCE). As a philosopher and teacher, Master Kong influences far more people today through classic writings, such as the Analects (Lunyu), than he did during his lifetime. He created a philosophy that later became a major influence in the organization of Imperial Age China and was adopted and modified in other countries such as Korea, Japan, and Vietnam.

Confucius emphasized principles for self-guidance. The key to producing a harmonious life, he wrote, is in how we treat others–our ancestors, leaders, parents, spouses, neighbors, and friends. The foundation for harmonious relationships is found in the principles of ren (benevolence), li (ritual/ceremony, often rendered as propriety/politeness), shu (reciprocity–“Do unto others . . .”), and xiao (filial piety–showing respect for one’s elders).

Two other concepts that were predominant in Confucius’s worldview were Tian (Heaven) and Dao (Way). His heaven represented a celestial power connected with the will of mighty ancestors, such as the widely known Yao, Shun, and Yü. The Way, on the other hand, constituted a natural path for humanity. Whereas Heaven emphasized choice, the Way required a yielding heart-mind (xin); both were crucial for achieving harmony in the earthly realm.

Laozi (“Old Master,” sixth or third century BCE)
The concept of Dao is more often associated with the figure Laozi and the classic Dao de Jing (The Book of the Way and Its Power) than with Confucius. It is not certain whether they were contemporaries. Their philosophies, though, are like two sides of a coin. Laozi emphasized harmony with the Dao–a referent to something that cannot be named–in order to achieve balance in life. To assist this process, Laozi taught his followers the concepts of non-action (wuwei) and shade and light (yin/yang–primordial, dynamic balancing of opposites). The principle of non-action meant that one should discern the natural course of things and cooperate with that movement. Thus, if a person was good at making clothes, he or she shouldn’t become a cook. The concept of yin/yang reminded Laozi’s students to look for the balancing forces of opposites and learn how to cooperate with and embody them. The teachings of Laozi and Confucius were not incorporated into a religious movement until the Han dynasty (206 BCE–220 CE). The result was a mix of philosophy and religion. Over the centuries that followed, both Confucianism (Rujiao—the teachings of the scholars) and Daoism (Daojiao—the teaching of the Way) developed elaborate rituals and sacred writings. To this day the philosophies of Laozi and Confucius, and the religious movements their lives and teachings inspired, exist in vibrant forms in Chinese, Korean, Japanese, and Vietnamese culture as well.

Buddhism in China (second century CE)
Buddhism, a cultural system of beliefs and practices based on principles of compassion and non-attachment, originated in the sixth century BCE in what is today Nepal. It was brought to China by Buddhist monks from India during the latter part of the Han dynasty (ca. 150 CE) and took over a century to become assimilated into Chinese culture.

One of the key forces of Buddhism’s success was Daoism. To help the Chinese comprehend Buddhist concepts, Buddhists borrowed ideas from Daoism via the Chinese language. Both Buddhism and Daoism benefited from this exchange. Daoists expanded their ideas about the cosmos and ways to structure their monastic orders. Buddhists gained a lexicon that made it easier to teach their tradition.

Over time Buddhism became a popular force in the lives of the Chinese, from the common people to the emperor himself. In fact, by the sixth century, Buddhism rivaled Daoism in popularity and political influence. It was during this time, and over the course of the next three centuries, that major schools of Chinese Buddhism formed. Two schools that retain their influence today are Pure Land Buddhism and Chan (Zen) Buddhism. Even in mainland China, where religion is often suppressed by the government, there are practitioners of these two schools of Chinese Buddhism.

Buddhism in China–as is the case with religious Daoism and Confucianism–also underwent many changes throughout the country’s history and was varied in its social and religious manifestations and philosophical beliefs. Most scholars think of Buddhism as many Buddhisms. In the so-called classical period of Buddhism in China (Tang dynasty, 618–907 CE), there were a number of schools of Buddhism that taught and promoted their own philosophies and meditation practices. The Huayen and Tiantai schools, for instance, varied in philosophy, location, and political influence. The teachings of various schools influenced and were adapted by Korea and Japan.

One of the most popular figures in Chinese Buddhism is the Bodhisattva Guanyin (the one who perceives the laments of the world–Guanshiyin). Having originated from Indian Buddhism as a superior being who aids the suffering of the world, Guanyin has become a key figure in the devotional practices of Chinese Buddhists and Daoists alike.

Popular Religion and Syncretism: The Present Reaching Back to the Past
Popular, or folk, religious practice in China today has elements as old as the ancestral rites of the Shang and Zhou dynasties and, dating from the Song dynasty (960–1279 CE), is marked by a propensity for syncretism–the combining of different forms of belief or practice. A good example is the construction of temple altars. It’s not uncommon to find Buddhist and Confucian figures in a Daoist temple. Nor is it extraordinary to see a selfprofessed Buddhist offer incense at a Daoist temple to a historical figure known for his Confucian virtues.

For most people in China, there is no problem with mixing religious practices. Unlike some other cultures, where religious syncretism and even tolerance are viewed with skepticism or condemnation, the Chinese have always had the ability to select the religious practices and teachings that work best for them at the moment. If a certain deity doesn’t answer a supplicant’s petition, then it’s on to the next temple and deity. In general religious pluralism simply adds to the many options from which the Chinese can choose on their journey toward a harmonious life.

Rites
A set way of acting or speaking during a ceremony.

Divination
The practice of predicting the future using omens or supernatural powers.

Filial
Proper behavior for a person, especially a son or daughter.

Shaman
A priest or priestess who uses magic for the purpose of curing the sick, predicting the future, and controlling events.

Primordial
Existing since the beginning of the world.

Supplicant
A person who prays to a deity.