The tenth episode in the series focuses on the topic of 家常菜 (Jiācháng cài), usually translated as “home-cooked food.” 家常 refers to the daily life of a family. Many restaurants will at least have a 家常豆腐 (Jiācháng dòufu), a “home-cooked tofu,” though it could also be translated in that context as the “house tofu.”

However, 家常菜, due to its simplicity and low cost, is a ubiquitous part of Chinese life. If you go into the countryside, you’ll see a lot of restaurants labeled 农家菜 (Nóngjiā cài), “country family food,” which tends to imply that the food is grown by the family cooking the food, though that might not necessarily be the case. One of the most memorable meals I’ve had in China was in Yangshuo, a village outside the much larger city of Guilin; biking back from rafting on the river, my companion and I grew hungry and stopped at a 农家菜 restaurant, where we had delicious eggplant over rice, pictured below: 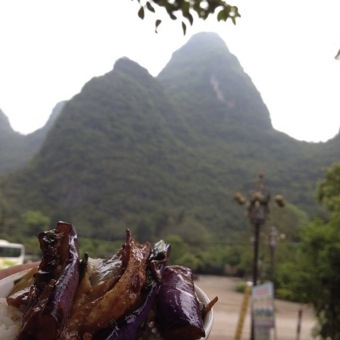 家常菜 has two meanings though. It has the one meaning in which it is a type of simple, cheap restaurant food, with a host of very recognizable dishes, as listed in the video. Pretty much all of them are my favorites, but 西红柿炒鸡蛋 (xīhóngshì chǎo jīdàn, tomato fried egg) and 地三鲜 (di sān xiān, literally “of three fresh,” but refers to a mix of eggplant, potato, and green pepper) are my personal favorites.

But it also truly refers to one’s own home cooking. I read an article by an author named Lu Wenfu who said, “nothing in the world comes close to homemade food,” going on to say that no matter where in the world he traveled, no matter how good the food was, the flavor could never be as good as that of his own 家常菜, especially his wife’s cooking.

To that end, I interviewed several students of varying Chinese heritage to find out what kind of 家常菜 they grew up with, as well as what 家常菜 means to them personally.

Evelyn is Taiwanese: “My mom mostly cooked Taiwanese food…we eat out more now that I’ve gotten older, but when I was younger, it was mostly Taiwanese food at home. I know what [my 家常菜] is, but it’s hard to explain it. Mostly rice. If it was noodles, it would be mostly for lunch: 麻酱面 (Májiàng miàn, sesame soy sauced noodle)，杂酱面 (Zá jiàng miàn, mixed sauced noodle). Or there would be one plate of meat dumplings and one of vegetarian. My sister loves ba wan, or 台湾肉丸 (Táiwān ròu wán,Taiwanese meatballs).”

Rosalyn is Filipino but her father’s heritage is Chinese: “My father is Filipino but a lot of Filipino food is Chinese-based. He learned his cooking from his father, and I would ask him what he did. So it’s made specifically the way my grandfather made it. Normal congee is supposed to be with pork tongue. Filipino congee is with chicken and ginger but my dad tends to leave out the ginger. We have something close to lo mein that we eat on New Year’s and birthdays, because, you know, “noodles are for long life,” stuff like that. We also eat 包子 (Bāozi, buns) but we call it siopao, which is the Filipinized way of saying it.

Maggie’s family is from Kunming, in the southwestern province of Yunnan: “My favorite is 番茄鸡蛋 (Fānqié jīdàn, eggs and tomatoes). [家常菜 is] healthy, super homey, super easy—because I don’t cook, my mom cooks. I see a lot of veggies. 红烧肉 (Hóngshāo ròu, braised meat, usually pork) is good. Maybe I’d say there are more bland flavors compared to restaurants. Home cooked meals are the only meals I can eat every day of my life; anything else I’ll get sick of.

Haoyun is from the city of Hengyang, in the south-central province of Hunan: “In my hometown we eat 腊肉 (Làròu, preserved meat) and 腊鱼 (Làyú preserved fish). You can eat that with pretty much anything. You can mix it with anything. It tastes kind of like turkey. At my grandparents’ house, they’d make 小龙虾 (Xiǎo lóngxiā, literally “small dragon shrimp,” but actually crayfish) because there were a lot of kids. Lots of 炒肉 (Chǎo ròu, often sautéed pork) too. We eat pretty much everything, anything. A lot of fish dishes. In my hometown we love to eat 甲鱼, (Jiǎyú, soft-shell turtle). My dad and my grandparents kill the turtle. We eat it at every single wedding.”

It should be clear from these responses that Chinese 家常菜 is as varied as any home-cooked meals anywhere else in the world, totally dependent on the cultural context and local flavors. Moreover, it’s important to note that everyone interviewed talks just as much about the homey feel, and about their family, as about the food.

I hope that you found this post valuable and informative, and that you now have a deeper understanding of 家常菜’s role both in the home and as restaurant food.

Please share it with anyone who you think would find it interesting: friends, family, teachers, students! More posts are forthcoming as we dive deeper into the immensity and many complexities of China.