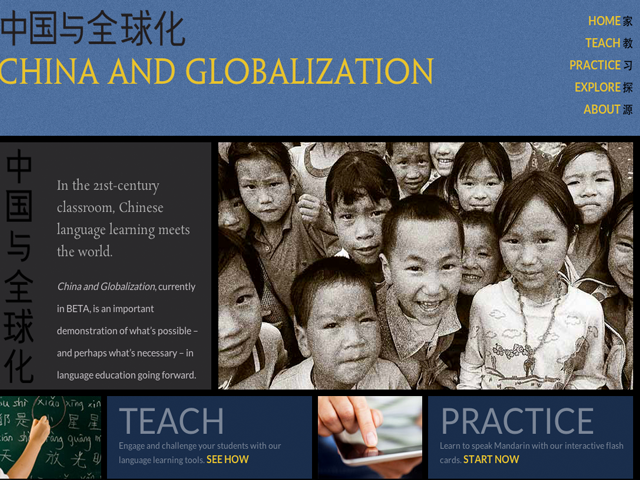 China and Globalization is a new website from Asia Society. It offers teaching and learning tools in both Chinese and English and can be used in Chinese language classrooms and beyond. The site features several multimedia features, like contextual videos and flashcards. Most of all, it is an important demonstration of what’s possible—and perhaps what’s necessary—in language education going forward.

Why China and Globalization? First, China has been a global culture throughout history, one that has been integrally connected with the rest of the world from the earliest periods through to today. Second, language learning should not be separated from the learning of other academic content; rather, intersections and continuities between the two should be consistently explored and built upon.

This project was conceived at a ripe moment in the field of contemporary Chinese language education, when mobile technology and interactivity are growing by leaps and bounds. Its concept was simple: Make modern Chinese accessible and relevant to a diverse population of learners—from beginners to heritage students—make it interactive and real-to-life, apply sound pedagogy and a flexible format, and offer it freely.

Before we get started learning and teaching, let’s take a moment to put China and Globalization in context.

The world is flat, borders are shrinking, the pace of life is increasing, we are becoming more global, interconnected, and inextricably bound together. We’ve all heard these buzz phrases again and again. But perhaps more surprising than the rapid pace of change the world is currently experiencing is the great degree to which we have been connected all along!

As the most populous nation on earth, sharing land borders with more than a dozen other countries and sea borders with even more, China is at the center of this globalized world—and has been for millennia. China as a geographic and political region has evolved from a narrow region around the Yellow River to a huge and sprawling nation with more than 20 provinces and administrative regions, 56 nationalities, and significant regional differences from north to south and east to west.

Starting in the eighteenth and nineteenth centuries and reaching a fever pitch in the nineteenth and twentieth, like many nations of the world, China embarked on an intellectual and cultural “journey to the West,” trying to balance its traditions and cultural heritage with the new knowledge coming from Europe. This journey was fraught with anxiety and despair, as the Middle Kingdom was forced to confront the West’s military technology and colonial aspirations. Ironically, it was probably during the Cultural Revolution—when China was inundated with the Communist culture of the West—that the nation was more isolated from the rest of the world than it had ever been before. In the twenty-first century, China has emerged as a major player on the world stage and is connected through commerce and culture with many other countries and regions.

Yet the encounter with Europe was not China’s first “journey to the West.” The introduction of Buddhism into China during the Han dynasty created a similar combination of enthusiasm and anxiety about “the West”—in this case, India. While many Chinese elites at the time considered themselves the source of all value and meaning, they were suddenly forced to confront another civilization that had produced a very powerful intellectual and cultural system. In the beginning of Buddhism’s introduction to China, many intellectuals declared that Buddhism must actually be Daoism in disguise, and they hypothesized that the sage Laozi had gone over the mountains into India and “converted the barbarians.” They simply would not admit or recognize that another civilization could produce a philosophical system that rivaled those of China.

And China’s engagement with the rest of the world goes back even further. There is evidence of contact with the Roman Empire, with the Greek kingdoms of Central Asia, and even traces of Chinese silk in ancient Egypt. So if we needed a test case for the role played by globalization throughout history, China would surely be a good place to start.

With these points in mind, we welcome you to explore China and Globalization. If you’re a Chinese language or social studies teacher (Teach) or a student of Chinese (Practice) or history or economics (Explore), take a look around and explore China in the world.