Celebrating the New Year in Asia 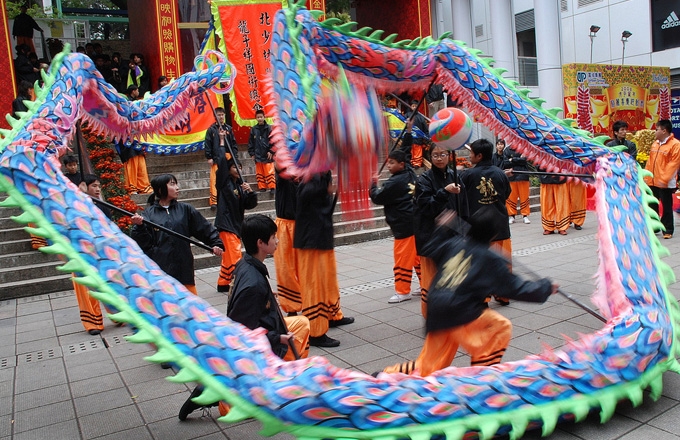 The Japanese scatter dried beans to drive evil from the house. The Chinese eat long-life foods. The Balinese observe a day of silence. Thais splash water on one another. People in many parts of Asia, as well as elsewhere in the world, love to celebrate a holiday marking the start of a new year – a festival of putting aside the problems and disappointments of the past, of finding new hope, of beginning anew. But when should the new year be celebrated? There is no obvious answer to that question. Days, months and years all flow continuously; there is no scientific way of identifying a particular day that marks a “new year.”

The day, the months, the seasons, and the year – the major divisions of the calendar – are determined by the physical properties of the solar system, especially the earth, moon, and sun. But not only is there no “start” to these markers of time, they also do not fit together very well.

A day is one revolution of the Earth on its own axis: twenty-four hours.

Therefore there are three basic types of calendar:

These calendars offer many possibilities for celebrating the start of a new year. Here are some of the most famous new year festivals of different cultures of Asia:

The Thai new year, Songkran, is now celebrated in Thailand, Laos, and some other parts of Southeast Asia on April 13-15 according to the Western calendar. In premodern times the date varied and was calculated according to a soli-lunar calendar. Songkran is a festival of purification, and its main feature is water-splashing. In fact Songkran resembles a big, friendly, three-day water fight. Everyone carries a jar or basin of water and splashes everyone else whenever possible; to splash someone is to give that person a blessing. (Tourists quickly learn to keep their cameras in plastic bags.) Another famous feature of Songkran is dragon-boat racing; teams of rowers propel long, narrow boats at top speed on rivers and lakes, with prizes for the winners.

Chinese New Year is defined as the second new moon after the winter solstice; thus it begins sometime between late January and mid-February, approximately at the beginning of Spring (which, in the Chinese calendar, starts forty-five days after the winter solstice). It is celebrated not only in China, but also in Korea, Vietnam (where it is known as Tet), and in Chinese communities throughout the world. Although there are many specific small differences among the celebrations of different communities, in general terms they are very similar.

Many customs are designed to bring good luck in the coming year. Before the beginning of the new year, people pay off all of their debts, if possible; it is bad luck to begin a year in debt. Children are given presents of money, wrapped in red envelopes (red is the color of good fortune), and children and adults alike put on new clothing. The house is cleaned, and new paper pictures are pasted up to honor the door gods, the stove god, the animal symbol of the incoming year, and lucky slogans such as “springtime” or “good fortune arrives.” People wish one another gongxi facai, “congratulations, may you get rich.” Perhaps the most important feature of a Chinese New Year celebration is a banquet, with many special kinds of food with lucky connotations: noodles for long life, fish (because the Chinese word for “fish,” yu, also sounds like the word for “abundance”), and sweet rice cakes for a rich, sweet life.

In premodern times Japan also celebrated a lunar new year (Setsubun), but since the adoption of the Western calendar in Japan in 1873 the official New Year’s Day has been January 1. Some people celebrate the traditional new year as well as the modern one; others have simply transposed the old customs to the new holiday. For example, at the new year every house is thoroughly swept, and dried beans are scattered in every room of the house to chase away evil spirits. Throughout Japan on New Year’s Eve, the bells of Buddhist temples are rung 108 times (for the number of beads on a Buddhist rosary); television stations broadcast the bell-ringing from temples with particularly large or famous bells, and many people watch the ceremony on TV.

If the Japanese celebrate the new year with bells, the Balinese celebrate it in silence. Most people on the Indonesian island of Bali follow an ancient form of Hinduism, brought from India centuries ago; and their new year, Nyepi, is based on a Hindu soli-lunar calendar. (Most other Balinese festivals follow a repeating 210-day cycle that has no connection to either the solar or the lunar year.) Nyepi is defined as the day after the new moon closest to the spring equinox. On Nyepi eve there is a lively festival, when people walk in procession, accompanied by gamelan music, to the main crossroads of their village. There they perform an exorcism ceremony to drive away evil, symbolized by huge monster-like paper-and-bamboo figurines. But on Nyepi itself, everything is silent. All over the island, streets are deserted. No fires are lit, no food is cooked, no music is played, and radios and televisions are turned off. It is forbidden to leave one’s house, to make love, or to talk more than necessary. Everyone welcomes the new year in silence, with reverent self-control.

Except for the Hindu Balinese, most Indonesians are Muslims, and many of them celebrate the new year on 1 Muharram, the first day of the first month of the Muslim calendar. For Sunni Muslims, this is a day for quiet celebration, and for reflecting on the significance of the Hegira, when the Prophet Mohammed temporarily moved from Mecca to Medina. That move established the first day of the first year of the Islamic lunar calendar (in the year 622 according to the Western calendar).

For Shiite Muslims, however, 1 Muharram is a day of mourning, marking the martyrdom of the Prophet’s grandson, Hussein. Instead, many Shiites as well as people of other faiths in Iran and nearby areas influenced by Persian culture welcome the new year on Nowruz, the spring equinox. Nowruz actually is pre-Islamic in origin, being associated with the ancient Persian religion of Zoroastrianism. In that faith, the conflict of good and evil is seen as a struggle of light to overcome darkness; thus the spring equinox, beginning the half-year in which daylight predominates over night, is an occasion of joyful celebration. The holiday season lasts for two weeks. On the Wednesday before the equinox, musicians perform in the streets, bonfires are lit, and children are given presents. Holiday tables, haftseen, are decorated with a candle, a copy of the Holy Qur’an, and an array of traditional foods with names beginning with the lucky letter “s.” At the exact moment of the spring equinox people exchange congratulations and good wishes. Customarily the first thing eaten after the moment of the equinox is an egg, symbol of new life.

These are only a few of Asia’s new year holidays; many other Asian countries and cultures also have distinctive festivals to welcome the new year. One of the pleasures of traveling in Asia is that the new year can be celebrated on so many days, and in so many different ways.