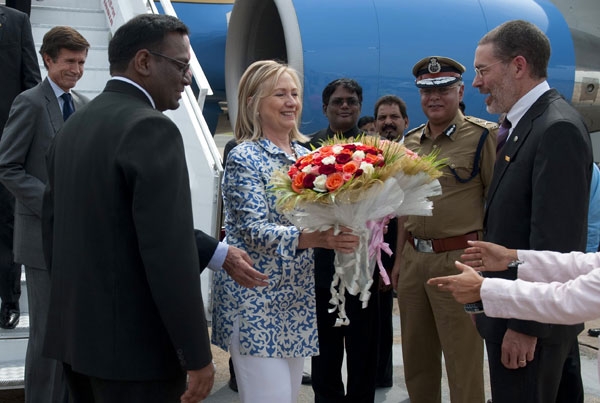 U.S. Secretary of State Hillary Clinton, who continues her swing through Asia this week, wrapped up two days of high-level meetings in India on Wednesday. On Tuesday in New Delhi, Clinton talked trade and investment and met with External Affairs Minister S.M. Krishna. And Wednesday in Chennai, Clinton tried to reassure India regarding the United States' troop drawdown plans in Afghanistan.

“The United States’ plan to withdraw 33,000 troops from Afghanistan by the end of next summer was certainly a central topic of discussion,” Asia Society Vice President for Global Policy Programs Suzanne DiMaggio said of Clinton's talks in India.

“As the U.S. begins the drawdown of its military presence, the Obama administration is actively seeking a political settlement on the future of Afghanistan among key players in the region, including India, Pakistan, Russia, Iran, and the neighboring Central Asian states.

"In order to diminish the prospect of a strategic rivalry or ‘proxy war’ between India and Pakistan in Afghanistan, the U.S. should strongly encourage India-Pakistan dialogue on Afghanistan and press Delhi and Islamabad to pledge not to seek a military presence in Afghanistan or to use Afghan soil to undermine the other.”

Asia Society Executive Vice President Jamie Metzl points out that Clinton's Asian trip "comes at a time of increasing uncertainty in the region."

“With China becoming ever more assertive, many Asian countries are looking to the United States to balance China’s rapid growth while at the same time avoiding unnecessary conflict," Metzl said.

"Asian attention is also on the United States, where increasing debt problems and an inability to address them politically put America’s staying power as a forward-deployed global force into question. Asian powers, however, should not underestimate the United States. Home to the largest and still most creative economy in the world, the U.S. will play a leading role in Asia for many decades to come.”

Clinton travels to Indonesia next for ASEAN meetings and the East Asia Summit. She then heads to Hong Kong and China.