Yu Lizhong: Global Competence Key 'To Do Well and to Do Good' | Asia Society Skip to main content

Yu Lizhong: Global Competence Key 'To Do Well and to Do Good' 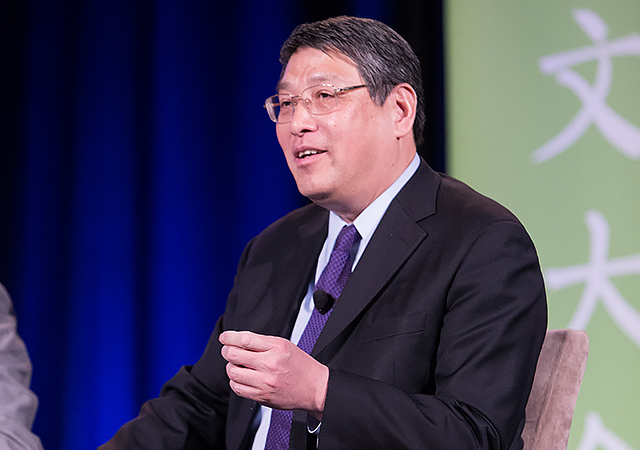 A native of Shanghai, Dr. Lizhong Yu has emerged as a leading advocate for the importance of global education. He has served as the vice chairman and chancellor of NYU Shanghai since 2012, following a six-year stint as the president of East China Normal University. In February, the Center for Global Education at Asia Society appointed Yu to serve as global co-chair along with social entrepreneur Ido Leffler.

In advance of the launch of the Center for Global Education, Asia Blog spoke to Yu about the genesis of NYU Shanghai, the advantages of global-minded education, and why global competence is necessary "to do well and to do good." The interview has been lightly edited for clarity.

Why is global competence important in today’s world?

On September, 22, Asia Society will be launching the Center for Global Education, with a series of high-level discussion panels focusing on the world's most pressing global education issues. Can’t make it to the event? Tune in Thursday, September 22, at 10:00 am New York time for a free live video webcast at AsiaSociety.org/LIVE. Learn more

First of all, global competence has become a basic personal survival skill in today’s world. To do well, one simply needs to be globally competent. We live and work today in a world defined by the steady convergence of cultures across the globe. This has been shaped in part by the explosion in international trade of the last four decades, along with the growing interdependence of economies, finances, and currencies across national borders. The volumes and routes of international trade today have surged to an unprecedented global level unlike any other regional trade centuries before — for example, along the historic Silk Road on the Eurasian continent. The world is getting smaller yet more connected every day because of the rapid advancement of the computer, the internet, and other communication technologies as well as transportation on land and sea and in the air. The heightened frequency of contacts at all levels across countries and continents, the greater extent of engagement and cooperation in between, and much more are undergirding even the convergence of our own aspirations. The world today demands more and more talented people who possess global outlook and cross-cultural communication capacity. Such talents, especially in the cutting-edge fields of science, medicine, and creativity, are being hunted today competitively on a global scale. The advancement of professional careers is increasingly achieved on a global platform, and the coming generations of college graduates must learn to survive and thrive on this platform.

Secondly, beyond one’s own well-being, there is a larger need which is to do good for others. On a basic and personal level, the concept of global competence covers an inherent element of global good citizenship which transcends countries and cultures. For a private person in any public setting, there is a set of desirable social behaviors expected by global good citizenship, such as giving seat priority to elderly and handicapped people, waiting in line, lowering one's voice, and not spitting or littering. A person with global competence will need to observe and apply such basic standards of global good citizenship both when in his or her home country and when traveling internationally. On a higher national level, there are many challenges we face today, whether economic or social, are actually challenges across nations on a global scale. To solve these common challenges, people in different countries need to work with each other with good faith and global competence. On January 1, 2016, the 17 Sustainable Development Goals (SDGs) of the 2030 Agenda for Sustainable Development — adopted by world leaders at the United Nations — officially came into force. In the next 15 years, the 17 Goals will apply universally to all countries. Each will have to mobilize resources, including human resources, towards achieving these goals.

In short, to do well and to do good, one needs to recognize that the world today already values more highly creative and innovative individuals who also understand how to overcome cross-cultural misunderstandings and help culturally diverse groups to work well together.

How can we make sure today’s youth grow up to be more globally competent than previous generations?

There is a tagline found on the NYU Shanghai logo: “Make the World Your Major.” The tagline for the Asia Society Center on Global Education is “Preparing Our Youth to Engage the World.” The two taglines actually convey the same idea.

The coming generations of college graduates need to be exposed to multicultural academic and social environments as early as possible and need to be encouraged to communicate, interact, and collaborate with people from different cultures as early as possible. At NYU Shanghai, we have students from over 70 countries — half from the greater China region including Hong Kong, Macao, and Taiwan, and half from overseas. They, as a whole, speak more than 70 languages. Our curriculum design, classroom teaching, extra-curriculum activities, student clubs, field trips, and internships all reflect and contribute to NYU Shanghai as a multicultural learning platform.

Many of our international students speak already several languages and will learn Chinese and all the Chinese students speak very good English and will learn other languages. In dorms, they are paired up so they have to learn quickly to survive and thrive in a multilingual and multicultural environment every day. For example, even daily routines like when to go to bed and at what degree to set the air conditioning would require a multicultural interaction. In student clubs, there must be at least two nations represented to create a multicultural work environment. On campus, our students all take some core classes such as Global Perspectives on Society. Our faculty, themselves from over 20 different countries, encourage our students to be curious learners and critical thinkers. Our faculty also encourages the students to be comfortable and confident when there may not be just right or wrong answers — or just one right answer.

Our faculty and staff work together to help our students see daily and local problems, such as air pollution in Shanghai, in a dynamic and global context, seeking various cultural perspectives and searching for solutions that are inclusive, sensible, and sustainable. Furthermore, our students can spend up to three semesters in NYU’s other 13 campuses and study-away centers around the world — a significant advantage. This learning and living experience, based on circulation in the NYU system in the world’s leading cities, certainly contributes more to their global competence.

How has NYU Shanghai — a joint venture between top universities in China and the U.S. — benefited from the collaboration of cultures and teaching styles?

NYU Shanghai is a brand-new experiment in global education. Because NYU Shanghai enjoys a double identity as a Chinese university and one of New York University’s three degree-granting campuses (along with the campuses in New York City and Abu Dhabi), it is at the forefront of a new breed of global higher education institutions.

While we are only at the beginning of our fourth year of teaching, already NYU Shanghai students appear to be displaying unusual levels of creativity, innovation, as well as capacity to think and act globally. Our senior class of students has now spent first two years at NYU Shanghai and their junior year studying away. You can see big changes: open, curious and critical minds, their way of thinking is different. They are much more tolerant of differences and ambiguities and know how to deal at ease with cultural differences and intellectual ambiguities. This is the power of an NYU Shanghai education. We are really proud of that.

For example, NYU Shanghai students organized a “Go Green” program across NYU’s three degree-granting campuses in Shanghai, New York, and Abu Dhabi and earned recognition from the United Nations. They staged the first “Flash Mob” performance in China — the energy and multiculturalism represented by our performing students inspired many youths in Shanghai and in China. They also hosted the first “hackathon” competition in China and worked in cross-cultural teams of college hackers from different countries for impressive outcomes.

NYU Shanghai is truly unique in the way it focuses on helping students develop the skill of working effectively with people from different cultures. Our students chose to come here in part because, unlike any other university in the world, NYU Shanghai ensures that every talented Chinese student has an equally talented non-Chinese roommate, and every talented non-Chinese student has an equally talented Chinese roommate. Every day, they are immersed in the project of understanding how cultures resemble one another and how they differ. Our students learn how to be an effective bridge — a voice people will listen to when they are working together in a multicultural environment.

The demand for quality education is almost insatiable. The track record that we are developing at NYU Shanghai for global competence will indeed benefit higher education not only in China but also around the world.