Why President Trump's New Afghanistan Policy Is 'More of the Same' 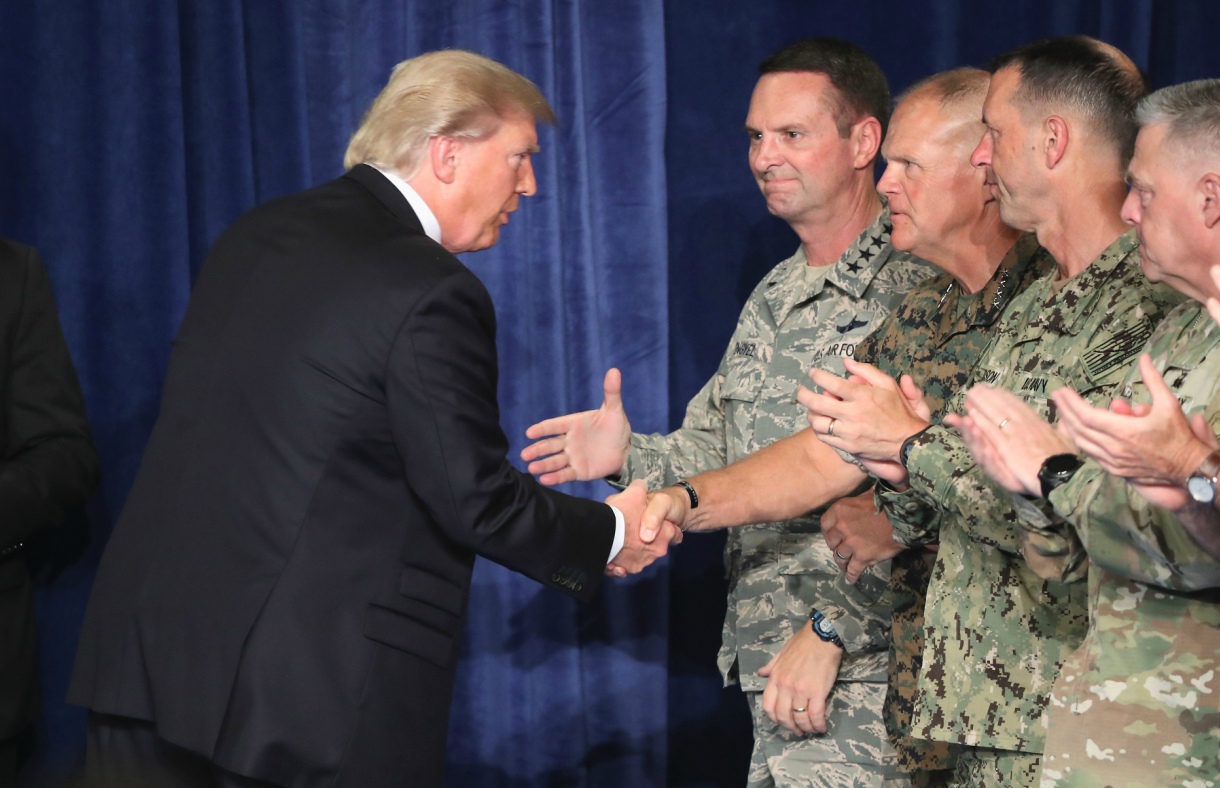 U.S. President Donald Trump greets military leaders before his speech on Afghanistan at the Fort Myer military base on August 21, 2017 in Arlington, Virginia. (Mark Wilson/Getty Images)

On Monday evening, President Donald J. Trump unveiled his Administration’s strategy to bring closure to the longest running war in American history. What we heard was expectedly underwhelming. Trump’s reluctant engagement with Afghanistan is not much of an improvement upon his earlier preference for a rapid withdrawal. Deploying an unspecified number of additional troops will put more American lives at risk; the question is, to what end? Trump’s lack of clarity on the way forward is at the heart of the policy challenge that is Afghanistan. While the Administration is spot on in terms of its focus on counterterrorism, compromising on the broader need for good governance, accountability, and transparency will undermine all other efforts to fight Islamist terrorism in the region.

President Trump’s new Afghan policy is hardly “new.” In fact, it does no more than restricts the scope of U.S. engagement in multiple ways and shifts a lot of responsibility onto the shoulders of regional players, especially Pakistan, without any specific details regarding incentives or punishments. Furthermore, Trump’s strategy fails to take into account the influence of China, Russia, and Iran on Afghanistan, as well as their local and regional alignments. These cannot be ignored. Predictably, another strategy review will be forced upon us in the not-too-distant future.

President Trump deserves credit for at least contemplating out-of-the-box ideas on dealing with Afghanistan. To be fair, the Afghan quagmire has been in the making for decades and none of the options placed before him by his advisors were easy to implement, given the intractable situation on the ground. In a nutshell, the Taliban’s resurgence is a reality, the Afghan republic is in shambles, and regional players are more interested in pursuing their bloody rivalries than in rebuilding Afghanistan. Kabul is more dysfunctional than ever. The booming narcotics trade is enriching the Taliban; warlords of all ethnicities (e.g., Pashtun, Tajik, Hazara, Uzbek, and others) are furthering ethnic, sectarian, partisan, and personal interests; and the Afghan leadership has yet to produce a viable and sustainable political economy that can help the country stand on its own two feet.

In the midst of all this, Washington continues to subsidize a highly significant portion of the Afghan budget and provide substantial support to the Afghan security forces. A departure at this moment would be deemed an American defeat and would certainly embolden the Taliban to move on Kabul. The ensuing power vacuum would present an open invitation to terrorists and criminals to enhance their sanctuaries across Afghanistan. Then there is the problem of convincing American taxpayers of the need for a major military surge. They would ultimately pay the price for a mere temporary improvement in battlespace dynamics. Thus, the Trump Administration was left with few options other than to rehash the existing policy recipe — essentially the same ingredients with a few additional spices (particularly the stern warning to Pakistan) and a flashy new label.

Parts of the policy are expected to be further developed by various U.S. agencies, given that the proposed strategy is unencumbered by any “arbitrary timeline” or definitive commitment to specific benchmarks. This pronounced flexibility is, perhaps, the only ray of hope that this strategy might grow into something more meaningful and coherent. However, every aspect of this revised strategy still raises critical questions that require clear answers for those who have to design and carry out its implementation.

An important challenge in operationalizing the strategy entails making sense of Afghanistan’s myriad militant groups. They range from numerous Taliban factions (including those who have joined ISIS) to Gulbadin Hekmatyar’s Hizb-i-Islami (a one-time U.S. ally), which recently signed a peace deal with Kabul despite the blood on its hands. Criminals aligned with various warlords across the country also collude with the Taliban in certain activities. Categorizing “terrorists,” therefore, has become a rather complicated matter.

Obama’s Afghanistan policy, refined during his eight years in office, ultimately focused on three goals: eliminating insurgent leaders, dismantling terrorist safe havens and preventing another Taliban takeover. That is exactly what Trump’s counterterrorism agenda can hope to achieve. The president, however, hinted at involving more U.S. Special Operations Forces, drawing on the painful lessons learned from the recent anti-Daesh (ISIS) campaign in Iraq. The Iraq model, however, cannot be replicated in Afghanistan for one obvious reason: the Taliban enjoy a level of public support which far exceeds that garnered by Daesh. Various private armed groups operating under the umbrella of the Popular Mobilization Forces (i.e., Iranian-backed Shia militias) have played a key role in countering Daesh, though they have reportedly committed human rights abuses against Sunnis.

In contrast, Afghanistan’s security forces are not remotely as competent as their Iraqi counterparts. As for Afghan militias, they remain an utterly incoherent lot. In short, it would be ineffective at best and counterproductive at worst to sponsor any such private militias. These disparities have critical implications for the revised U.S. strategy. Trump’s reference to lifting restrictions “that prevented the secretary of defense and our commanders in the field from fully and swiftly waging battle against the enemy” indicates that some of the rules of engagement will be relaxed. Put simply, the civilian death toll will continue to increase and galvanize the Taliban’s recruitment efforts.

No “Nation-Building” in Afghanistan

“Nation-building” has always been a controversial idea, and Trump’s decision to categorically distance the U.S. from such efforts is not surprising. Both [President George W.] Bush and [President Barack] Obama failed to shepherd the country toward a functioning body politic. Trump’s apparent departure from this effort, however, is deeply alarming given the continued need for capacity-building among the Afghan security forces. Only a well-trained army and police force representative of the country’s many ethnic communities can help usher in stability and security, especially in those areas where the Taliban are strongest: the rural heartland and periphery.

One fact needs to be acknowledged: The Taliban control over 40 percent of the country’s territory. In essence, this jihadist insurgency cannot be defeated unless the Afghan state can perform as a truly representative and functional government. Ironically, corruption is of graver concern to the average Afghan than the Taliban. The “new” Trump strategy leaves it up to Afghans to figure out how to improve their ability to govern the country — something that we know is not going to work. Ethnic divisions, tribalism, a rudimentary criminal justice system, and a thriving war economy — all products of decades of civil war — are insurmountable obstacles for a country that has not governed itself for almost four decades. Bottom line: Afghanistan needs an enormous amount of international support in this area, and for a long time to come.

Trump’s hardline stance on Pakistan was expected, given the deteriorating U.S.-Pakistan relationship over the years due to Islamabad’s failure (or refusal) to deny sanctuary to Taliban elements, especially the Haqqani Network. Pakistan’s defective counterterrorism policies and its risky utilitarian view toward “good Taliban,” including those who target India, has been a constant source of discord between Washington and Islamabad. However, there is no denying that Pakistan itself has been a major victim of religious extremism and terrorism.

More recently, the Pakistani state has been relatively successful in degrading its own domestic Taliban insurgent group: Tehrik-i-Taliban Pakistan (TTP). But the Afghan Taliban movement is a very different story. In fact, many of its top leaders enjoy near complete freedom of movement in Pakistan. It is no secret that Mullah Mohammed Omar, the movement’s founder, died in a Karachi hospital during 2013 and that his successor, Mullah Akhtar Mansoor, was killed in May 2016 by a U.S. drone strike near Quetta while returning from a road trip to Iran. American frustrations are, therefore, fully understandable.

But Pakistan has its own version of history and calculus for Afghanistan, both of which are based on its strategic imperatives and constraints. Let’s not forget that despite all of the accusations leveled against its policy in Afghanistan, Islamabad has played a pivotal role in all major global, regional, and bilateral peace and security initiatives related to that country. While there is no doubt that Pakistan’s policies are flawed, the South Asian nation is unlikely to comply with U.S. demands regardless of any threat to cut off financial assistance.

President Trump was certainly well-briefed on the challenge that an unstable Pakistan may pose, as reflected in his statement that “we must prevent nuclear weapons and materials from coming into the hands of terrorists and being used against us or anywhere in the world for that matter.” This nuclear capability puts Pakistan in a category of states that have to be dealt with cautiously and diplomatically, keeping in mind that Islamabad has mastered the art of negotiating with Washington, as one of its closest allies during the Cold War — particularly during the 1980s Soviet-Afghan War. In other words, Pakistan knows how to withstand U.S. pressure. Trump will need his best diplomats, if they are available, to force its hand.

Inviting India To Increase its “Economic Assistance and Development”

India has emerged as a key U.S. security and economic partner in Afghanistan, and Trump’s warning to Pakistan is sure to be music to New Delhi’s ears. However, the argument that India must do more to help Afghanistan in economic terms because it “makes billions of dollars in trade with the United States” is unlikely to be warmly received. In any case, inviting India to expand its presence certainly exacerbates Pakistan’s concerns. To expect Pakistan to obey Washington out of fear of an increased level of U.S.–India collaboration in Afghanistan is unrealistic. Moreover, such a move could provoke an even more dangerous proxy war between South Asia’s two nuclear-armed rivals.

While skillfully bringing India into the equation to shape Pakistani behavior, Trump failed to even mention Iran, Russia, and China in his speech — the other key regional powers that have a far greater stake in Afghanistan than does India. This omission was rather glaring and reflects a frighteningly superficial view of regional geopolitics. We cannot forget that Iran, whose interests in Afghanistan align with India, is working closely with New Delhi on many large-scale infrastructure projects. In particular, this including the development of Iran’s Chabahar port, which poses stiff competition to Pakistan’s Gwadar port (being developed with major Chinese investment). A tweet from a senior Chinese diplomat serving in Pakistan is telling: “USA is adopting a carrot-stick approach towards Pakistan as it has conditionalized friendship with Pakistan.” Russia’s recent initiatives in Afghanistan, especially its opening up of communication channels with the Taliban, are quite insightful and indicative of the new “Great Game” being played out in the war-torn country. Given all of the above, Washington’s current Afghanistan policy needs a serious upgrade if it is to remain relevant in the emerging multi-player scenario.

Transforming Afghanistan from a failed to a functional state — a prerequisite for regional and global security — cannot be accomplished in the short term. In addition, military means alone cannot achieve this goal, as the history of modern counterterrorism and counterinsurgency has proven. Afghanistan needs a comprehensive post-conflict reconstruction and peace building process based on nurturing both its military and civilian institutions — one that goes far beyond Trump’s new policy. Any policy that fails to empower those Afghan men and women courageous enough to challenge religious extremism and support inclusivity will result in failure. In the absence of such a comprehensive approach — something Trump only alluded to rhetorically — South Asia, in general, and Afghanistan, in particular, will face more instability and violence, in turn creating more complications and challenges for the U.S.