While in India, Oprah Eats With Her Hands, and the Media Strike Back | Asia Society Skip to main content

While in India, Oprah Eats With Her Hands, and the Media Strike Back 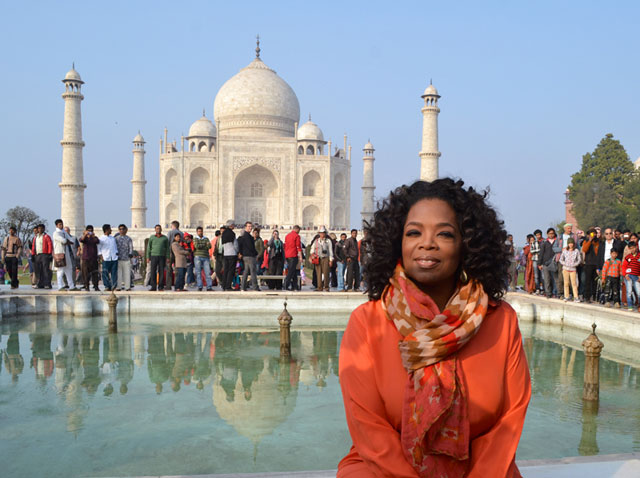 Oprah Winfrey in front of the Taj Mahal on January 19, 2012. Winfrey was on her first visit to India to film an episode of her show 'Oprah's Next Chapter.' (STRDEL/AFP/Getty Images)

Oprah Winfrey's recent TV special on India generated quite a buzz in the past week. Many media sources reviled Oprah for her portrayal of a people who "still eat with their hands." Rajyashree Sen's "You still eat with your hands? Oprah’s magical mystery tour of India," went viral as it drew attention to Oprah's several clichéd experiences. "Myopic, unaware, ignorant and gauche. This was Middle America at its best worst," was Sen's most retweeted statement.

Other sources, ranging from The Wall Street Journal's India Real Time blog to Kafila, have been less harsh. India Real Time contributor Tripti Lahiri argues that Oprah exposes many realities of India that would otherwise go unnoticed. Kafila's Dan Husain notes the similarities between his first journey to the United States and Oprah's to India.

Meanwhile, a second India Real Time post, "Oprah, Obama and India's Insecurities," argues that Indians have reacted too defensively in the face of critique. Margherita Stancati writes, "Sure, we don't need Oprah to tell us many in India are still poor — but why does the public get a lot more prickly when it's a foreigner pointing this out?"

In either slamming Oprah for her "eating with hands" comment, or forgiving her for shortsightedness, the media have ignored the more problematic trends associated with Oprah's Next Chapter: Oprah Travels to India. Yes, Indian media can be hypersensitive to outside political criticism, but that doesn't excuse Oprah for promoting clichés about India in her special.

In reaction to the Kony2012 controversy this March, novelist Teju Cole brazenly tweeted, "This world exists simply to satisfy the needs — including, importantly, the sentimental needs — of white people and Oprah." The Atlantic later published his tweets and commentary in "The White Savior Industrial Complex." Throughout her travels in India, Oprah merely performs her savior persona and shrieks superlatives such as "This is the craziest-ass thing that ever happened to me." While bidding the Hedge family farewell in the Colaba slums, she looks directly into the camera and smiles for a second while tossing the second Hedge girl in the air and giving her wet Oprah kisses. As she reflects on her horse-driven carriage ride with Rajasthani royalty in Jaipur, she says, "To this day, my favorite shot is my head thrown back, going "Whoaaaa!'" Needless to say, Oprah is a genius at satisfying the sentimental needs of the camera.

Throughout her Next Chapter, Oprah points out that she continues to be faced with the "paradox of India." For her, the paradox mainly lies in the fact that the hyper-wealthy live side-by-side extreme poverty. She acts surprised to see how frugally some Indians live, and she sensationalizes the lifestyles of the rich. On CNN-IBN, Rituparna Chatterjee's "An open letter to Oprah Winfrey from an Indian who eats with her hand," explains: "We have seriously twisted issues.… Our problems are generically different from yours. But we don't make a spectacle out of yours. That's the difference." This is why the public "gets more prickly when it's a foreigner pointing out" poverty in India. Even though poverty in India is a critical issue, to make it a tourist stop on a two-week voyage through India is uncharitable.

Oprah demonstrates a paradox of her own throughout the special. She seeks to learn through her experiences while at the same time pedantically informing her viewers about India. She admits, "I could go to India ten more times, and just begin to touch the surface of what is India." But that does not keep her from edifying her viewers on everything from the meaning of namaste to alleged hardships of an arranged marriage. From adorning herself in a "traditional" Indian sari to eating in a "traditional" meal, she reduces the traditions that the purported majority of Indians practice to her two-week experience. In discussion with a group of Indian ladies from various strata of society, she asks Geeta, a 32 year-old single woman, "Is there any part of you that is miserable or that thinks that you are not good enough because you're not married?" Geeta responds, "If a woman is dark-skinned, [India] is a miserable place to be." Oprah then launches into dialogue on intra-racism in America, which she felt she was a victim of in the black community. Immune to nuance, Oprah reduces social structures in India to ones that both she and her viewers can digest.

It doesn't seem fair to expect a sophisticated perspective from someone who crams India into two hours. Nevertheless, this doesn't pardon Oprah for clichéd value judgments, which is why the media reacted the way it did. Most interestingly, the reactions to Oprah's Next Chapter: India emphasize how television today must stand the test of social media. When an American produces a TV special on India, it circulates beyond the West. Ideally this reality will inspire Oprah and other personalities who want to give India to the world to do some homework before daring to broadcast.