Where Hillary Clinton's China Policy Would Differ From President Obama's 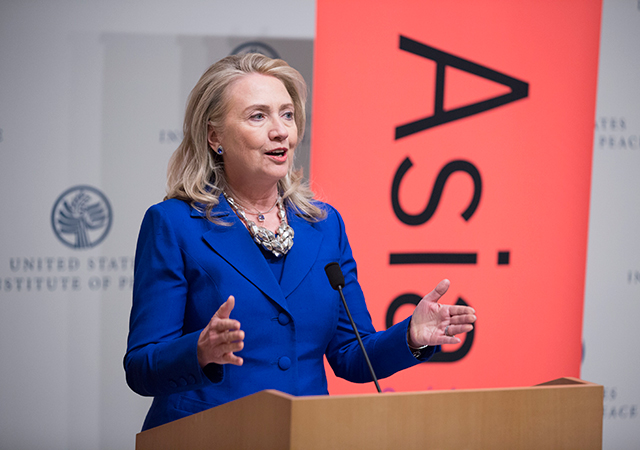 Democratic Party presidential frontrunner Hillary Clinton is no stranger to the Asia-Pacific region, conducting 61 official visits during her 2009-2013 tenure as Secretary of State, as well as plenty more in her eight-year stint as First Lady. Should Clinton capture the presidency in November, her past association with the region — and the issues she focused on — provide an indication of how her policies may depart from Barack Obama.

On Thursday, September 15, at 6:30 p.m. Asia Society New York welcomes Winston Lord, former U.S. Ambassador to China, and Orville Schell, the Arthur Ross director of the Center on U.S.-China Relations at Asia Society, for The U.S., China and the 2016 Vote discussion. The conversation will be moderated by Emily Parker, author and former policy advisor at the U.S. State Department. Click below for tickets and additional information.  Learn more

One relationship that observers would scrutinize closely would be Clinton's with China. On the surface, U.S.-China ties — which have gone through the usual ups and downs under President Obama — would not likely change drastically under Clinton, who has, after all, positioned herself as the establishment candidate. Both American and Asian sources regard Clinton as a key architect of the Asia “pivot,” later called “rebalance,” that served a central tenet of the Obama administration's foreign policy. Like Obama's, a Clinton administration would likely apply pressure on China over maritime issues, as well as maintain his administration's strategies and policies on cybersecurity and climate change.

However, the similarities largely end there.

Clinton is generally considered to be more hawkish than Obama, and the two are said to have differed over key aspects of the president's policies in the Middle East. A Clinton presidency, analysts believe, would lead to a more assertive U.S. policy toward China.

“During her time as Secretary of State, Mrs. Clinton made comments with regard to China, that I would consider more robust than [Obama Administration Secretary of State] John Kerry's,” Joshua Eisenman, assistant professor at the Lyndon B. Johnson School of Public Affairs at the University of Texas and senior fellow for China Studies at the American Foreign Policy Council in Washington, D.C., told Asia Blog. In 2010, Clinton laid out the national interests of the U.S. in the disputed waters east of China, calling for "freedom of navigation, open access to Asia's maritime commons, and respect for international law in the South China Sea." In a 2010 speech about internet freedom, Clinton also criticized China for censoring and stifiling the free flow of information — a position that was not well-received by Chinese state-run media.

Clinton is not a universally popular figure in China, where she is occasionally subject to sexist rhetoric. But concern in the country that she would adopt a more assertive stance toward Beijing have basis in Clinton's past statements about the country.

“This goes back to 2008 election, when there was a preference for Obama in Beijing because they were concerned about some of her comments during the race,” Eisenman said. “And I don't think her positions as Secretary of State assuaged those concerns. In fact, some may have exacerbated them.”

“She has made clear that she thinks differently about America’s role on the world stage than President Obama does,” Lawrence J. Haas, senior fellow at American Foreign Policy Council, told Asia Blog. “She has talked about the downsides of an American absence around the world, saying that bad things tend to happen when America does not lead.”

As Secretary of State, Clinton supported an aggressive strategy in Syria and the American intervention in Libya. Later, she indicated that the U.S. could have done more to counter Russia’s incursions in Ukraine. These positions have occasionally put her at odds with the president, who, Haas argues, "seems to think that the world would be a better place if America reduces its role around the world."

Throughout her career in the public spotlight, Clinton has never hesitated to criticize China’s human rights record — something that has not gone unnoticed in Beijing. In 1995, the then-First Lady appeared at the UN Fourth World Conference on Women in Beijing and highlighted the abuse of women in China and around the world, sparking a controversy that later led Clinton to temper her remarks. As a presidential candidate in 2008, she publicly called for the boycott of the Beijing Olympics due to China's treatment of its Tibetan population. Time has not softened her approach. Twenty years after her landmark speech in Beijing, Clinton called out Chinese president Xi Jinping on Twitter last year for hosting the annual UN Women’s Forum while simultaneously persecuting five feminist activists who had launched an anti-sexual harassment campaign. Clinton referred to China's seemingly contradictory actions as "shameless."

In contrast, Obama has been less vocal in his criticism of China's human rights, earning accusations of soft-pedaling from skeptics who believe the president's preference for dialogue has not always worked.

The Democratic frontrunner, according to Haas, would adopt a different approach.

“I think Clinton will be far more clear-headed about the role of diplomacy than Obama has been," he said. “She will try to make progress with our adversaries through diplomacy, but she won’t see it as an end to itself. She will see it as one tool in the U.S. toolbox, but she’ll make clear that we have other tools, including force when necessary.”