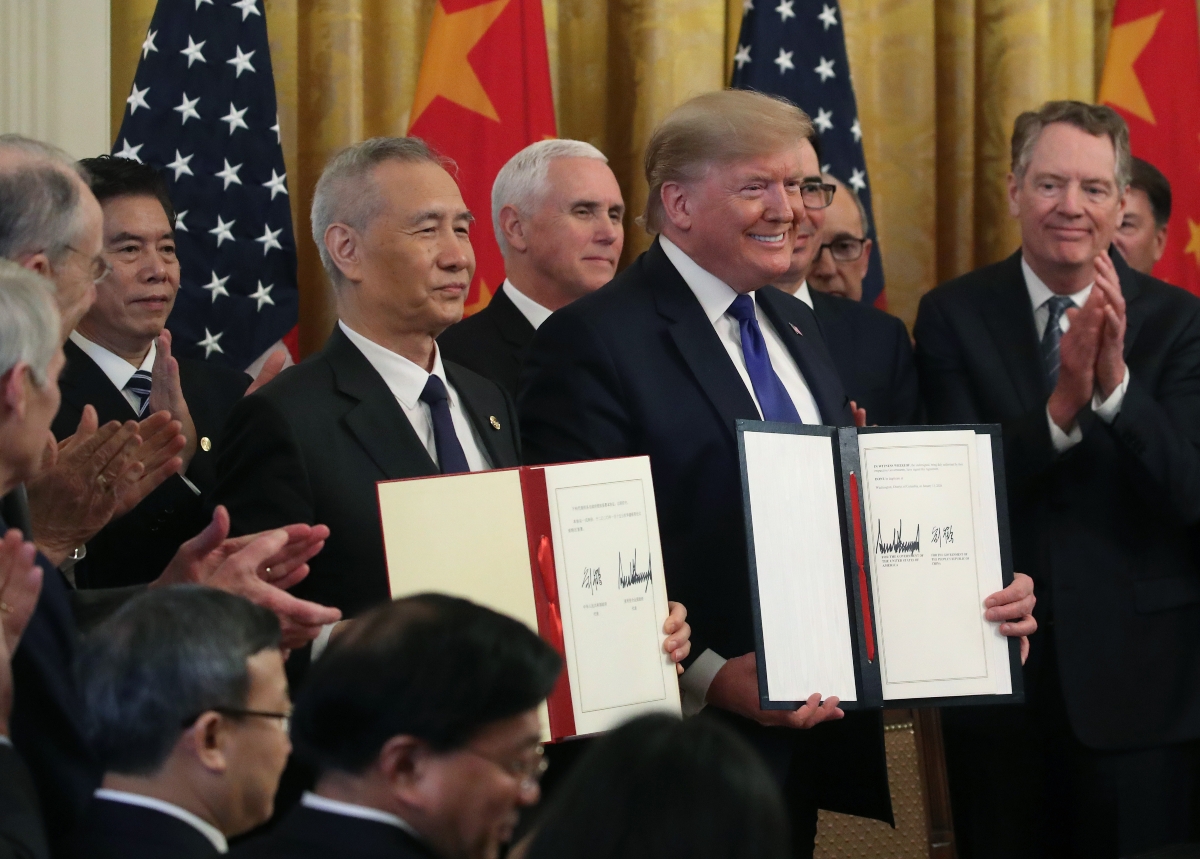 President Donald Trump and Chinese Vice Premier Liu He, hold up signed agreements of phase 1 of a trade deal between the U.S. and China, in the East Room at the White House, on January 15, 2020, in Washington, DC. (Mark Wilson/Getty Images)

U.S. President Donald Trump signed the first phase of a new trade deal with China on Wednesday, calling the agreement “a momentous step toward a future of fair and reciprocal trade” and one that “rights the wrong of the past.” China’s chief trade negotiator, Vice Premier Liu He, in turn, said the deal was “conducive to world peace and prosperity.”

The New York Times has a useful summary of what’s in the deal and what still needs to be addressed in subsequent negotiations. They also provided the full document released by the Trump administration.

ASPI Vice President Wendy Cutler, a longtime diplomat and negotiator in the Office of the U.S. Trade Representative:

The U.S.-China phase one trade deal is meaningful with substantive provisions, yet falls way short of the ambitious objectives that the Trump administration set out at the start of the talks. This is not surprising. China is a formidable negotiating partner, the expected negotiating leverage from tariffs didn’t fully materialize, and U.S. interests were increasingly hurt by the tariffs.

The deal will de-escalate tensions between the U.S. and China, while averting the scheduled tariff increases and rolling back some tariffs. The chapters on intellectual property rights and agriculture non-tariff measures are the most detailed, addressing many long-standing bilateral concerns. The technology transfer language is a good first step, but quite vague. The absence of disciplines on subsidies and the operation of state-owned enterprises is disappointing, particularly given the administration’s emphasis on tackling these matters. The purchasing commitments raise WTO concerns and smack of a managed trade approach.

There are three key differences between this agreement and previous U.S. deals with China. First, the phase one deal includes extensive Chinese purchasing commitments of U.S. goods and services. Second, a substantial amount of U.S. tariffs will remain in place, continuing to apply to about two-thirds of Chinese imports. Third, the agreement features a dispute resolution mechanism, providing for the re-imposition of tariffs should consultations fail to head off violations.

While the phase two talks will be launched in the near future, the likelihood of any rapid conclusion is remote. This is because the more difficult matters, including subsidies, the behavior of state-owned enterprises, and cyber concerns have been put off to this phase. Not only do they not lend themselves to quick fixes, they are at the heart of China’s economic model, making sweeping and timely Chinese concessions unlikely.

Washington and Beijing will each have incentives to ensure that implementation of the phase one agreement goes smoothly. Beijing will be loath to subject its exports to further tariff increases. Washington will want to show that this deal can stick, particularly during an election year. Thus, we can expect both sides to work hard through the mandated 90-day consultation period to address violations. Of course, depending on the nature and impact of a potential problem, and how the politics shake out, it can’t be ruled out that the U.S. would re-impose tariffs.

Third countries will be most concerned about the massive purchasing commitments, particularly whether these procurements take place at their expense and fall afoul of WTO rules. That said, other countries should welcome the de-escalation of trade tensions between Washington and Beijing and those provisions which will be applied on a most-favored nation basis.

ASPI President Kevin Rudd, in attendance at the White House for Wednesday's event, on the CNN program Quest Means Business:

“I would give [the deal] a reasonable mark: five or six out of 10. And that, in terms of where we were before, isn’t all that bad.”

Good to attend signing of Phase 1 US-China trade deal at the White House. I see it as 1) a 12 month ceasefire in trade war - good for global economy; 2) some progress on intellectual property protection; 3) hard stuff pushed into Phase 2) which is still a long way off, if ever. pic.twitter.com/P1KwKs7hQb

“From the Chinese perspective, the time had come when Trump calculated it was politically expedient to cut his losses and close the deal. This convinced them their strategy of talk-talk, fight-fight, had been the right one, and that they were justified in not having made fundamental concessions since his political need to finally close a deal presented them with an opening.”

Today's deal with the Chinese proves 2 things:
1. Trade wars are not easy to win.
2. China isn't buying soybeans, it's buying time... time to see how U.S. elections pan out; time to gear up for the "struggle" ahead over tech, standards, and influence.