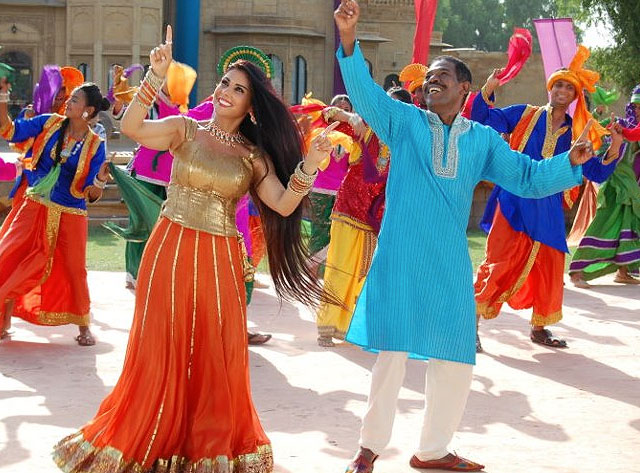 Since the 1940s, the Middle East has been the number-three importer of Bollywood cinema. But in contrast to the United States or England, the market in the Arab world's Bollywood hasn't been dominated by the South Asian diaspora. The purveyors of Bollywood cinema in Arab countries weren't necessarily South Asians living abroad, but Arabs themselves. Last month, for instance, Arab News reported on an Iraqi film seller, Adil Hamid Khalaf, who can sing the tunes from the movies featuring his favorite hero, Amitabh Bachchan, in Hindi. Khalaf expressed his distaste with the turn South Asian cinema has taken recently, lamenting the fact that whereas old Bollywood films brimmed with family values, today they are full of violence.

Interestingly, the Arab News report came as Gulf network OSN is in its second season of a television serial entitled Hindustani, which features Arab actors speaking and singing in Arabic but decked in Bollywood garb and busting moves like Sharukh Khan and Kajol.

In an OSN interview about Hindustani, the serial's Iraqi director, Aws al-Sharqi, mentions that he traveled to different parts of India to shoot the program and that the cast's styles of dress and dance reflect those various regions of India. Nevertheless, in his direction of Hindustani al-Sharqi doesn't ignore his predominantly Arab audience. The comedic stories focus on marriage and family values that resonate with Arabs. Many episodes feature a typical situation where the husband or wife figure reneges on his or her duties, and one rebukes the other. Most of the dancers for his production are Indian, while the songs are mainly in Arabic. Al-Sharqi explains how Bollywood cinema's use of music and color is why he has chosen to adapt it as his medium. He emphasizes that the "mazeej min alwaan," or "mixture of colors," is one of Bollywood's defining characteristics — and through Hindustani, he renders that mixture in an Arabic-speaking context.

Hindustani plays on Arab awareness of common Bollywood themes. Khalaf, the Iraqi film seller, is not the only Arab who has been singing Hindi film songs for decades. In 2006, Gulf News reported accounts from various Gulf nationals on their relationship to Bollywood cinema. Emirati national Shathra Ahmad, 22, stated, "I can speak a little Hindi, but everything I know is from the movies..." The Times of India published a similar story the same year. Bollywood offers Arabs a way to connect to a culture with which they have vague cultural and even linguistic affinities: institutions of family and marriage are revered in similar ways in the Middle East and South Asia, and Hindi-Urdu has several Persian and Arabic loan words.

In Egypt, Bollywood films are a widely accepted from of public entertainment. As a South Asian American traveling in Egypt recently, I was often asked jokingly by locals if I knew Amitabh Bachchan personally. Many of my friends whose families had lived in the Gulf and returned to Egypt related their shared cultural experiences with the South Asians they had encountered abroad. This Arab awareness of Bollywood is what leads to a seemingly unforced melting pot of cultures in Hindustani.

Although a Gulf Network produces Hindustani, for the past two years the serial has been circulated to Arabic speakers worldwide. The dialect in which the actors sing and speak is mostly the Gulf dialect of Arabic, which implies that the serial carries a regional specificity to the Gulf in spite of its widespread circulation. This is worth noting because 17% of the Gulf states population, around 6.5 million people, is made up of South Asians — the region's largest expatriate community. According to Samir Pradhan's "Gulf-South Asia Economic Relations: Realities and Prospects," in 2008, trade between South Asia and the Gulf stood at $32.4 billion. Pradhan's research shows the growing economic interdependence between the regions due to rise of cooperation between South Asian and Gulf financial institutions. Though the profits seem vast, many South Asian expatriates in the Gulf work as migrant workers, and lead lives shaped by the desire to earn money to support families in their home countries. For these expatriates, the Gulf becomes an extremely transient space. This environment of a huge South Asian expatriate community and strong economic ties makes a serial like Hindustani less surprising.

In the broader context, serials such as Hindustani demonstrate that Western cultural developments aren't the only ones being adapted across the globe, and that Asia has something to offer modern culture. Rock and roll and film noir are not the only modern genres being explored by other cultures. Asian goods and ideas have been exported for centuries, but Hindustani seems to be enabled by new trends in globalization and the willingness to share. The global yoga phenomenon and the Beatles playing the sitar are different from Hindustani, because Bollywood cinema isn't connected to a foreign spiritual journey Westerners tend to have in the East. Bollywood Arabia is raw modern entertainment. Granted, the term Bollywood was born from Hollywood, but Hindustani's cultural miscegenation clearly emphasizes that all parts of the world aren't striving to be more culturally Western, and in fact, the global economy is beginning to yield a very different story. The core of Bollywood — high drama, colorful song and dance, and playfulness — is not exclusively for South Asians, but speaks to a wider audience, to the extent that it is now being produced in Bollywood Arabia, in Hindustani.