Ten of the Biggest Stories from China in 2014 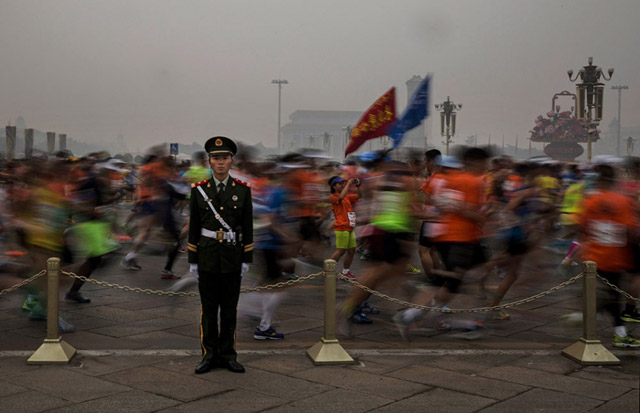 Runners in masks file past a soldier during the Beijing Marathon. (Kevin Frayer/Getty Images)

It’s hard to believe, but ChinaFile is almost two years old. It’s been an exciting year for us, and, as ever, an eventful year for China. It was a year of muscular leadership from Xi Jinping, who has now been in office just over two years and who appears to be successfully consolidating his power within the Chinese Communist Party as he tightens his grip on a whole range of areas of Chinese life.

The state he leads continues to face enormous challenges in the realms of environmental pollution, tensions with its Asian neighbors, ethnic conflict within its borders, corruption, income inequality, and the quest to be respected and trusted abroad. Increasingly this year, China’s leaders seemed mistrustful of the Chinese people’s enthusiasm for their programs, or so suggest new restrictions on the Internet and culture, new pressures on journalists, a ban on puns, and the arrest of critics including one of the country’s leading defenders of free speech. Relations between the U.S. and China ended the year on a promising note, as the two countries agreed to commit themselves to a long-overdue plan to combat climate change. But the relationship has also cooled to what, to some, feels like a dangerous chill.

ChinaFile has maintained its dual focus this year, looking at both these large forces of nature and politics, and at the responses of Chinese people to the world changing around them. We also began to look more closely at how people elsewhere in the world view China’s impact in their own homes — a task facilitated by our new partnership with the China Africa Project and by a series of stories about a trans-oceanic canal a Chinese company plans to build in Nicaragua. Look for more coverage of this type in the year to come.

Our weekly ChinaFile Conversations have ranged from U.S. responsibility for Chinese pollution, to restrictions on the Internet and culture, reforms to China’s legal system, the downfall of former security czar Zhou Yongkang, Alibaba, the politics of Chinese language education, Japan, Xinjiang, Michelle Obama, Gary Locke, and the protests in Hong Kong.

Our library of interviews with authors of China books now houses 150 videos. Have a look at Books Editor Laura Chang’s list of her top five books of 2014.

As in our first year, we were grateful to work closely with publications who published our reporting and let us publish theirs. That list grew this year to include Foreign Policy, The World Post, The News Lens, the Sinica Podcast, The New York Review of Books, Tea Leaf Nation, The South China Morning Post, Sohu Business, chinadialogue, and Caixin. And we collaborated with our Center’s other publications, China Air Daily and the Chinese-language U.S.-China Dialogue. As you celebrate the new year, we hope, you’ll have a look back in particular at the ten stories below for a taste of our best work in 2014. AUGUST 12, 2014 — “A migrant worker from Henan who says of his austere life in the capital: ‘In Beijing, all I have is this bed.’ A farmer’s daughter who is determined to find the ‘space to imagine freely.’ And, an idealistic student who wants nothing more than to ‘truly improve the lives of ordinary Chinese people.’ They live in the age of the selfie, of headphones, of the smartphone video. Each shows us that, in a city with a population larger than that of Australia, it is possible to be both alone and awakened by the urge to dream.” On Dealing with Chinese Censors

OCTOBER 14, 2014 — “In the end, I found my clash with the censors instructive. We went back and forth on the final points, with cell phone debates on alternative wordings of the last few issues that went right down to the day before the manuscript went to the printer. It was a useful opportunity for a foreigner to experience the world in which all Chinese writers live. Perhaps the most important concession I extracted was a clear statement in the preface to the Chinese edition that some parts had been deleted or changed, and in this respect the English edition should be regarded as authoritative.” Down to the Countryside

DECEMBER 15, 2014 — “Such precipitous, rapid, and massive urbanization inevitably causes reactions. And in this beautifully shot short film, we are introduced to one urban ‘back-to-the-lander,’ Ou Ning, who for all the understandable reasons has moved his family from Beijing to the countryside in the storied Huizhou region of Anhui Province.” Against My Fear, I See That You Hope...

SEPTEMBER 29, 2014 — “I am inspired by the way you understand your role in society. After the speeches, a group of you stepped forward to explain why you have joined the movement. You told us that you study social work, you described extreme inequality in Hong Kong and people living in human cages, and you said that you defend social justice. You explained that you were studying to be a lawyer, and you outlined the idea of the rule of law. You said that you were going to be a doctor, and you asked what diseases plague Hong Kong. Your job is to come to the rescue, you said, and your job is to cure.” The Debate Over Confucius Institutes

JUNE 23, 2014 — “Last week, the American Association of University Professors joined a growing chorus of voices calling on North American universities to rethink their relationship with Confucius Institutes, the state-sponsored Chinese-language programs whose policies critics say are anathema to academic freedom. We asked contributors to discuss the debate. Specifically: the costs and benefits of having a Confucius Institute on a university campus; the economic forces at play; and the role of China in university life more broadly.” JUNE 3, 2014 — “This year, the annual rituals of erasure have taken on the peculiarly zealous quality of an obsessive-compulsive’s locking and relocking of the same door: relatives of those killed have been forbidden to visit Beijing to mourn their loved ones; a small group of scholars and former activists who held a private commemoration were detained on charges of 'creating a public disturbance'; police have grabbed people in the Square for taking selfies. But memory persists — and its champions have new tools to tell and transmit their story.” SEPTEMBER 2, 2014 — “Do you think we’re going to end up like Tibet?’ We’re in the spring of 2011, and the abrupt question from my Hong-Kongese running coach, as we going up a seemingly never-ending section of steps, almost has me tumble down in shock.” SEPTEMBER 28, 2014 — “The search is for a gentle beauty that is characteristic of this plateau, but also for muted signs of a landscape in the throes of transition caused by human intervention. These traces of change within the landscape serve as a way to connect with the frontlines of climate change where the environmental crisis underway, like climate change itself, isn’t always easy to see.” SEPTEMBER 3, 2014 — “When you travel in Xinjiang, you see two communities living side-by-side but rarely interacting. Relations between Uighurs and Han Chinese have soured to the point where little dialogue seems possible.” JUNE 13, 2014 — “They bring me in for questioning practically every day. Sometimes the sessions last as long as ten hours. My legs are getting swollen, probably from sitting on a bench without moving for so long.”