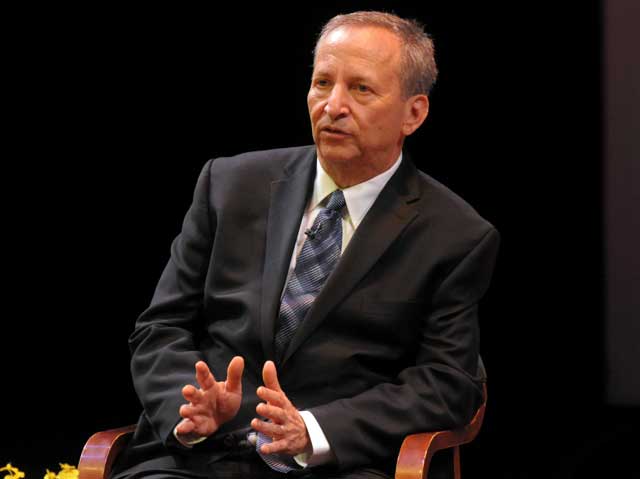 "If we go over the fiscal cliff, medium to long-term... the consequences will be disastrous," said former Secretary of the U.S. Treasury Lawrence H. Summers last night at Asia Society New York. As he explained, the spending cuts and changes in tax laws that are scheduled to go into effect at midnight on December 31 unless the U.S. Congress and the White House reach a deal could send the economy back into a recession and jeopardize national security.

Failure to reach a deal in Washington will have harmful consequences worldwide, too. "The chance that the rest of the world will maintain confidence in us as a seriously governed country will be substantially diminished."

Summers made these and other remarks in a sold-out, wide-ranging discussion on the domestic and worldwide economy with CNBC contributor Karen Finerman.

Summers served as Secretary of the Treasury under President Bill Clinton from 1999 to 2001 and was President of Harvard University from 2001 to 2006. With regard to the latter position, in a lighter moment Summers addressed his depiction in the 2010 Hollywood film The Social Network, which dramatizes the birth of Facebook at Harvard during his tenure — specifically, the scene in which the brothers Cameron and Tyler Winklevoss are shown seeking redress in his office.

Video: "You learn certain things as a college president."

As Summers mentioned early in his talk, his relationship with Asia Society extends back across nearly two decades. Most recently, as Director of the White House Economic Council in 2010, he appeared in a video in which he endorsed the findings of the Asia Society Task Force Report Growing Together Beats Falling Apart: Making Asian Economic Integration Work for Asia, the United States and the World, which recommended a series of steps to combat rising protectionism and economic nationalism that at that time threatened economies worldwide.