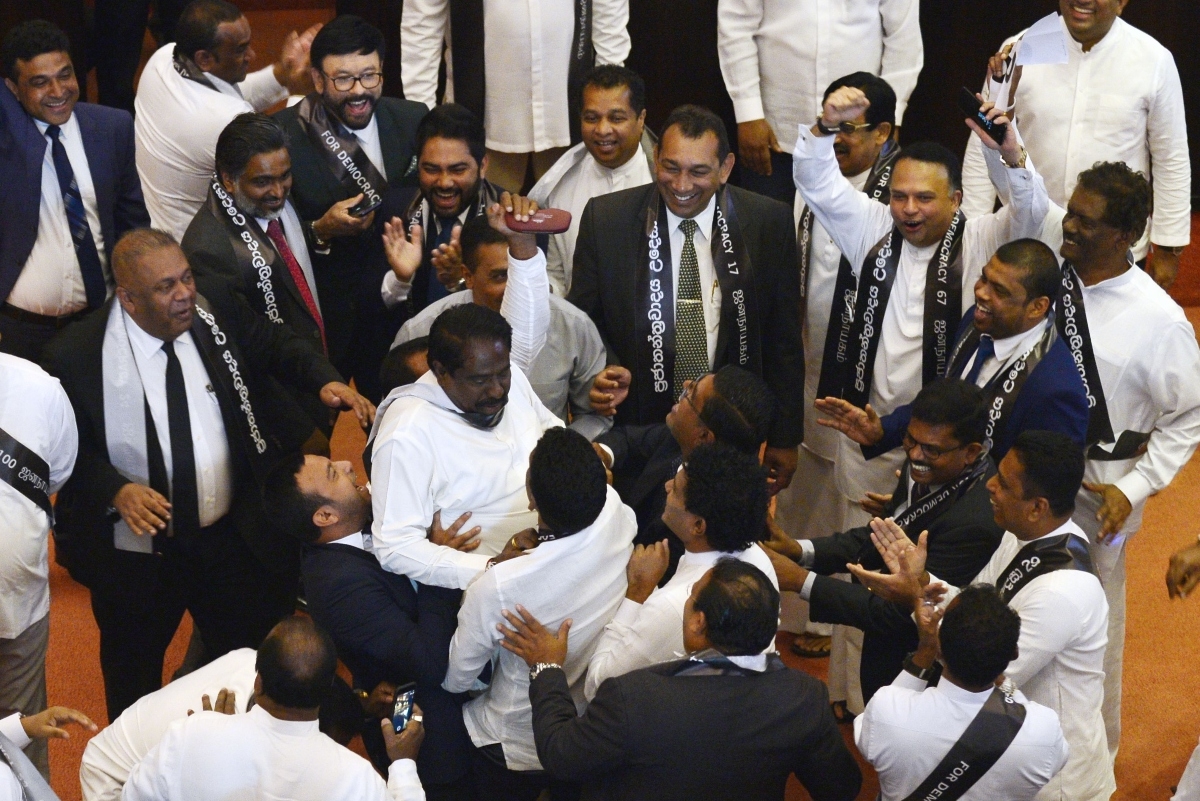 Are zero prime ministers better than two? Sri Lanka is about to find out. After five weeks of dramatic political developments that resemble a dark political thriller, Colombo is currently embroiled in an unprecedented political crisis that has undermined its democracy and thrown the country into disarray.

On October 26, President Maithripala Sirisena sacked Prime Minister Ranil Wickremesinghe, a member of his own governing coalition since 2015, and replaced him with the leader of the opposition — former President Mahinda Rajapaksa — the bitter rival he ran against in 2015.

Shifting rivalries and alliances between these three men have turned Sri Lanka's government into a real-life episode of Game of Thrones. As a struggle for the prime minister's role plays out between Wickremesinghe and Rajapaksa, with Sirisena acting more like a king than a democratically-elected head of state, the country remains in suspended animation — with no prime minister in charge and a government so divided that members of parliament actually came to physical blows.

With protesters swarming the streets, Speaker of Parliament Karu Jayasuriya warned of "a huge bloodbath" if the crisis isn’t swiftly resolved. A prolonged crisis, Jayasuriya cautioned in October, "will set this country back on the international stage and damage our economy." But a month later, there is still no end in sight.

What Started the Crisis?

In Sri Lanka’s 2015 presidential election, Sirisena, who had been a part of Rajapaksa’s cabinet, joined with the opposition to deal the sitting president — who had ruled Sri Lanka for the previous 10 years — a surprising defeat. Rajapaksa’s demise heralded a hopeful moment for Sri Lanka. He had presided over the defeat of the Tamil Tigers in a civil war, but his reign was stained by his consolidation of executive power, numerous human rights abuses, authoritarian governance, and corruption. The new Sirisena-Wickremesinghe coalition promised a much-needed era of reconciliation, democratic reform, and economic development.

This optimistic phase came to a crashing halt on Friday, October 26, when Sirisena fired Wickremesinghe and forged an alliance with Rajapaksa, leading both men to claim to be prime minister. A defiant Wickremesinghe took refuge in the official prime minister’s residence and indicated that he would only leave office if he lost majority support in parliament. In response, Sirisena suspended parliament to give Rajapaksa time to secure support and dissolved the cabinet, allowing Rajapaksa to form a new one that had little credibility.

In the following week, Wickremesinghe, a majority of parliamentarians, and much of the international community called on the president and speaker to reconvene parliament to determine whether Wickremesinghe continued to enjoy majority support. At first, Sirisena agreed — suggesting first that parliament would reconvene on November 5 and again on November 7 — but then changed his mind both times. Given this evidence of Sirisena’s lack of good faith, Jayasuriya declared that the majority of parliament considered the president’s moves "unconstitutional" and that Wickremesinghe was the legitimate prime minister until a parliamentary majority approved Sirisena’s changes.

Despite these efforts, Rajapaksa failed to cobble together enough support in parliament to form a government, losing two no-confidence votes — on November 14 and 16 — in a row. Nevertheless, he and Sirisena have refused to budge. Sirisena maintains he will never accept Wickremesinghe as prime minister — as if his personal whims carry some kind of legal and democratic mandate. Having faced defeat in parliament, Sirisena pushed further into the extra-legal wilderness, dissolving parliament altogether and calling snap elections for January 2019.

The Supreme Court issued an interim order ruling Sirisena’s decision unconstitutional, staving off parliament’s dissolution and putting elections on hold. In addition, on December 3, the Sri Lanka Court of Appeal issued a temporary order preventing Rajapaksa and his cabinet from holding office. Both decisions are being appealed, meaning that for all intents and purposes, Sri Lanka currently has no government.

Sirisena’s actions surprised not only longtime international watchers of Sri Lanka but even members of the political parties involved in the controversy. The collusion between Sirisena and Rajapaksa, in particular, stunned the nation. The development was "not really in the domain of what you would consider being politically possible or feasible," stated Sanjana Hattotuwa, senior researcher at the Sri Lankan think tank Centre for Policy Alternatives. He likened the two men's deal to Donald Trump asking Hillary Clinton to be his vice president after the 2016 U.S. election.

So what led Sirisena into the arms of his bitter rival?

In a speech two days after the coup, Sirisena gave two reasons for his decision to oust Wickremesinghe. Neither stands up to much scrutiny. First, he suggested that a cabinet member was involved in an assassination attempt against him and insinuated that the cabinet was blocking a proper investigation into the matter. Sirisena has yet to produce credible evidence for these charges and his claims are further diluted by his earlier suggestion, which he then denied, that India was also indirectly involved. It is possible that the assassination attempt was simply a story meant to distract from Sirisena’s extra-constitutional act.

Secondly, Sirisena pointed to corruption as the reason for the firing, citing, in particular, a serious and legitimate fraud case involving the central bank and its governor, whom Wickremesinghe appointed. While the controversy brought legitimate criticism onto Wickremesinghe and his party, the PM himself has not been personally implicated. Regardless, alleged corruption is not a constitutionally recognized justification for the removal of the prime minister.

The real reason behind Sirisena’s moves seems to be political. Many analysts, as well as Prime Minister Wickremesinghe himself, have attributed these developments to the president making a deal to secure his own political future. Political scientist and constitutional scholar Jayadeva Uyangoda writes that Sirisena chose this path “in order to resolve a deepening political dispute between himself and Mr. Wickremesinghe.” The coalition government Sirisena formed with Wickremesinghe following the 2015 elections had become brittle.

The country remains in suspended animation — with no prime minister in charge and a government so divided that members of parliament actually came to physical blows.

Division on a range of policy issues grew so stark that tensions between the governing partners started to play out in public. Human rights attorney and an Asia Society Asia 21 Young Leader Bhavani Fonseka points to local elections earlier this year "where we saw [members of] the coalition government taking very different positions, and the president attacking his own coalition partner. Since then, it’s been a very tense coalition."

Given the clear division in the coalition government, Hattotuwa argues that "the most probable explanation" for the coup is that "Sirisena, fearful for his own political future, [saw] this as an option to galvanize whatever is left of the executive presidency and retain that office for himself for as long as possible." Sirisena saw a revamped alliance with the opposition and Rajapaksa as the most likely way to secure power going into the next elections. The fact that Rajapaksa called for snap parliamentary elections in his inaugural statement as new PM last month indicated that both he and Sirisena have their eyes on securing power beyond the current term.

How Has the International Community Responded?

Heightened divisions within Sri Lanka contrast starkly with the international community’s relatively unified reaction to the crisis. Messages being relayed to Colombo from abroad reveal a clear international consensus: Sirisena must respect the constitution and reconvene parliament immediately to determine whether Wickremesinghe retains a democratic majority.

China has taken a different approach. According to Dinusha Panditaratne, the former head of the Lakshman Kadirgamar Institute, a foreign policy think tank in Sri Lanka, "China is officially taking a non-interventionist stance but with indications of support for the new de facto regime. For example, China did not explicitly counter a social media post by Rajapaksa about a visit by the Chinese Ambassador bearing wishes from President Xi Jinping. It is also noteworthy that the few states to have reportedly recognized Rajapaksa include Burundi and Pakistan, both close partner states of China."

India, on the other hand, "was one of the first countries to cite democratic values in commenting on the constitutional crisis, underlining that it is a systemically different partner to non-democratic China," said Panditaratne. India wants to counter Chinese influence in Sri Lanka and is wary of Rajapaksa’s previously cozy relationship with Beijing. However, New Delhi will want to preserve a relationship with the Sri Lankan government no matter who ultimately emerges as the sole prime minister.

It is an open secret that Rajapaksa was and remains close to Beijing. His government oversaw the Chinese construction of the Hambontota Port, a failed project which saddled Sri Lanka with so much debt that the country was forced to hand the port over to Chinese control for 99 years. In the 2015 election campaign, with the opposition criticizing Chinese influence, Chinese money flowed into Rajapaksa’s campaign, making it plain who Beijing wanted in power. Rajapaksa’s subsequent defeat was therefore seen as a major setback for China as well.

"Sri Lanka’s fragile process of democratic recovery is in peril."

However, China remained unperturbed, cozying up to Sirisena, despite his campaign criticism, by offering investments and gifts, including the construction of a hospital in Sirisena’s home constituency of Polonnaruwa. Its strategy seems to be working. India’s development projects in Sri Lanka, which were supported by Wickremesinghe, started to experience delays. In fact, Indian Prime Minister Narendra Modi’s frustration about these delays led to one of the final public spats between Wickremesinghe and Sirisena before the crisis began.

Now, with Rajapaksa back on the political scene in a major way, China once again has multiple powerful friends in Colombo. If the crisis continues and if Wickremesinghe is illegitimately forced out, it will be worth watching how the international community, especially India and China, navigate the aftermath.

What Does This Mean for Sri Lanka’s Democratic Future?

How will Asia’s oldest democracy survive the coup and this attack on its constitution? There is room yet for more twists and turns. Whatever happens, political scientist and constitutional scholar Jayadeva Uyangoda believes that "Sri Lanka’s fragile process of democratic recovery is in peril."

The best case scenario for Sri Lanka would be Sirisena accepting the Supreme Court’s ruling and allowing parliament to determine the prime minister. However, Sirisena and Rajapaksa have shown no inclination toward accepting that fate and may well decide to plow ahead with even more extra-legal mechanisms, even in the face of domestic and international opprobrium. The security apparatus, which is generally fond of Rajapaksa and is under Sirisena’s direct control, could come into play. If they move forward with an illegal election in January — one that Rajapaksa could well win — it would stain Sri Lanka’s democratic fabric for good.

If Wickremesinghe is eventually ousted as prime minister — even via a vote in parliament — the past month has set a problematic precedent for democratic rule and Sri Lanka’s constitution. Hattotuwa believes that "we have crossed the Rubicon, where the great danger and tragedy is that it is now normalized that the constitution is optional."

If Sirisena and Rajapaksa get their way, it will be fascinating to witness how long their own alliance lasts. The impact of such a new regime on Sri Lanka’s policy approach is equally uncertain, with a danger that the country will slide backward in several key areas — democratic reform, transitional justice, ethnic reconciliation and more. Fonseka expresses concern that "the reign of terror we saw during Rajapaksa’s period will return. The safeguards, the checks and balances may all be dispensed with."

How will this episode shape Sri Lanka’s democracy? Uyangoda offers the most sobering picture, writing that "Sri Lanka has entered a hugely uncertain phase of its post-civil war politics." He believes that the dramatic events from the past month will only buttress the political cynicism and disillusionment of Sri Lanka’s citizens, with "another phase of radical alienation of the youth from politicians, political institutions, and the easily abused democratic processes."

It seems that however this unconstitutional crisis is resolved, Sri Lanka loses.