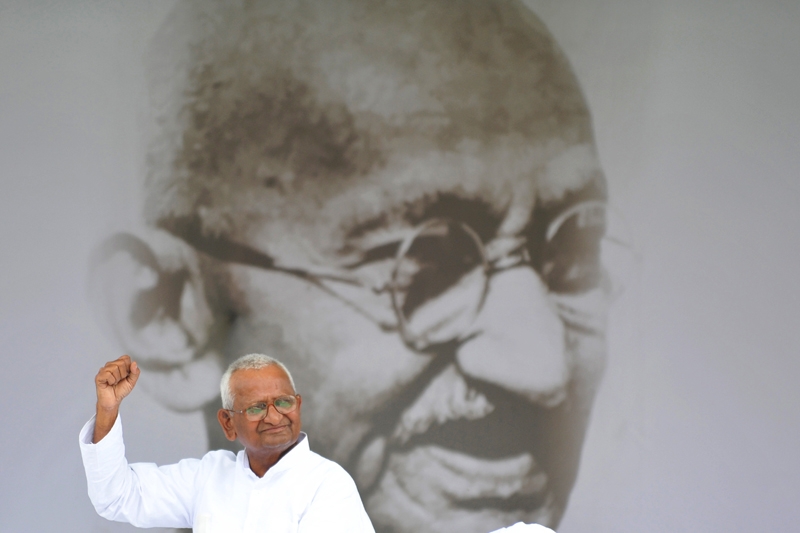 Hit by a series of nonstop corruption scandals, each more spectacular than the last, India's citizenry has rallied across the country in support of Anna Hazare, a Gandhian activist who is using the Mahatma's political tactics to push for a strong anti-corruption bill.

India’s government seems at a loss over how to rein in Hazare — arresting him, then releasing him, then being faced with Hazare's refusal to leave jail until more of his demands were met.

Hazare is a savvy strategist. His public protest fast is tailor-made for India's burgeoning television news media, and as his movement has grown, so has the list of notable public figures and celebrities that have given him support.

Corruption not only makes the lives of ordinary citizens a struggle to secure the most mundane public services, it is costing India's economy billions of dollars and threatens to derail the emerging giant's strong economic growth.

But Hazare's calling into question the legitimacy of India's parliament to deal with what everyone acknowledges is a runaway problem and his call for public investigations of officials, up to and including senior judges and the prime minister, have been met with skepticism.

Hazare has been compared to Mahatma Gandhi, but the comparison is flawed. Still, his simple homespun white cotton garments and Nehru cap recall the legendary figures who fought for India's independence — Gandhi, Nehru and Sardar Patel — and who represent for India's electorate a generation of politicians who put country well above personal gain, something it sees little evidence of in the current lot.

While it remains to be seen whether or not Hazare's movement will result in systemic reform of India's defective governance, India's great experiment with democracy has entered a new era, one in which the normally "silent minority" of the country's emerging middle class may finally be inspired to wade into the political muck dominated by cronyism and corruption and craft it into a machinery of state commensurate with the country's ambitions and its economic dynamism.

Mira Kamdar, a Senior Fellow of the World Policy Institute, is an Asia Society Associate Fellow and the author of Planet India: The Turbulent Rise of the Largest Democracy and the Future of Our World.

Mira Kamdar is a Paris-based Senior Fellow at the World Policy Institute in New York and an Asia Society Associate Fellow.
@mirakamdar