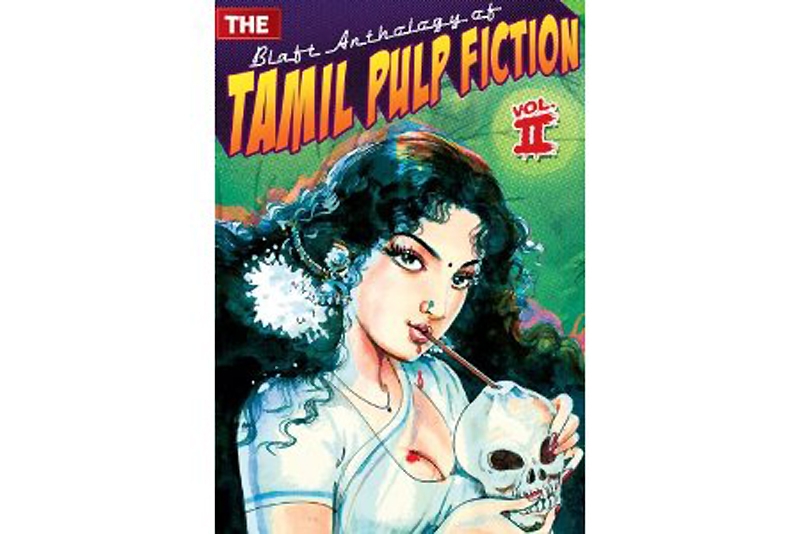 "A bloodline of debauched maharajas falls prey to AN EVIL CURSE!"

"A beautiful girl uses karate to retrieve A STOLEN IDOL!"

"A patient in an insane asylum uses her supernatural powers...TO KILL!"

Is this how you think of Indian fiction? If you're like most English-speaking readers, probably not—which means you've been missing out on the weird and wonderful world of Tamil-language pulp fiction, where stories have titles like "Hold on a Minute, I'm in the Middle of a Murder" and "The Hidden Hoard in the Cryptic Chamber."

But thanks to the Chennai-based Blaft Publications, this racier side of South Asian pop culture is now starting to cross over. Blaft's first anthology of translated Tamil pulp appeared in 2008, and was such an immediate hit that a follow-up volume is hot off the press — featuring "7 THRILLING tales... from 7 Indian and Singaporean masters of ACTION, SUSPENSE, and HORROR!"

The genre may be little known to non-Tamils, but, as Sandip Roy writes on NPR.org, "Indian pulps have been around since the early 20th century. They borrowed freely from American dime novels and British penny dreadfuls. But because this is India, there are also kings, ghosts, and mythological serpents."

Delving further, Outlook India's Mukul Kesavan explains that several decades ago a peculiar dichotomy arose in Indian publishing whereby respectable literary fiction came more and more to be written in English (and thus found an international audience), while genre fiction was produced in indigenous languages, and stayed there... at least until Blaft came along!