Podcast: Salima Hashmi: In the Worst of Times, the Alchemy of Art | Asia Society Skip to main content

Podcast: Salima Hashmi: In the Worst of Times, the Alchemy of Art 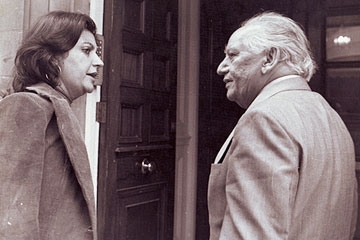 This is the latest installment of a series of podcasts entitled Another Pakistan, a co-production of the Asia Society and the Watson Institute at Brown University, with support on the ground from Aman ki Asha. Click here to learn more. Scroll to the end of this post to listen to the podcast.

LAHORE — Salima Hashmi is the vital link between Pakistan's greatest poet, Faiz Ahmed Faiz (1911 – 1984), who was her father, and a "resilience" that you'd feel in the air even if Pakistanis weren't invoking it so urgently and so often. You'd be aware of an edgy, "on" air of pleasure in life — very particularly this life of everyday risk and uncertainty — underlying a typical conversation in Lahore; an almost reckless intensity that I've heard young Pakistanis in America say they miss. You can hear it, I'm pretty sure, in Salima Hashmi's linking of the Beaconhouse arts university she founded in Lahore seven years ago and the poetic vision of her father.

Faiz is remembered (and celebrated in many languages and far corners of the world on the eve of his centennial year) as an iconoclast and oppositionist, but equally for his own serenity and gentleness. He was a communist who liked to say that "the Sufi saints are the real comrades." He asked to speak, he daughter says, for "the weaker voice" in the square, for religious minorities and the unorthodox, as in his prayer:

Salima Hashmi is well known as a television comedienne, but equally for her public protests against nuclear testing in Pakistan as in India. These days she paints, she writes, and she oversees the teaching of art and design — all with a certain imperturbable enthusiasm.

It’s odd that the worse things are, the better the art becomes. I suppose that is also something noticeable elsewhere. We are told that in very difficult times of war, the human spirit or the resilience of creative people is challenged and comes to the fore. That's happening here too. I curated this show of contemporary art at the Asia Society museum two years ago in New York and people were talking about how unusual the work was, how vibrant it was, how vigorous it was… there were 15 artists in the show and I said I could have brought 50, because that's how many I can look upon and say they're doing something rooted and yet it takes into fact the very difficult conditions that they work in. And their work is important to them. Sometimes they get an audience and sometimes they don't. Very often their economic situation is precarious, but they manage: some of them teach in schools, in colleges, some of them have galleries who can market their work — not always — and occasionally they'll get a showing in Fukuoka or Delhi, New York or San Francisco, that will tide them over for a while.

After we'd said our thank-yous, she added: "Please take back the message from Pakistan to friends everywhere that we live a life which is a hard life, but it is still full of hope and we are maybe not the people you see painted and dehumanized every day in the media. We're really okay and we have fun and make nice paintings, and we sing wonderful songs, and we make poetry… In the worst of times in Pakistan, there is always a joke, dark humor and irony… We all have feet of clay. And the emperor never has any clothes on."