Podcast: Mohsin Hamid on a 'Pakistan-like' Trend in America 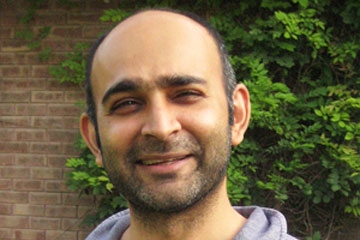 LAHORE — Mohsin Hamid wrote the hair-raising novel The Reluctant Fundamentalist, which will soon be a major motion picture directed by Mira Nair of Monsoon Wedding fame. The character in the title is a young Pakistani with a resumé a lot like Mohsin Hamid's in America: he was a star on the Princeton campus, a cinch in the US business world. But 9/11 spins the fictional hero 180 degrees. Watching the Twin Towers burn up on television, he is intrigued to find himself smiling spontaneously at the symbolism of "this powerful country being humbled, slapped, paid back." He decides after all that he'd been enlisted in a failing empire as it enters a tailspin of "crippling nostalgia" and self-pity. So the character, called Changez, soon comes to replant himself in native soil and political resistance.

Both Mohsin Hamid and his invention Changez have inhabited the American scene at its "best and brightest," most competitive, most self-regarding pinnacle — and then left it all, without remorse. What was it for Changez, I am asking, or even for Mohsin Hamid himself, that isn't working in the American elite?

What shocks me about America, about the way America is headed, is that in some ways it's becoming increasingly Pakistan-like — in the sense that the American elite is becoming much, much richer compared to the rest of the population; and America's great success, which was this enormous middle that had the bulk of political power, the bulk of economic resources, and the rest, is being crushed. This America where there were relatively high tax rates and there was a notion of shared service in the form of military service, for example — the draft in its way is a deeply socialistic notion, yet America bore that for decades; and in this time built up a system of very good public high schools and primary schools and very good infrastructure and excellent colleges, and you could see this evolution where every generation was better off than the previous.

In my time in elite America, in the course of the last decade and a half, what I was struck by was how that system was basically collapsing. Friends of mine are earning insane amounts of money — those who stayed in the hedge fund world. Oftentimes it's unclear what they're actually contributing to society. And meanwhile the school system is collapsing, and the American middle class is being eviscerated. And all of this being done on the back of a certain demagogic tribalism. Here in Pakistan we've seen many of the same sorts of things — this combination of xenophobia, unwillingness to pay taxes, comfort with a powerful and entrenched elite that coopts the democratic process. I mean, that's what we have here, and it isn't great!

I felt very comfortable in elite American circles because the same notions of hierarchy, of how an elite functions, were very easy for me as a Pakistani to understand. Some of my American friends when we first started out had more difficulty dealing with the corporate context than I did, because in Pakistan you learn very early, from infancy, how hierarchy works, and how you modulate the way you deal with people based on their relationship in the hierarchy — with somebody a bit older than you, a wealthy person, a poor person, a family elder, a this or that. And I think that is much better preparation for an American corporate elite social milieu than a liberal arts education which teaches you that everybody's equal and you call everybody by their first names and just hang out… Underneath all that are millions of gradations of hierarchy which exist in American society, just as in Pakistani society. Except here the elite embraces that, uses it to oppress everybody and says: that is the expectation. In America the pretense is: it doesn't exist, which makes it maybe even more effective, because people don't see it.