Podcast: Mohammed Hanif and the Explosive Case of Karachi 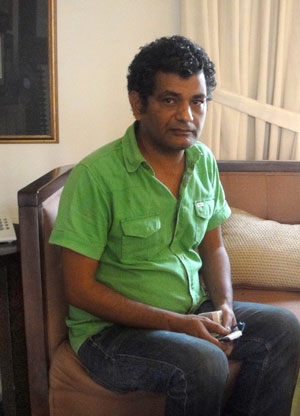 This is the first in a series of podcasts entitled Another Pakistan, a co-production of the Asia Society and the Watson Institute. Click here to learn more. Scroll to the end of this post to listen to the podcast.

KARACHI — Mohammed Hanif, prize-winning novelist of A Case of Exploding Mangoes (2008), is piercing a cloud of calamity and crisis that hangs over his city, Karachi, as we speak.

The news headline as we arrived was “Karachi Continues to Burn and Bleed.” More than 80 people have died in “target killings” and street fights in our first five days here; more than 300 in the month of July. Yet in our comfortable precinct where machine guns are at the ready outside every coffee shop and store, the turf war among Karachi’s refugees (oldtimers from India, relative newcomers from Afghanistan and Pakistan’s tribal areas) can get lightly dismissed. “If 80 people were killed in the Bronx,” I was asked, “would anybody say ‘New York is burning’?” Yes, I replied, somebody might.

Twenty-five years ago when Mohammed Hanif came to the big city from the Punjab, the graffiti in the loo warned migrants like him: “Go back to your villages or your sisters and mothers will be screwed, so to speak.” Over which, he remembers, a Punjabi scrawled, “we’ve come back to avenge them.” That was street banter then, but it has become the code of life after the long flood of handguns, heroin, and many more refugees pouring out of the war zones, down the Indus River valley. I venture that it’s as if New York City were awash in refugees from a 30-year air war on the Adirondacks. Karachi’s population was less than 500,000 when the British decamped in 1947. It was 5-million when the Afghan wars began in the late 1970s. It’s approaching 20-million today. These modern megacities do not spring up naturally, and this one is not pretty. Mohammed Hanif has spent time with the young Pashtuns who drag magnets over the dirt streets of Karachi, dredging for metal.

There are thousands of them — according to one estimate there are at least sixty thousand just in Karachi. Most people, especially people from the posh areas, would think that they are either beggars or they are drug addicts. But I’ve talked to most of them: they are not drug addicts, and they are not beggars. They are, basically, workers. That’s the only work that they can find in the city, because of overpopulation. So, from morning until evening, they go around collecting rubbish and selling it. And they make, on a good day, 150 rupees [less than two dollars]. I used to see that mostly they were either teenagers or kids. In the last couple of years, increasingly it’s grown men, even elderly men. These are people who improvise on a daily basis to make a living in this city.

Mohammed Hanif is the pride of literary Pakistan these days, but he is warning us that the arts and liberated media in Pakistan all live in something of a bubble. FM-radio and pop culture thrive on mainstream commerce, soft-drink and cellphone advertising, and the new tech conveys an air of freedom to say what you want. But it gets proven with gruesome regularity that real limits on speech will be enforced by assassation — of Punjab Governor Salman Taseer (by his bodyguard) in January for resisting the fundamentalists’ anti-blasphemy law; of the investigative journalist Saleem Shahzad late in May for nailing the joint enterprises among Al Qaeda, the Taliban and the Pakistan Army; of Saba Dashtyari, a scholar of Islam, in June, for supporting separatism in Balochistan. “The media is noisy and boisterous,” Hanif is telling me, “but it knows its limits… Within minutes of Taseer’s murder, TV presenters were giving the justification for it.” While we’ve been in Pakistan, the US government has pronounced the Saleem Shahzad murder a “barbaric” act of the Army’s Inter-Services Intelligence, the unanswerable ISI. “Everyone believes,” says Mohammed Hanif, “including liberal journalists, that when America criticizes the ISI, they’re not concerned about journalists; they’re concerned that the ISI is not doing their bidding. So that complicates the problem…”

A one-time air force pilot and scrupulous student of the thirty-year war in, through and around Pakistan, Mohammed Hanif has concluded that “this country will not see peace unless America learns to disengage itself, and do what it’s good at: making Pirates of the Caribbean — Ten, or whatever the world loves them for.”

So what might American friends and Open Source listeners do for Pakistan in the near term? “I think: stay home,” Mohammed Hanif suggests. And if we must do something, read Graham Greene’s uncanny prophecy in 1955 of the path from “innocence” to disaster in Vietnam, The Quiet American.