Podcast: Imtiaz Alam: So You Want to Be a Journalist in Pakistan… | Asia Society Skip to main content

Podcast: Imtiaz Alam: So You Want to Be a Journalist in Pakistan… 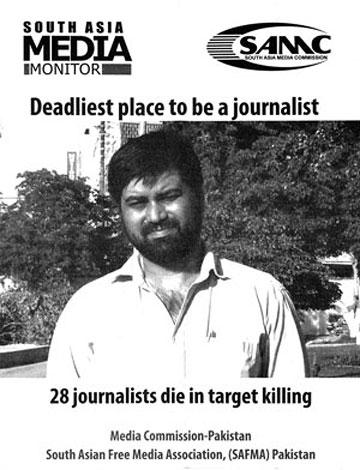 Imtiaz Alam has the gruff manner of your classic, chain-smoking, get-to-the-point Front Page news editor. He seems a Chicago sort of newspaper guy, except that he works and represents the profession in Pakistan, “the deadliest place in the world to be a journalist,” as all now agree.

First point in our conversation is to register some constructive horror at the murder last May of Saleem Shahzad — a reporter of Sy Hersh’s or David Halberstam's hyper-adrenal zeal for the ugly facts. As Dexter Filkins details in the September 19, 2011 New Yorker, Saleem Shahzad had pushed his many cloaked sources in Al Qaeda, the Taliban and the Pakistan Army and the CIA to establish the working (but deniable) links among the official and opposition gangs. For telling the story in Asia Times Online after he was warned off it by Army Intelligence, Shahzad was tortured, killed and dumped in a farm ditch. His was the 28th "target killing" of a Pakistani journalist in the last five years — the first to be investigated seriously. None has been prosecuted, and nobody’s betting that Shahzad's killer will be.

But it's time, Alam is saying, to write a few ground rules of news reporting on the rough crossfire of Pakistan. For example: journalists should get risk and life insurance from their employers and the government; the Army and its media handlers should lay out its practice of "embedding" and often paying reporters; "all cases of the target killings of journalists should be investigated and the culprits brought to justice."

Alam is also giving us one rough-and-ready newspaper man's take on Pakistan in general: "a horrifyingly difficult situation,' he says. "We are sitting on a big bomb, and it's ticking." The extremists are not the majority or even the mainstream, but they are powerfully organized, and there's been no leader around since Benazir Bhutto to say no to them."

Alam admits a certain nostalgia for British rule, which he is not old enough to have experienced. "They learned about our culture, our ethos… they are to blame for divide-and-rule — typical colonial methods. But they brought good things" — railroads, law, the liberal constitutional tradition. Even now, he says with a guffaw, "the Americans should hand over the job to the Britishers." The problem with you Americans, he says, is not just inattention and tactlessness. It's that the US armed the Taliban in the first place, to fight the Soviets in Afghanistan in the 1980s.

"That was the original sin. You made these people… your president even brought them to the White House — so disappointing! — and compared them to the founders of your country… So now when they turn their guns against Washington, you are saying they're terrorists. I considered them terrorists then, and I consider them terrorists now."

The US handed Pakistan a bigger problem than Pakistan can handle, he is saying. My question: But can the US undo the damage. His answer: "The Urdu couplet says: You gave the pain, you find the medicine."