Not Your Father's Confucius | Asia Society Skip to main content

Not Your Father's Confucius 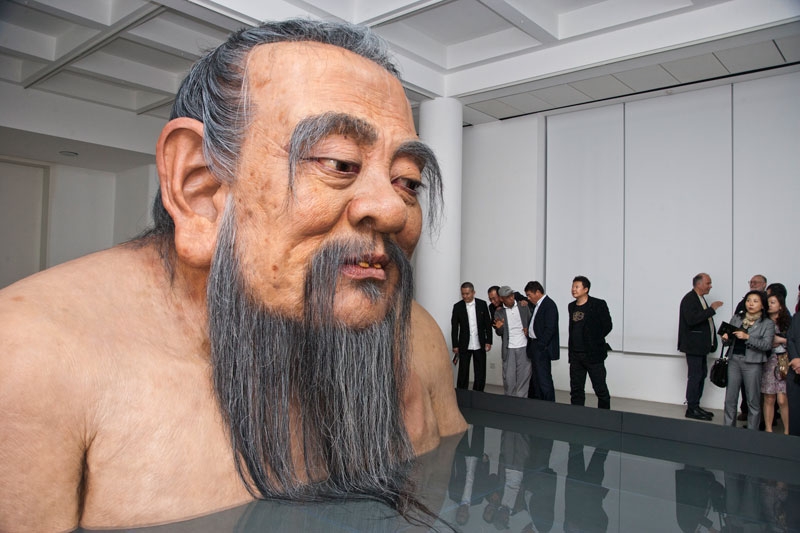 For the better part of two millennia, Confucius and his ideas of social harmony and responsibility have been venerated throughout China, Japan, Korea, and Vietnam. As these countries confronted the challenges of modernity in the 20th century, however, people began to look critically at the legacy of the sage from Lu. Over the last century or so, particularly in mainland China, his school of thought and its legacy have been attached to everything from backwardness and feudalism to misogyny, corruption in government, and even the inability of China to develop a scientific tradition before the West.

A new exhibition at the Rockbund Art Museum in Shanghai by controversial artist Zhang Huan entitled Q Confucius is perhaps indicative of a new direction in attitudes toward the great sage. In the wake of China’s branding of its language and cultural institutes with the “Confucius” tag (we here at Asia Society have our own Confucius Classroom Network), it is clear that this reevaluation of the tradition exists at many levels. As people in China begin to consider the past, present, and future of their society, some are increasingly coming to see the Communist period after 1949 as the equivalent of a brief interruption to the dynastic flow of a 4,000-year-long timeline of cultural history and achievement. Rather than attacking the Confucian past, many are rediscovering its relevance and value, along with the two other great traditions that have defined Chinese intellectual history, Daoism and Buddhism.

I still remember a long conversation with a friend in Shanghai about the reasons why he loves Korean TV dramas, for a number of years all the rage in China, Japan, and Southeast Asia. His list of reasons boiled down to an admiration for the ways in which these dramas reflected the persistence of Confucian values in contemporary Korean society, and a lament that modern Shanghai had become an affront to those values and a sign that China had now wholeheartedly embraced the shallow materialism and hedonistic consumerism of the West.  While my friend's parents probably grew up with stories of the oppressiveness of Confucianism, he was looking back to a time in China when "benevolence," "righteousness," and "propriety" — (ren 仁, yi 义, and li 礼) three key Confucian virtues — were the order of the day. After all, nothing makes an idea more alluring than denigration by one's parents.

Of course, Confucius himself did not begin life as a venerable sage. His early years were fraught with difficulty and sacrifice, and what became a lifelong quest to gain acceptance for his ideals and principles. He was portrayed as physically unattractive and simply dressed, a manifestation perhaps of the lack of recognition for his talents and insights that characterized his early life. It’s no wonder then that Zhang’s sculpture of Confucius — consistent with many traditional portraits — casts the great thinker as physically awkward and ugly, the outward appearance clearly not indicative of the wisdom and sagacity within. The earliest biography of the founding father of Confucianism appears in the account of the Han dynasty historian Sima Qian, who claims a venerable ancestry for him; more recent scholarship, however, has suggested a closer connection between his family and “barbarian” or non-Chinese states of ancient China, and emphasized the radicalism of his thought for its time.

During the Cultural Revolution, statues of the man and temples dedicated to his name were smashed as anachronisms of the old system of social hierarchies. The writer Lu Xun famously began his literary career with a 1918 story called A Madman’s Diary in which the narrator sees the words "eat people" appearing between the lines of ancient Confucian texts — in this context, the legacy of Confucianism is a society in which people exploit, and in the story, literally “eat” each other. The recent appearance and subsequent disappearance shortly thereafter of a bronze statue of Confucius in Tiananmen Square certainly seems to suggest the contested nature of the image of Confucius in China today.

While most contemporary images and portraits of Confucius have given him a bit of a makeover, earlier visual portrayals included the uneven, protruding teeth of Zhang’s new piece. Perhaps the well-groomed and erudite official portrait of China’s great sage is now giving way to an earlier, earthier, more authentic Confucius? The buck teeth and uneven smile of this new image in Shanghai harken back to his status as the original Chinese outsider.