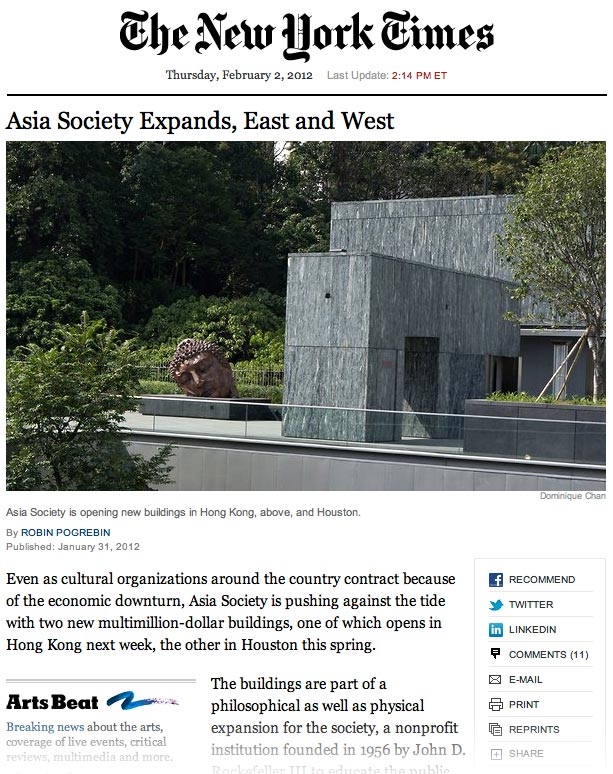 This week, The New York Times announced to the world Asia Society's grand expansion plans in Hong Kong and Houston.

"Even as cultural organizations around the country contract because of the economic downturn," Robin Pogrebin wrote, "Asia Society is pushing against the tide with two new multimillion-dollar buildings." Asia Society Hong Kong opens its doors next week, while Asia Society Texas takes its bow in April. Pogrebin continued:

The Hong Kong project is in a 19th-century former factory that was used by the British military to produce and store explosives and munitions. The architects are Tod Williams and Billie Tsien, who designed the American Folk Art Museum’s former home on West 53rd Street in Manhattan and the new Barnes Foundation being built in Philadelphia.

The Houston center, in the city’s museum district, was designed by Yoshio Taniguchi, who was responsible for the renovation of the Museum of Modern Art. The Korean artist Lee Ufan has been commissioned to produce a site-specific work to inaugurate the sculpture garden there. ...

Each center has art galleries, lecture halls, meeting spaces and offices. Both are opening with exhibitions that pay tribute to Asia Society’s founding with selections of traditional Asian art from its permanent collection. (The society started a contemporary collection in 2007.)

The Times story, the print version of which you can download in PDF form here,  notes that in a time of global economic decline, Asia Society's expansion shows that interacting with Asia is no longer simply a politically correct pleasantry, but a necessity:

“We’re going from Pax Americana to possibly Pax Pacifica,” [Asia Society President Vishakha Desai said]. “This is a century when America will be a very important player, but not the player. There is a different balance of power in the world.”

Because the world has changed, so has Asia Society’s mission. Where once the organization was focused on explaining Asia to Americans, now it emphasizes strengthening partnerships in areas like culture, business, public policy and education, not only between Asians and Americans but among Asians themselves.

“We have to think about how we relate to Asians as partners,” Ms. Desai said. “The fastest-growing trade is intra-Asia trade, yet there isn’t an Asian community. People don’t know each other well because for the last 250 years, everybody looked to the West.”

In addition to the piece in the Times, which appeared in print today, Asia Society's Hong Kong and Houston expansion has attracted considerable media attention elsewhere. Here's a rundown:

What do you think Asia Society's new homes in Hong Kong and Houston? Share your thoughts in the comments below.