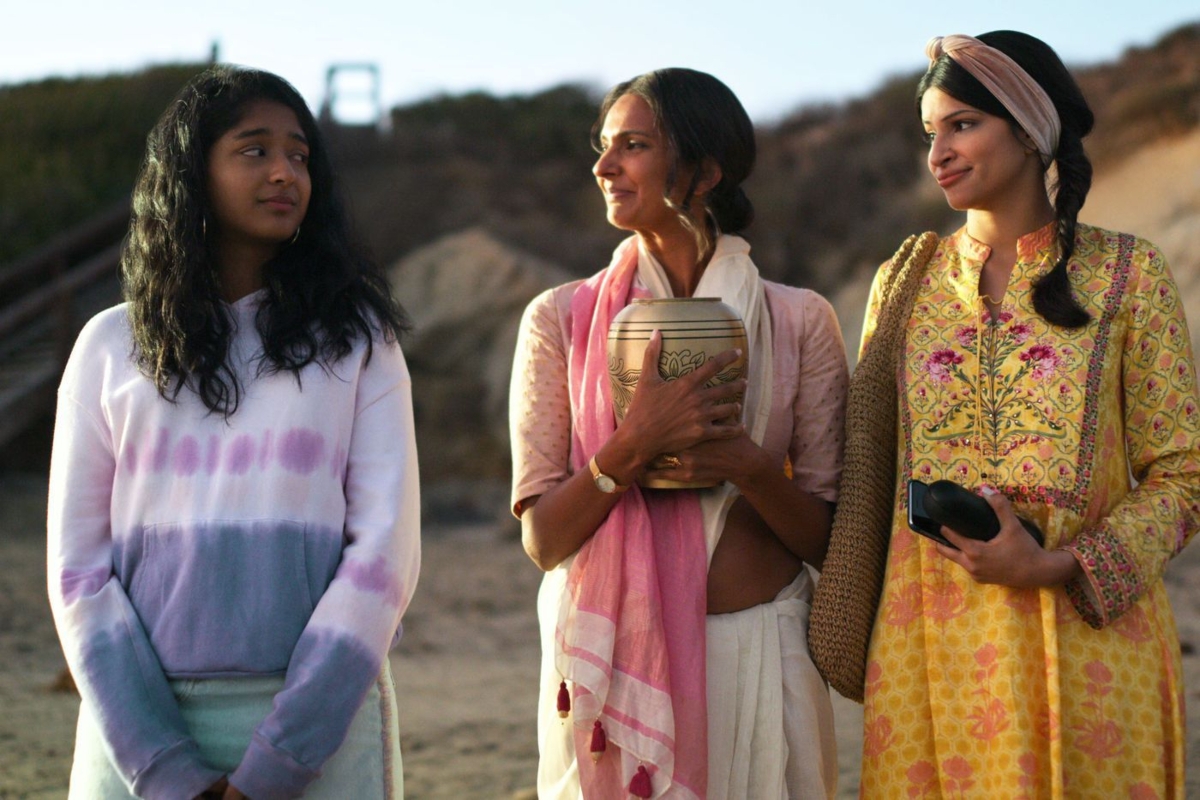 Maitreyi Ramakrishnan (L), Poorna Jagannathan (C), and Richa Moorjani (R) in a scene from the Netflix comedy Never Have I Ever. (Courtesy of Netflix)

If you've owned a television set in the last decade, there's a very good chance you've encountered Poorna Jagannathan. Since starring in the 2011 Bollywood classic Delhi Belly, the Tunisia-born actress has won praise for her performances in a number of acclaimed shows, including Big Little Lies, Better Call Saul, and The Night Of, where she portrayed an immigrant mother whose life is torn apart after her son is falsely accused of murder.

Jagannathan can currently be seen in the Apple TV+ drama Defending Jacob as well as the new Netflix comedy Never Have I Ever, where she plays Nalini Vishwakumar, a widowed woman from India raising her 15-year-old daughter, Devi, in a California suburb. In an assessment of the show, the critic Sonia Saraiya wrote in Vanity Fair that she's "seen a lot of actors attempt to flesh out the stereotypically demanding Indian mom, but I’ve never seen anyone do it as well as Jagannathan does."

Jagannathan recently spoke with Asia Blog about her current projects, what she looks for when considering a role, and her work as an advocate for gender equality in India.

What do you look for when you consider a new project? Is there an underlying thread between the various characters you play?

Definitely good writing. I like to portray roles where the writing does the heavy lifting and then acting feels effortless. The emotion behind a scene or the humor just flies off the page, without you having to work at making it work.

What attracted you to the role of Nalini Vishnakumar? How much do you identify with her? How are you and her different?

There’s a lot about my character that I relate to. My son is 13 and close in age to Devi, who is 15. So you’ll actually see some ways I parent on screen. Especially the shouting parts! But Nalini is a lot more traditional and strict than I am; she's someone who holds her emotions in, which I don’t. What really drew me to the character is the writing. She’s a richly written, nuanced character. And as an actor, you’re only as good as the writing. Nalini gave me the opportunity to portray an immigrant woman’s journey and explore one of the most universally fraught relationships: that of mother and daughter.

I actually say “no” to a lot of roles that have immigrant Indian women in them, because they are usually portrayed as caricatures: submissive and preoccupied with getting their children married off. Their own stories are hugely subsumed by these tropes. But in this show, I got to play a single mother, who is in grief, dealing with the loss of her beloved husband. She is an immigrant awkwardly straddling two cultures and raising a daughter who is out of control. This show is targeted to young adults, but it contains very adult themes: that of isolation and tremendous loss.

There were scenes that were so emotionally hard to shoot, like the scene with the lovely Sendhil Ramamurthy, who plays my husband where he’s consoling me after a miscarriage. Or the last episode where we are throwing his ashes into the sea. At a time in America where immigrants are seen as the enemy, shows like this and Netflix’s Gentefied go a long way in shifting perception and creating empathy.

At a time in America where immigrants are seen as the enemy, shows like this and Netflix’s Gentefied go a long way in shifting perception and creating empathy.

What struck me when watching Never Have I Ever is that the show resists shopworn archetypes for Devi and her friends — the teenagers are presented with more nuance than we're accustomed to seeing. What insight did portraying Nalini give you into the lives of high schoolers today? How are they different from previous generations?

We’re so used to seeing the life of white teenagers documented on screen. We’ve grown up knowing about their struggles, their headspace, and their internal life, endlessly portrayed in movie after movie. And not that teens of color grapple with totally different things — being a teenager is somewhat a universal thing. But it’s refreshing to see a show with teenagers of color have to add their race and culture into the mix, on top of everything else. The notion of belonging is really important as a teen and is definitely heightened when it comes to teens of color. 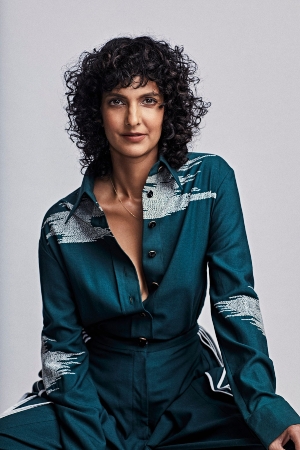 In addition to Never Have I Ever, you’re also starring in a show on Apple TV+ called Defending Jacob. What was that experience like? And how does it feel to be involved with two projects airing at the same time that are so different in their tone and stories?

I had a wonderful time shooting Defending Jacob. I have huge respect for Mark Bomback, the writer. And I really love how that show turned out. I was floored by the acting on set: Chris Evans, Michelle Dockery, Jaedyn Martell, and Cherry Jones will blow you away. Their acting is so moment-to-moment and steeped in realism. Again, Jaedyn — like [Never Have I Ever star Maitreyi Ramakrishnan] — is so young and is able to carry a show effortlessly.

You’ve been an outspoken advocate for gender equality in India, particularly in the wake of a notorious gang rape and murder in Delhi in 2012. To what extent have gender relations in the country changed since then?

We’ve become more aware of the epidemic of sexual violence. We have become more vocal about it. We are using the right language to describe it. Sexual assault used to be called “molesting” by some, and that’s really not what it is. But we have such a long way to go. Victim blaming and shaming is still the go-to mechanism. And as the recent “BoisLockerRoom” incident shows, teaching young boys about consent and respect is where the work needs to be done. And there really hasn’t been much progress in that space.