Listen: Why China Thinks the US Isn't Neutral in the South China Sea | Asia Society Skip to main content

Listen: Why China Thinks the US Isn't Neutral in the South China Sea 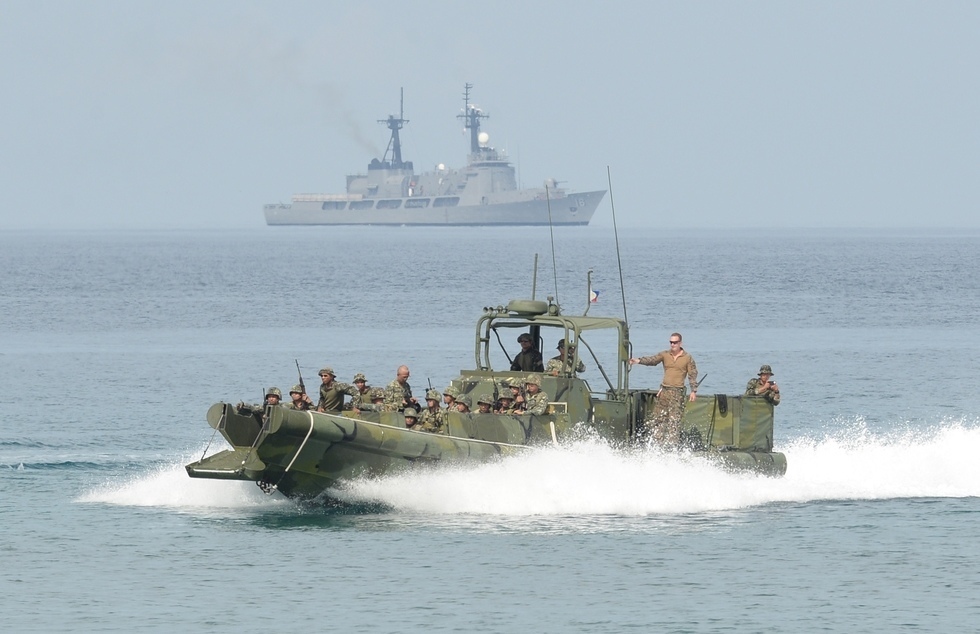 Philippine and U.S. marines ride on a boat as they prepare to land on a beach facing the South China Sea during a beach assault exercises in San Antonio town, Zambales province on May 9, 2014. Scores of U.S. and Filipino marines launched mock assaults on a South China Sea beach in the Philippines on May 9 in war games aimed at honing the allies’ combat skills. (Ted Aljibe/AFP/Getty Images)

For the Asia Society Policy Institute’s (ASPI) AsiaConnect briefing on May 14, 2014, Wu Xinbo, Director of the Center for American Studies at Fudan University, discussed the disputes in the East China Sea and South China Sea, President Obama’s recent trip to Asia, and the state of U.S.-China relations. Dr. Wu is Professor and Executive Dean of the Institute of International Studies at Fudan University. He teaches and researches China’s foreign and security policy, Sino-U.S. relations, and U.S. Asia-Pacific policy. Dr. Wu is the author of four books on China-U.S. relations and has published numerous articles and book chapters. This blog post presents a condensed, edited version of his remarks, along with an audio recording of the conversation.

Your recent New York Times op-ed urged the U.S. to stay out of the East China Sea dispute. How do you see their position on that issue, as well as the dispute over the South China Sea?

Regarding the East China Sea, the U.S. administration reaffirmed its commitment to its alliance with Japan, and President Obama urged both sides to avoid provocative actions and words. I believe President Obama also clarified the U.S. position on the issue, which is to prevent military conflict.

The South China Sea situation is different. The new security cooperation agreement with the Philippines implies that the U.S. will have a more active military presence in the region. I think Vietnam and the Philippines both feel emboldened by this. Frankly speaking, I think the U.S. wants to constrain China’s activities in the South China Sea in order to maintain its own dominant position in the region.

The situation there is quite complicated. China historically claimed its right to the South China Sea with its rhetoric, because it didn’t have the capability to implement those claims. Today, it does have the resources to back up its claims. I’m not optimistic about how the situation will develop.

How do you think the U.S. should continue to engage in the dispute?

When Secretary of State John Kerry spoke with Chinese Foreign Minister Wang Yi on Tuesday, he reportedly said that the U.S. does not take sides or take positions on the South China Sea situation. But the U.S. does take sides; it has security cooperation agreements with Vietnam and the Philippines.

It’s important to recognize that the U.S.’s Asia-Pacific strategy had never been shaped by the South China Sea issue until recently. The U.S. should acknowledge that China’s maritime claims have a historic basis, and should encourage China to further clarify its claims. And it should continue urging all sides to pursue diplomacy and resolve the dispute peacefully, rather than with military means.

What is your assessment of President Obama’s recent trip to Asia?

President Obama visited Asia in a relatively weak position, with a low approval rating at home and the Ukraine crisis unfolding. As I saw it, his trip had four objectives. First was to reassure U.S. allies in Asia that the region still has the attention of U.S. diplomats. The second was to secure a breakthrough in the negotiation on Trans-Pacific Partnership with Japan. The third was to enhance security relations with Japan and the Philippines. And the fourth was to show that the U.S. will be tough on China.

The trip helped bring the President closer to some of those goals. I think it fell short of reassuring them that the U.S. has an active interest in Asia. U.S. diplomacy is clearly shifting toward Ukraine and the Middle East, despite the administration’s rhetoric. On relations with Japan and Philippines, I think some progress was made, but President Obama and Prime Minister Abe failed to reach a breakthrough in their bilateral negotiations regarding the Trans-Pacific Partnership. And President Obama did send a clear message to China on the issue of the Diaoyu Islands.

In their summit last year at Sunnylands, President Obama and President Xi talked about developing a new kind of U.S.-China relationship. But recent interactions between the two countries have been adversarial. Where does the relationship stand, and how do you think it will evolve?

I think both leaders feel committed to creating a better future for U.S.-China relations, but it will be a long term effort. At the moment, there are many differences to overcome. In China, people are finding it hard to believe that U.S. activities in the South China Sea are not intended to contain China.

Political leaders in both countries should keep under control the Sino-U.S. strategic competition. Military relations between the two countries have improved a lot in the last two years, and I think better understanding between two militaries can help reduce the possibility of miscalculation and misjudgment on military matters. It’s very important that the militaries develop better crisis management systems to minimize the risks. I hope that the U.S. visit by General Fang Fenghui will result in concrete progress on that front.

Listen to the AsiaConnect call with Wu Xinbo using the audio player below.