Listen: Rudd on Why U.S.-China Relations Under Xi Jinping Won't Be 'Business as Usual' | Asia Society Skip to main content

Listen: Rudd on Why U.S.-China Relations Under Xi Jinping Won't Be 'Business as Usual' 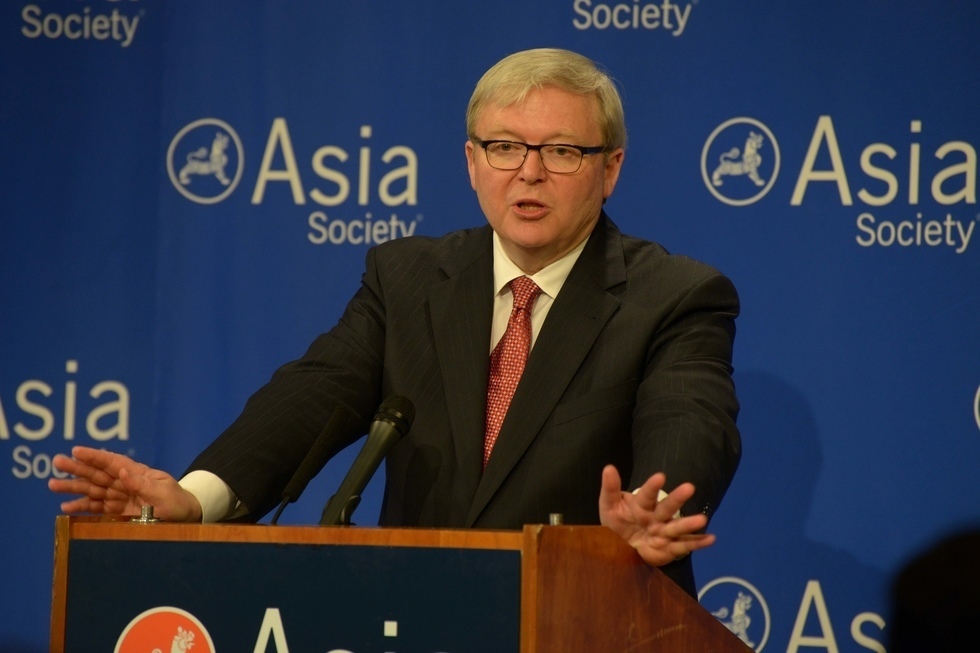 Asia Society Policy Institute President Kevin Rudd recently completed a research project on the future of U.S.-China relations for the Harvard Kennedy School’s Belfer Center for Science and International Affairs. In his report U.S.-China 21: The Future of U.S.-China Relations Under Xi Jinping, Rudd argues that Washington and Beijing can manage their relationship peacefully even as China rises by developing a common strategic narrative for that relationship. Rudd joined the Asia Society Policy Institute’s latest AsiaConnect briefing to discuss his research and conclusions. This blog post presents excerpts from his remarks, along with an audio recording of the discussion.

On U.S. and Chinese perceptions of one another:

I think that the first thing that most Chinese assume about the United States is that the United States will not simply sit on its hands, and allow China to in any way supplant it as the number one global power or the number one regional power in Asia. […] In the last 12 months, China has formed a broader view about operational dimensions about American strategy toward China, which they thought to summarize internally in five core points. Namely, that the United States was pursuing an operational strategy to (a) isolate China, (b) contain China, (c) diminish China, (d) internally divide China, and (e) sabotage China’s leadership. […]

I believe that it’s important for us to recognize that America’s strategic perceptions and conclusions are of a different nature. America and its policy establishment reject each of the five propositions I’ve just referred to from the Chinese. […] America’s strategic conclusions remain that whatever China may say, what it is doing is a policy aimed to see the back of the United States as an important actor in regional security in the decades ahead. Furthermore, the American conclusion [is] that China seeks to create a zone of strategic influence for itself across the region.

On the possibility for conflict between the U.S. and China:

It’s not in the strategic interests of either country for [armed conflict] to occur. It’s not impossible, but it’s highly unlikely. Not impossible for the simple reason [that] you could have an incident between aircraft or vessels, or between the Chinese and American armed forces, whereby planes collide or ships collide and they crash and or they sink. […] Fortunately, the protocols for managing such incidents between the Chinese and the United States have been the subject of recent and significant improvement. Nonetheless, it cannot be removed entirely from the calculus. More worryingly, however, is the possibility of such conflicts, accidental or designed, between the armed forces, of say Japan and China over outstanding territorial disputes in the East China Sea. […]

Having noted those two possibilities, I emphasize again that it is highly unlikely — unlikely in the extreme — that there is any significant possibility of armed conflict between China and the United States in the decade ahead.

On whether the U.S. and China can prevent their divisions from widening:

If you look at the thread of the analysis contained in my report, it does […] lead us to a conclusion that [given] the absence of a common policy narrative between China and the United States, bilaterally, regionally, and globally, that there is a scenario, not in the decade ahead, but perhaps beyond, that in fact we start to see a fundamental divergence between China and the United States. We begin to see fundamental divisions within Asia, between counties which line up with China on the one hand or with the United States in the other. We begin to see this divergence also reflected in the ways both countries approach the existing global rules-based order and any changes which countries like China will seek to make to that order. […]

In the report, I spend a considerable amount of time outlining what I describe as a new common strategic narrative for the two countries. What I describe as constructive realism is [that] China and the United States need to recognize at the level of the two countries’ leadership, their presidents, that there is a list of six or seven items that, frankly, are too difficult to resolve because the realist divisions between them at the moment are too great to manage in the direction of a sustainable solution. Questions such as armed sales to Taiwan, questions such as the East China Sea, the South China Sea, and others: these are outlined in the report.

The report also goes to not only address these realist conclusions, but also what can be done constructively in areas of common engagement between the U.S. and China, in the hope that these common engagements can build strategic trust over time.

Listen to the AsiaConnect briefing with Kevin Rudd using the audio player below.