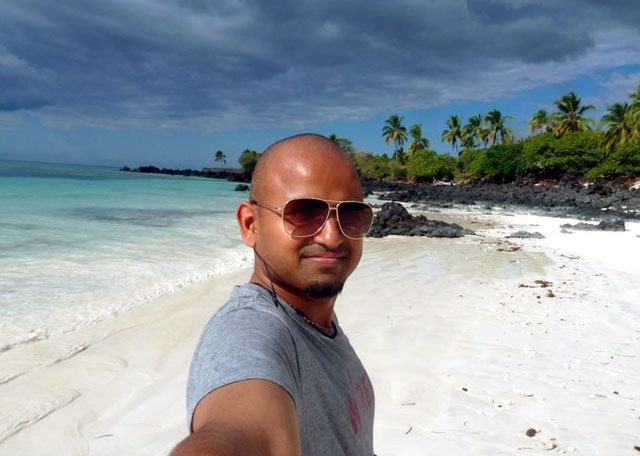 Skift.com founder and CEO Rafat Ali in the Comoros Islands, off the east coast of Africa, in 2011. (Rafat Ali).

In 2002, business journalist Rafat Ali founded paidContent, a news and analysis site centered on the digital media industry. In 2008, Ali sold paidContent's parent company, ContentNext, to Guardian News and Media for a figure said to be higher than $30 million. After leaving the company in 2010, Ali traveled the world for nearly two years — an experience that led to his creating Skift.com, a site dedicated to travel industry news and analysis of which Ali is the founder and CEO. (In addition, Ali also finds time to serve on Asia Society's Digital Media Advisory Board.)

Now based in New York City, Ali shared his thoughts on the current state of the digital media business, and what's stayed with him from his travels, with Asia Blog via email.

How has your Asian heritage impacted your life? What does it mean to you?

Having grown up in three different countries (and continents) — the U.S., the UK and India — something has to keep you rooted, and that has been my Indian heritage. It took me a while to get here, and it has all been a somewhat torturous process. When I first came to U.S. to study for my Masters in Indiana, I initially rejected all things Indian, but once I moved to New York, I could see all around me how different cultures could coexist. Later on, when I lived in London, which is arguably even more multicultural than NYC, that helped solidify that multi-hyphenated existence.

I now live in New York, and my existence is all eastwards and outwards from this city. My eclectic upbringing has defined the worldview I have now, the company I keep, the family life I have built and how and what my new startup does.

You've seen a lot since your days as Managing Editor at Silicon Alley Reporter and founder of paidContent. What has surprised you the most about the development of online content over the years? What are your predictions for the future?

Indeed the world of media and the larger content sector has changed a lot. The formats, the delivery, the user base, the pace, all have morphed in various ways, I believe all for the better. Even the quality of the quality media being created has risen in the last decade — you just have to look at the output of TV shows to clearly see that. Head over to Vimeo, and check the "Staff Picks" there, this is high quality video being created by non-professionals. That has been the biggest surprise, not necessarily for me, but for everyone predicting doom and gloom as everyone becomes a content creator.

Everyone's predicting that TV will get disrupted and then there will be a new normal, all content delivered digitally, as if digital is one discrete box. Chaos, which it is increasingly is, is the new normal, and content creators and companies creating businesses in this environments have to learn to ride it. It is not as if we're going through some transitory stage of the content business, and we will come out sane and peaceful on the other end. In fact, the transition is the new normal.

After you sold paidContent in 2008, you spent two years traveling the world in a "quest for isolation after eight clamorous years." Did you find it? Where?

After pouring eight years of my life and a lifetime into my first startup and selling it, I climbed out of the virtual hole I had built around myself, and breathed.

The idea was to travel to places far and wide, as a way "clearing my head", a cliche which in my case was more true than it would suggest. It would mean retraining the neurotransmitters in my brain to not need constant digital stimuli. It would include going back to reading books and getting back into listening to music.

What was supposed to be a two-to-three month head-clearing travel sabbatical stretched into almost two years spanning ten countries. The idea was isolation, through solo travel to places which don't usually see many outsiders. And in countries which do have tourist traffic, to go exactly the opposite way of the Lonely Planet trail, so to speak.

After traveling through Oman, Iceland (twice), the Outer Hebrides, Mongolia, Tunisia, India (thrice), the Comoros Islands (twice), Colombia, Uzbekistan and Burma, I may have lived another lifetime in these two best years of my life.

Your latest venture is Skift.com. Why start a travel site?

Skift is a business information startup focused on the travel sector. We believe we are building a travel information brand in the largest sense of that phrase — a startup built to scale out of the vertical ghettos, and match the size, scope, ambition and creative promise of the world's most exciting and largest sector, travel.

We don't just look at it as a travel site, we look at it a a brand we're building, and Skift.com is the first manifestation of it. We have plans to build out data services for the industry, and other information and tools for the business travelers down the line.

Travel is a great sector, the legacy competitors are digital backwards, and we believe there is a large white space in it. Hence Skift.

You recently spent some time traveling in Myanmar. What was your experience like? Would you recommend it to others?

Yes, I went last year in late February, a month or so before the elections in the country. It was and still is a very hopeful and optimistic time in Myanmar, as the country's opening up very rapidly, so for us, we could feel that new energy flowing through the country. That's what I loved. And then the food and particularly the ingredients were unlike any other place I have been, away from the mass industrialization of agriculture yet to touch the country in any big way. It also is possibly the most photogenic place on earth, even more so, I daresay, than India, primarily because Myanmar is still stuck in the old world, and with a tiny step into modernity, the juxtaposition creates some great stories you can tell through photographs.

But the country's being besieged by tourists, it is the hottest new destination on the planet right now. So the trick is to go right before or right after the main tourist season of November-February, when you can actually get a decent hotel room and flight to travel within the country.