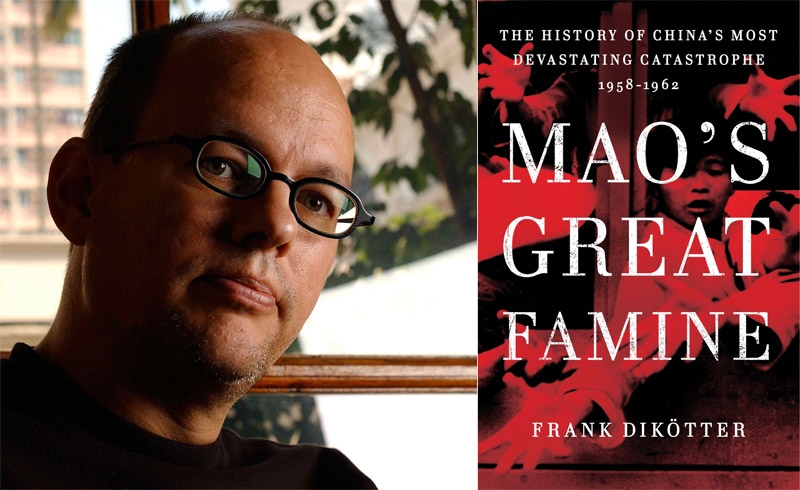 The Great Leap Forward, Chairman Mao Zedong's attempt to transform China into an industrial economy overnight, resulted in one of the biggest humanitarian disasters in world history. From 1958 to 1961, an estimated 20 to 50 million Chinese citizens died prematurely in one of the worst famines in human history. Though the event is well known among historians, the man-made famine has thus far received comparatively little attention among the broader Western public.

With the publication of Mao's Great Famine, historian Frank Dikötter has provided a tremendous boost in our understanding of the Great Leap Forward, combing through Communist Party archives to provide a thorough picture of the disaster. Mao's Great Famine was published to wide critical acclaim in 2010 and was a runner-up in the 2011 Asia Society Bernard Schwartz Book Award, which will be awarded at Asia Society New York on December 1, 2011.

Dikötter spoke to Asia Blog about Mao's Great Famine, China, and why attempts to rehabilitate the Chinese dictator are misguided.

Looking back at the period since you finished the book, what stands out as significant trends or news stories that fit in with the framework you provide in Mao's Great Famine?

Well, it’s a difficult question to answer, as there’s been no new research on it if that’s what you’re asking. But there was an interesting article in the South China Morning Post this morning by Robert Park which made a case that the famine in North Korea amounted to genocide, something I thought was an interesting legal argument.

Is there anything that's happened during the time following the publication of the book that makes you wish you could go back and edit it a bit? Or, to put it another way, if the book were to go into a second edition, any thoughts on what you'd want to do to bring it up to date?

With every edition, I discovered a number of small mistakes, either in the English or in a couple of the place names that are wrong, just a couple of errors here and there and nothing major. The book publisher has been quite good in allowing me to correct those mistakes so each edition is better than the previous one.

In terms of the content of the book, though — is there any information you’d want to add to a new edition?

No, not really no. I’m actually working on the prequel, but that’s a whole different book. I think it’s obvious that you have to explain what happened from 1949 to 1957, you have to explain those [first] years of Communist rule, in order to really comprehend how Mao could just push this Great Leap Forward in ’58 with so little resistance. But that’s in the works.

Why did you decide to tackle the Great Leap Forward in the first place? Did you feel there was an absence of information about the subject that a lot of people in the West didn’t know about it?

Tell me, how many books have you read about the Holocaust?

Quite a few. How many books have you read about the Cultural Revolution? Quite a few. How many books have you read about the Great Leap Forward? Tens of millions of people died! There’s one book by one journalist called Jasper Becker that was published 10 years ago. It’s a subject crying out for more study. You don’t ask Saul Friedlander why he thought it was necessary to have another book on the Holocaust. You don’t need to explain it. With the Great Leap Forward, it’s one of the big black holes of human history, it beats Stalin, it beats Hitler. It’s the largest man-made catastrophe in human history. It’s extraordinary! There should be teams of researchers and historians in every major university working on it, in the same way that every history department has someone doing something on Nazi Germany. It ought to be the same.

Why do you think it was largely ignored until now?

Well to be fair, while I think it’s obviously utterly important to explain how China came out of the Great Leap Forward, including the Cultural Revolution, in China until now it was almost incomprehensible to understand what happened 50 years ago. But the real reason now is that a lot of archives are quietly opening up, archives up to roughly 1962 to '63, so it was a really good opportunity to dig in. Basically, to put it quite bluntly, it’s the first and only book written in English on the history of the Chinese Communist Party that is squarely based on Communist Party archives.

Do you think there will be a sense of revisionism toward Mao in the coming years as more scholarship about the less savory aspects of his rule will come out? Has China has made up its mind about Mao?

China hasn’t made up its mind, but the revision might not work in the sense that you and I might like it to work. In other words, what you see more and more now, is that the leadership, at the very top level, is telling us how Mao was a fundamental part of the Communist heritage. In a way, it’s all they’ve got.

Pankaj Mishra accuses you, in a review of your book in the New Yorker of glossing over the historical context of the Great Leap Forward in the book. Do you think that that’s a fair assessment?

No, I don’t think so. I think Pankaj Mishra is clearly one of those old lefties who haven’t quite gotten over the fact that socialism isn’t the utopian paradise that it was promised to be. He’s nostalgic for socialism. He’s one of those who, despite whatever evidence you come up with, of the horrors and realities on the ground, will still find an excuse to tell you that Mao’s rule wasn’t that bad. He’s like one of these people who goes around telling you that Adolf Hitler built highways or solved the inflation problem. It’s called denial. Denial and apologia. [Editor's Note: We thought we should give Mr. Mishra an opportunity to respond. You can find his rebuttal at the end of this interview.]

In your judgment, does Mao deserve mention with Hitler and Stalin?

Readers wondering whether I am a deluded socialist, a nostalgic Maoist, or likely apologist for Hitler, can read my review of Frank Dikötter’s book, which is available on New Yorker.com. Here is one excerpt from my review of Mao’s Great Famine outlining my view of the Chairman:

Modernizing autocrats elsewhere in Asia — Turkey’s Atatürk, Iran’s Reza Shah Pahlavi, and Taiwan’s Chiang Kai-shek — also dragooned their peoples into traumatic social and political experiments. But Mao tormented the Chinese on a far bigger scale, condemning tens of millions to early death with the Great Leap Forward, and then exposing many more to persecution and suffering during the Cultural Revolution.

Here are my reservations about Dikötter’s book that the Asia Society’s interviewer referred to:

Focusing relentlessly on Mao’s character and motivations, Dikötter confirms the man’s reputation as sadistic, cowardly, callous, and vindictive. Yet his bold portrait bleaches out much of the period’s historical and geopolitical backdrop (the uprising in Tibet in 1959, anti-American riots in Taiwan, border clashes with India, the Sino-Soviet rift), and he misses, too, the abusive relationship between Mao and the Chinese people: how sincerely and deeply, for instance, they trusted and revered their leader before being betrayed by him.

I am not sure why these mild objections to his book should provoke such an intemperate outburst from Dikötter. Certainly, if you follow his logic, then those asking for a historical backdrop to the rise of Nazism — the humiliation of Versailles, for instance — and its initial appeal among Germans are frustrated fascist utopians and/or apologists for Hitler. And those who reject his obsessive moral equations — Mao=Hitler and China’s Great Famine=the Holocaust — are contemptible deniers and apologists.

A crucial nuance is lost on Dikötter, and should be highlighted again: that people exposed to early death mostly as a result of terrible decisions, crop failures and food shortages belong to a different order of victimhood than those singled out for being Jewish or homosexual and then gassed to death or shot. To imply otherwise is to cheapen the extraordinary and unprecedented crime of the Holocaust. Dikötter’s assault on me also manifests the moral confusion and ideological stridency that frequently mars his book. Hopefully, we won’t have to wait too long for the English translation of Mubei (Tombstone), an authoritative account of the Great Famine by the Chinese journalist Yang Jisheng.

Mishra's response is typical. Having read Mao's Great Famine and reviewed it in the New Yorker, he still goes on telling us that tens of millions of people died unnecessarily "as a result of terrible decisions, crop failures and food shortages". He should read the book again: it is not about crop failures, and it is not even about food shortages, as China continued to send grain for free to other countries, including Albania, at the height of the famine. The book is about the use of food as a weapon to punish those who did not work hard enough, as people were deliberately cut off from the canteens and left to starve, including children, the sick and the elderly; it is about routine coercion and violence, as cadres humiliated, tortured and beat people in the pursuit of higher quotas, killing several million people; it is about the crucial distinction between people starving to death and people being starved to death. Here is Mao in March 1959: "It is better to let half of the people die so that the other half can eat their fill."

Nowhere do I equate the tens of millions of people who died in China during the Great Leap Forward with the Holocaust. But I do say that the mass murder that took place ranks among the three biggest crimes against humanity in the twentieth century, including the Gulag.

But for Mishra it is merely a "tragedy of bad decisions", comparable to what other modern states have done, including Taiwan. Here is what he wrote in the Guardian on 19 July 2011:

It is tempting to denounce Mao as a monster, and to dismiss the Maoists of today as no less criminally deluded than Peru's Shining Path guerillas, or the Khmer Rouge. Certainly, the scale of the violence Mao inflicted on China dwarfs all other crimes and disasters committed during the course of nation-building in the last two centuries. But political and economic modernisers elsewhere also exacted a terrible human cost from their allegedly backward peoples. In the last century alone, millions died due to political conflict or hunger and were brutally dispossessed and culturally deracinated in a huge area of Asian territory, from Turkey and Iran to Indonesia and Taiwan.

In the same article Mishra informs us that Maoism "retains its vitality and speaks to the world's poor more fluently than ever". I cannot help but suspect that Mishra actually means that Maoism speaks to him, rather than to the "world's poor".

UPDATE: Mishra responds: "I'd like to have the chance to point out that nowhere in the article do I say what Dikötter puts in my mouth in the following sentence (he has taken words from Yu Hua and the heading provided by the sub-editor and stitched them together): 'In the same article Mishra informs us that Maoism 'retains its vitality and speaks to the world's poor more fluently than ever'."