Interview: Editor of 'Unsavory' China Expat Anthology Aims to Include Range of Voices 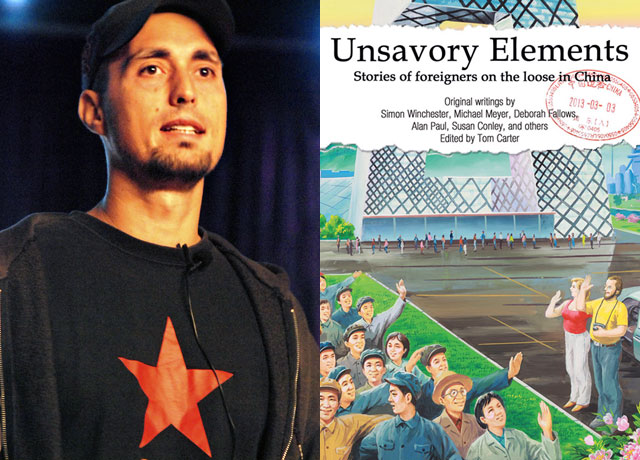 Released last year by Earnshaw Books, and available since the fall on Amazon.com, Unsavory Elements is a wide-ranging anthology of original nonfiction pieces by 28 expatriate writers who either live or have lived in China. Praised by such local outlets as the South China Morning Post and Time Out Shanghai, the book brings together established mainstream journalists and up-and-coming bloggers for a comprehensive overview of the China expat experience at the start of the 21st century.

Earlier this week, Yining Su interviewed the book's editor, Tom Carter, along with its publisher and a contributor, for the website Shanghaiist. Excerpted below is her interview with Carter; a link to the complete interview appears at the bottom of this post.

Shanghaiist: The book is an anthology of stories by 28 different contributors, some of them quite well-known, and some of them less well-known. How did you decide who to commission from? How did you balance the mix of newer and more established voices?

Tom Carter: When I first conceived this project, years ago, I was actually conflicted about whether I should showcase established authors or offer a voice to the voiceless: emerging talent who had been snubbed by publishers but who I knew had cool, true stories to tell and could tell them well. My first book, CHINA: Portrait of a People, was published by an indie press in Hong Kong (Blacksmith Books) and I too have felt the cold shoulder of Big Publishing, so that is the direction I was leaning. However, lit agents I originally queried were adamant that an anthology should exclusively feature "branded authors" and celebrities or the book would never find a home.

So for nearly a year I was caught up in this impasse with the agents, until I met Graham Earnshaw for the first time after I moved to Shanghai in 2012. Graham liked the idea of an expat anthology, and was supportive about my inclusion of relatively unknown writers (such as Shanghaiist founder Dan Washburn and Susie Gordon) featured alongside household names like Peter Hessler and Simon Winchester. And as you can see, it worked out quite harmoniously.

Other than getting the right mix of more and less established writers, what else did you consider when choosing the stories for this anthology?

There are a couple major themes coursing through the collection that I architected: one of them is that I wanted to give the reader the impression of experiencing an entire lifetime of an expatriate, from fresh-off-the-boat culture shock to the assurance of an Old China Hand. I wanted there to be something for everyone, expats and casual travelers alike. I certainly did not want this to just be a collection of sordid tales, which is why I tempered it with family-friendly fare and foodie pieces, and yet after assembling everyone's essays I knew it would be disingenuous to leave out the less "savory" stuff. That is why I ultimately decided, against Graham's sagacious advice, to martyr myself with my xiaojie story, which wound up offending certain critics.

Other than making the choices of what to include, what other duties did you have as editor? Did you suggest many edits, or were you hands-off?

I was extremely involved, sometimes to Graham's exasperation, who had to field a few calls from contributors questioning my proactive approach to editing. In retrospect, perhaps I was a bit too persistent about their perfection, but I really couldn't help it: I enjoy classical writing over contemporary and wanted the anthology to be a return to the old-school style of short stories in the vein of Somerset Maugham. I dislike reading blogs, and even reportage today is vapid and uninspired, so I wound up clashing with a few bloggers and journalists who weren't used to writing literary long-form narratives.

But, you know, all great creative collaborations have had their share of tension and disagreements; there hasn't been an album producer who didn't quarrel with his recording artist, or a director who didn't scream at his actors, so it's only natural that publishers and authors, or editors and writers, also have some rifts along the way. I was just one fellow editing 28 stories while placating 28 different personalities — and believe me, authors tend to be quite precious. But I had a crystal-clear vision for this book, and I think the final product proves that my over-involvement wasn't a bad thing.

Read the remainder of this interview, with Unsavory Elements publisher Graham Earnshaw and contributor Susie Gordon, on Shanghaiist.com.