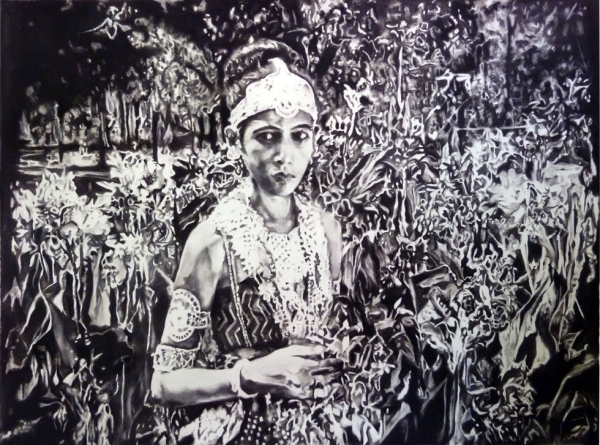 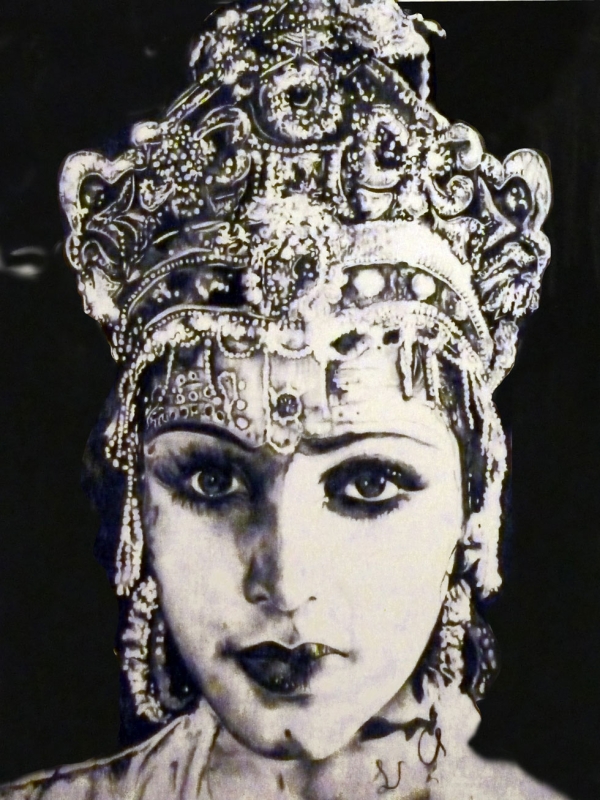 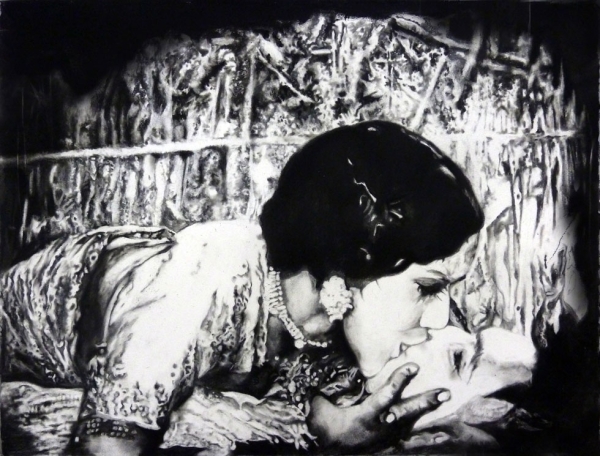 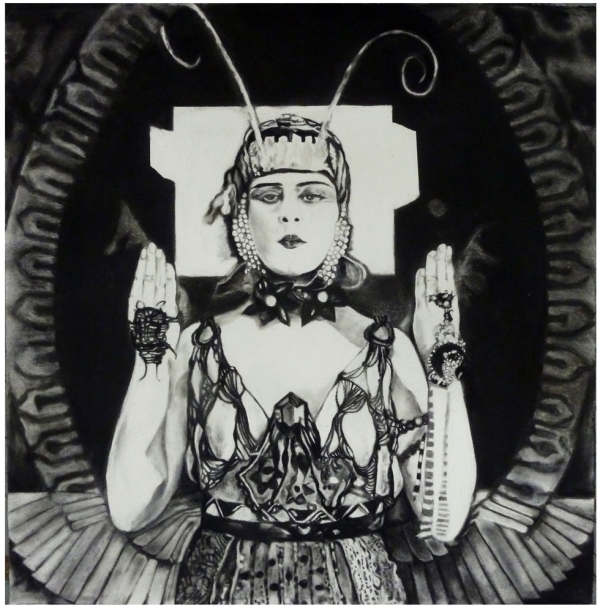 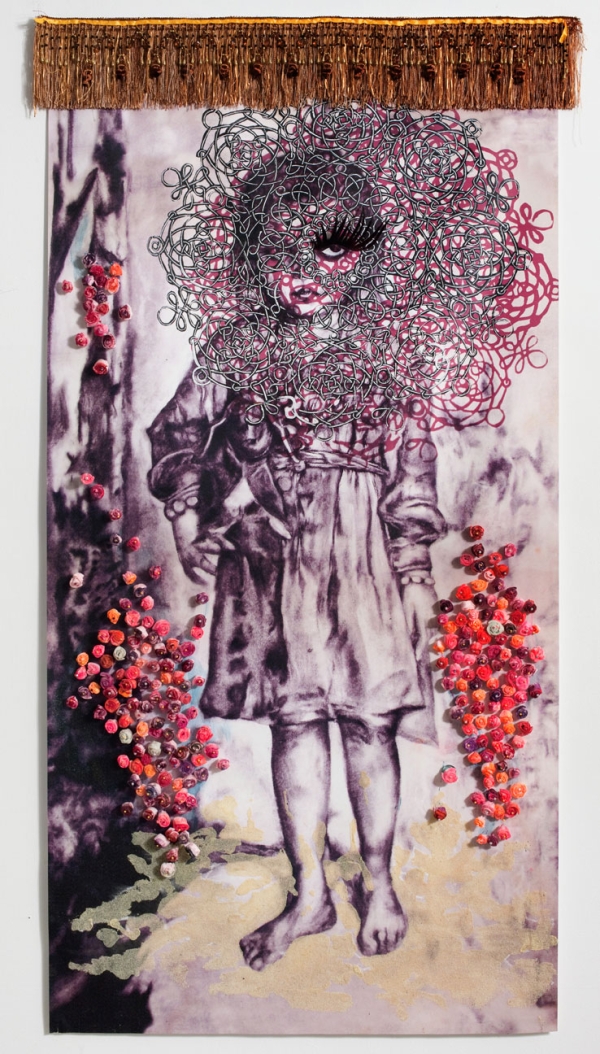 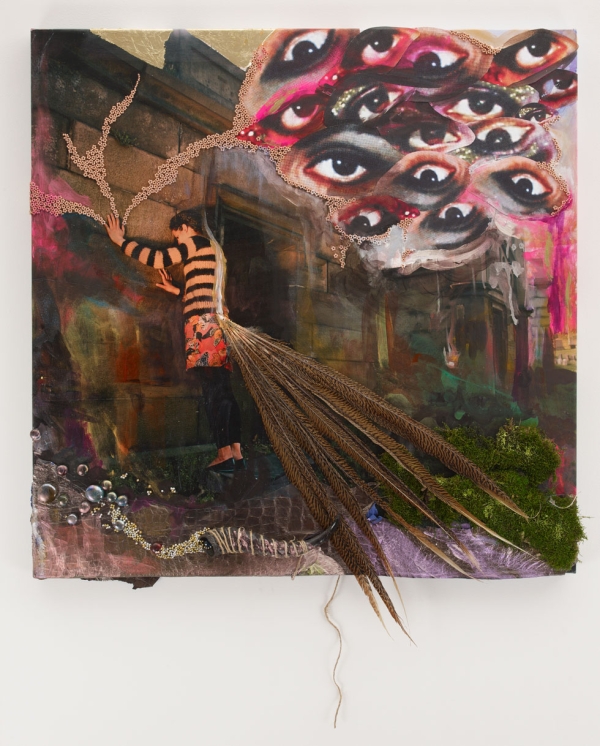 When Asia Society Museum's 2006 group exhibition One Way or Another: Asian American Art Now toured to the Blaffer Gallery at the University of Houston after its New York run, the Houston Press singled out the contribution by artist Chitra Ganesh (a surreal mural that spilled into three dimensions) as "singular — simultaneously elegant and unsettling."

Those words could serve as an apt thumbnail introduction to Ganesh's art overall — paintings, drawings and installations that delve headlong into themes of female sexuality and aggression in ways that are equally playful and provocative, using imagery derived from Hindu mythology, Bollywood, comics and science fiction. What unites these disparate influences are the artist's formal gifts (her drawing ability in particular), which ensure that the work is as visually striking as it is conceptually freighted.

Ganesh's latest solo exhibition, The Ghost Effect in Real Time, on view at the Jack Tilton Gallery in New York City through June 23, finds her working through her themes in a new context, the world of silent movies. Her arresting wall-sized charcoal portraits of primordial screen icons like Theda Bara and Devika Rani have a spectral beauty that's ideal for evoking the long-lost world of the silents, and makes the exhibition's title seem only appropriate.

Reached via email, the New York-based artist (who just won a Fellowship in Fine Arts from the John Simon Guggenheim Foundation) shared some insights into her new work with Asia Blog.

The Ghost Effect in Real Time seems to mark a new phase in your work. Are silent movies a recent interest of yours? What was the attraction of this imagery for you?

The works in The Ghost Effect in Real Time reflect a recent focus on charcoal drawings inspired by silent cinema, which has organically evolved from my drawing-based practice over the past several years. My work across media is unified by a keen interest in exploring intersections of mythic narratives, bodily excess, science fiction, and iconic representations of femininity.

I was initially drawn to the imagery and content of silent cinema last year, when I was preparing for an exhibition at Nature Morte Berlin. I became curious about historical/visual relationships that might have existed between Germany and India, and my research led me to assemble a body of images, largely derived from film stills, documenting a number of Indian-German silent cinema co-productions in the 1920s, between Himanshu Rai and Franz Osten, which culminated in a trilogy of films based on the life of the Buddha and scenes from the epic myth the Mahabharata.

I also learned that in this era, biologically female actresses were extremely difficult to come by, as acting in cinema threatened notions of appropriate middle-class femininity, and thus many of the earliest "actresses" were men playing female roles, young girls or children, and Desi (South Asian) actresses of Anglo-Indian femininity.

From this initial research, I was struck by salient narrative threads connecting a range of silent cinema across culture and continents. For example, narrative intersections among Orientalism, mythology and folklore, the passage of time, and science fiction/future cities simultaneously animated productions in India, Germany, Russia and the United States. Identifying the convergence of these narratives in what was then a cutting-edge shared technology, and seeing how silent cinema contributed to visualizing an iconic femininity that endures in contemporary visual culture today, gave me the momentum for creating a body of work that is a visual exploration of a historical/cultural moment.

One of the works refers to Raja Harishchandra, from 1913, which most scholars regard as the first Indian feature film. Is it just a coincidence that your new series coincides with the upcoming 100th anniversary of India's film industry?

The titles for the drawings based on silent film include specific information about the actresses, names of films referenced, and so forth, allowing the referential information to illuminate the context and content for the viewer. The drawing titled Raja Harishchandra presents a montage of stills from what has widely been considered India's first feature film, and one of the masterpieces of director Debashish Phalke, the "father of Indian cinema." It is just a coincidence that we happen to be coming upon the 100th anniversary of India's film industry. 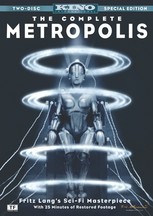 However, in the midst of researching and executing this project I did begin to notice that there is a current surge of interest in explorations of early cinema within the contemporary film context itself. For example, Martin Scorsese's recent film Hugo (2011) invokes the work and imagines the disappointments of George Melies, while Paresh Mokashi's film Harishchandra Factory (2009) chronicles the personal and economic hardships Phalke faced. Both films explore the enduring legacy and often daunting challenges met by early pioneers of silent cinema, while films such as The Artist, and ongoing restorations of silent cinema classics such as Fritz Lang's Metropolis [right], also reveal a contemporary interest in exploring the silent period.

I was wondering if you could elaborate on the title The Ghost Effect in Real Time a little bit. There's something downright eerie about several of the images in this series — which the title seems to acknowledge…

The exhibition's title, The Ghost Effect in Real Time, on the one hand seeks to illuminate the haunting and emotionally evocative quality pulsing through early cinematic visions of femininity, exploration, bodily transformation, which move freely between breathtaking fantasy and the material constraints of quotidian existence.

It's also evocative of some key filmic techniques I observed as recurrent themes in the films I drew from, terms that shaped early cinema. The "ghost effect" refers to techniques of double exposure or in-camera superimposition, frequently deployed in early cinema to create the effect of a supernatural on-screen presence, a highly accelerated passage of time, or the appearance of visions or premonitions, often in circular vignettes. "Real time" refers to the the filmic technique of narrating actions or events that occur entirely within the span of time in which it is shown on screen.

In this way, the title also embodies the dialectic relationship in early cinema between fantastical, otherworldly narratives and the medium's reflection of early 20th-century modernity and the emergence of clock time.

Elements of the Haunted Documents section of this exhibition, like the large, disembodied eyes in #14, Althea [image #6, above], are immediately recognizable as your work, whereas in the silent movie series you seem to have effaced or sublimated your distinctive style. How conscious an artistic choice was that — did you deliberately try to "step out of the way" in these images? 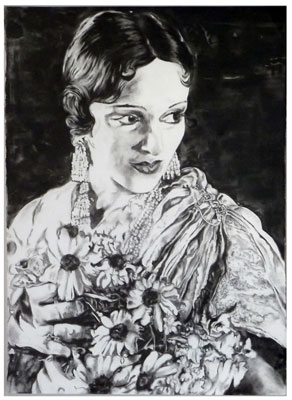 Both the content and stylistic choices informing the charcoal drawings were the culmination of a few years of investigation and experimentation with the content and medium. I first used the large-scale charcoal drawing more when working on The Unknowns, a series of nine large mixed-media works on canvas that comprised a site-specific installation at the Travancore Palace in New Delhi for the Indian Art Summit in 2009. For this exhibition, I was interested in mapping the visual relationships between anonymity and iconic representations in producing narratives of femininity and female sexuality.

One work from the series was based on old black-and-white photographs of my partner's mother, which were rendered in charcoal and included sculptural elements [image #5, above]. I then created three charcoal portraits of iconic actresses from the Indian-German silent cinema period [such as Devika Rani, right], a series which has led to a full-scale exploration of both feminine icons as well as thematic aspects of these films.

The painterly style of these works is very much connected to the gesture and brushstroke that characterized my earlier paintings on canvas. In this instance, I was very interested in how both charcoal on paper, as well as black-and-white film, rely so strongly on light as a primary medium. I was interested in the potential of translating the notion of light as a primary medium, and what this translation between film and drawing would look like.

On the other hand, there is some thematic consistency here because powerful, even fearsome female figures have been a recurring subject for you. Is it too much to see icons like Devika Rani, Theda Bara and Fritz Lang's robot woman as spiritual cousins or descendants of the goddesses and demons you've painted in the past?

There is definitely a consistency in the themes and content explored across my works which is a pivotal part of this project as well — namely, my interest in exploring stories and icons of femininity or sexuality that remain at the edges of canonical understandings of history, literature and art.

I was haunted by the frequency of bodily transformations inherent in early cinema's depictions of femininity — with characters moving freely between corporeal matter, spirit, animal and automaton. These moments provided me with links across history and time to the kinds of iconographies I have been interested in developing and giving voice to in my drawing-based practice across media.