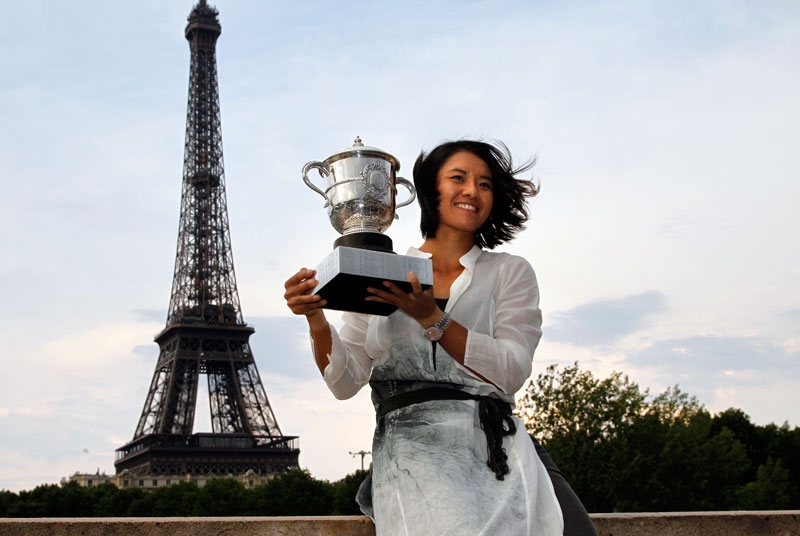 Beijing-based American writer Maggie Rauch discusses the importance of Li Na's French Open victory and what it might mean for the future of Chinese sports.

When China's Li Na won the French Open over the weekend in Paris, she became the first Chinese tennis player — male or female — to win a major tennis championship. And, according to Beijing-based American writer Maggie Rauch, who launched the first English-language blog about Chinese sports in 2008, Li also instantly became the "most compelling currently active sportsperson in the country."

Could Li's tennis triumph lead to reforms in China's state sports system? We posed that question and more to Rauch via email this morning.

Can you describe what the reaction to Li Na's French Open victory has been like in China? How popular is she compared to other Chinese athletes like Yao Ming? Did the average Chinese person know her prior to this win?

First and not surprisingly, I think people are generally thrilled about this. When a Chinese athlete reaches the pinnacle of her sport, it dominates news and conversation nationally in a way that it would not in the United States. I think it's a safe bet that she was on the cover of every newspaper there is in this country, including the very CCCP-dominated People's Daily. Anyone in China who cares at all about this sort of thing has been waiting a long time for a Chinese athlete to do something like this — show that they are one of the best in the world in a sport that the world watches.

Since the 2008 Olympics, there has not been much for China to cheer about outside of the sports like badminton and ping pong that it has traditionally dominated. There was distance swimmer Zhang Lin, snooker player Ding Hui, and the gold medal-winning figure skating pair — who for obvious reasons just don't generate the kind of excitement that the winner of a major tennis tournament does. It's fair to say that China has been looking for the next Yao Ming, for an athlete who can be one of the world's best in a sport that is watched all over the globe. That has led to some Yao comparisons, which I don't think are really apt.

Li Na was not an obscure figure, but not the household name she has become now. Sports fans definitely knew who she was, and her profile has been rising steadily with her level of play. But I don't think she has ever been on the cover of Sports Illustrated here [can't get all the archived covers to load on my computer right now], and although she has had some endorsements for several years, I would say that before her run at the Australian Open, she was low in the second tier of Chinese athletes in terms of fame and popularity. After Australia, she had climbed to number 35 on the Forbes China Celebrity List, and with this win, she is now without a doubt the hottest athlete in China.

What is the China Tennis Association's "Fly Alone" program? Could Li Na have won a major without it?

The "Fly Alone" program was rolled out shortly after the Olympics. Basically, the tennis administration gave national team players the freedom to take control of their careers — choose coaches, set training schedules, make their own business decisions and keep much more of their winnings. It went from 35 percent that they could keep up to 88 percent. In exchange, they lose the security of being truly looked after the state system. Four players opted to "fly alone."

As much as you never know what could have been, I'm just going to say she never would have won without this reform. There aren't a lot of other ways to explain how she won her first major at 29. She had cracked the top 20 once briefly before this reform; now she's won the French Open and is ranked World No. 4. If the Chinese sports system had the capability to get her to this level they would have done it in time for the 2008 Olympics. Of course it helps that the women's game is missing several of its stars and generally not at its best right now. But she has changed her game and grown a lot as a player. She wasn't even as good in January at the Australian Open as she was at Roland Garros. She had a mental meltdown against Clijsters, and this time she maintained championship poise through to the end.

Do other Chinese sports have similar programs? If not, do you think Li Na's win will spark a significant change in China's sports system?

There is nothing comparable to this program — tennis really pioneered it. There has been increasing openness in terms of doing more exchanges and letting basketball and soccer players play in international leagues, but the system has fundamentally remained the same.

I think that people have felt that the system needs some kind of change for a while now — if for no other reason than the dismal performance of the national soccer team. As I tend to be an optimist and am not a fan of the current model, I think that it is inevitable that Chinese athletes will be more empowered. For other sports to follow tennis's lead, there had to be one or more very good success stories. I think that would have come in the next few years regardless, but now Li Na gives the Chinese Tennis Association its proof that its leaders did the right thing. I don't think we will see any significant changes before the 2012 Olympics, but Li Na has spurred media conversation and sparked fans' imaginations about what could be in China's future. And she's made that happen sooner than a lot of people expected.