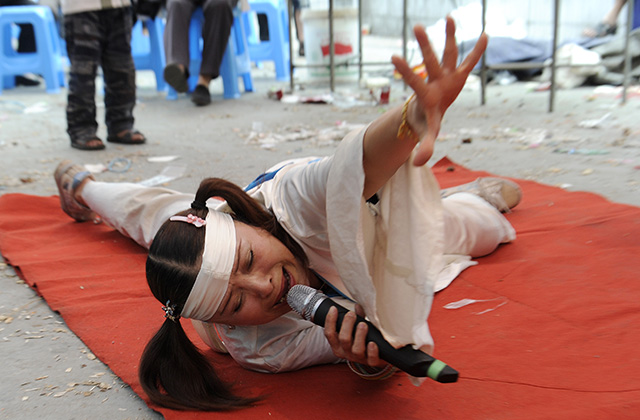 Criers For Hire is a new play presented by the East West Players in Los Angeles that tells the story of Aurora, Remedios, and Eugenia, who are three Filipino professional funeral criers — people hired to dramatically mourn in order to encourage similarly cathartic sobs from other attendees. Their most recent hire, the 14-year-old Gaya, has real-life reasons to cry — but she instead only finds herself laughing.

The play, which was written by Giovanni Ortega and directed by Jon Lawrence Rivera, is a heartwarming tale that addresses themes of cultural identity, generational conflict, and finding home in a new country. The story centers around a custom that may seem odd in most Western cultures but is surprisingly common in Asia — professional weeping, a trade found across the continent that the New York Times dates to as early as 1877.

“Our entry into the world is splendidly dramatic, so our exit from this world also needs to be spectacular,” Hu Xinglian, a professional crier in the southwestern city of Chongqing, China, said, according to a report by NPR. “Some people can’t cry. So I use my heart to sing this song to represent the loss of the younger generation.”

In the Thar desert region of Rajasthan, India, the tradition was introduced as a result of the caste system. According to a report by the BBC, women in lower castes were hired at funerals to mourn on behalf of the upper-caste and privileged women who were expected to maintain their composure and dignity and avoid public displays of emotions.

In Vietnam, professional mourners are hired to help take the attention off of family members so that they can handle other responsibilities. “Hiring professional mourners allows us to spend less time mourning in person, and more time to receive our visitors and do other things, such as preparing funeral banquets,” Bui Van Dinh, a Vietnamese man who used mourning services for his father’s funeral in 2013, told the Xinhua News Agency.

Though funerals may be a somber event, Ortega taps into the absurdity and theatrics of being a mourner and finds that it easily lends itself to comedy.

“Their escalatingly ridiculous techniques for faking grief send the audience into hysterics,” a review in the Los Angeles Times said, adding that the story is “told humorously and movingly, with fresh colors and details.”

Criers For Hire will be playing at the David Henry Hwang Theatre at the Union Center for the Arts in Los Angeles through March 13, 2016, and is presented in community partnership with Asia Society Southern California and FilAm Arts. For more information click here.