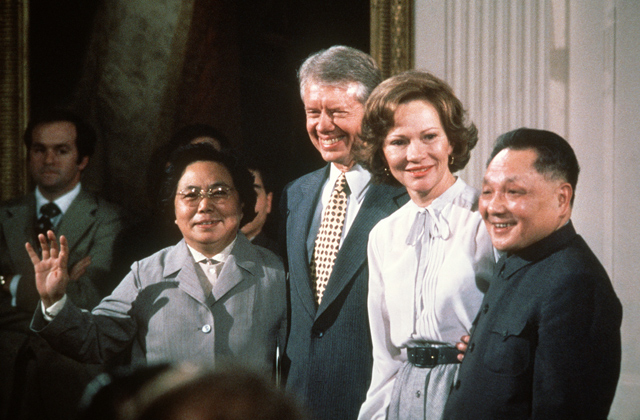 In 1978, Deng Xiaoping assumed power in China and soon launched a program of market reforms, ultimately transforming an impoverished, rural economy into the world's second-largest within a mere three decades. In his new book Unlikely Partners, Julian Gewirtz, a doctoral candidate at the University of Oxford and a Rhodes Scholar, explores how the Chinese miracle received assistance from an unheralded group of economists hailing from the United States and Europe. The book, which Asia Society Arthur Ross Director of the Center on U.S.-China Relations Orville Schell calls "wonderfully meaty" and a "fascinating road map" to the evolution of China's economy, was published by Harvard University Press in January.

Asia Blog caught up with Gewirtz recently for a chat about Sino-Western relations, economics, and what President Trump could learn from the Chinese.

Your book begins with the death of Chairman Mao in 1976 and discusses how Deng Xiaoping, who wrested power from Mao’s successor Hua Guofeng, greenlit market reforms. How much was Deng’s decision a reflection of the elite consensus in China at the time, and how much depended on his personal instincts and experience?

After the devastation and chaos of the Cultural Revolution and the arrest of the Gang of Four, there was a general consensus that a new approach to the economy was necessary. China was poor, with a per-capita gross domestic product (GDP) well under $200. Even before Deng came to power, Hua Guofeng had prioritized rapid industrial development and importing foreign technology to grow the economy. He also facilitated the return of many economists and policy makers who had suffered greatly during the Cultural Revolution. Hua has been written off as only interested in upholding “whatever” Mao said, but the real story is more complicated.

When Deng surpassed Hua as China’s top leader, he set about putting into practice a very vigorous and pragmatic agenda for encouraging the country’s economic development. Deng had been purged repeatedly in the Mao era and had a low tolerance for ideological rigidity regarding the economy, so he encouraged China’s officials and intellectuals to “seek truth from facts,” to approach the world with an open mind, and not to be too hung up on whether a policy seemed “socialist” or “capitalist.” His strong personal commitment to economic modernization and “reform and opening” was a driving force during this period, but Deng often stayed a bit removed from the intense and more specific policy debates that emerged between Party officials who wanted faster market reform and those who were more conservative, traditional socialists.

A central character in your book is Zhao Ziyang, China’s premier in the 1980s and a man purged after opposing the crackdown at Tiananmen Square. To what extent has the denouement of Zhao’s career obscured his role in engineering China’s reforms?

His role has been greatly obscured. Zhao Ziyang served as premier and then general secretary of the Chinese Communist Party (CCP) during the 1980s until, as you say, he was purged and placed under house arrest, where he remained until his death in 2005. As a result, his role in shaping China’s transformation has been almost entirely erased in China. During his time in power, Zhao oversaw and directed the development of many market-oriented policies that powered growth. He set out a vision of a system in which, as he put it in 1987, “the state manages the market, and the market guides the enterprises.”

He was unremittingly curious and far more open-minded than one expects of a leader who came up through the ranks of the CCP. “My earliest understanding of how to proceed with reform was shallow and vague,” he acknowledged in his posthumously published memoir, Prisoner of the State. “I did not have any preconceived model or a systematic idea in mind.” This attitude drove him to empower reformist officials and experts, demanding that they bring him the best ideas they could find and protecting them when they ran into trouble.

After he was removed from power, the CCP also removed him from the history of the period in which he had led the country. Today, his name almost never appears in print in China. The party takes credit for his achievements or attributes them to Deng. Unlike Hu Yaobang, the ardent reformer who preceded Zhao as CCP general secretary and was also removed from power, Zhao has not been rehabilitated.

The post-Tiananmen period empowered reactionary elements within China’s government who had supported taking a hard line against the protesters. What was their vision for how China’s economy should have run? Did they favor a return to Mao-era policies, or something else?

In the 1980s, the overriding priorities that united the various interest groups that we call “conservative,” “traditionalist,” et cetera, were strong commitments to asserting the power of the Communist Party, upholding the primacy of the planned economy, and to maintaining stability. Some more extreme people still believed in Mao’s radical utopianism, but a more common conservative view was that economic planning should remain primary and be made to produce better results — but that markets were destabilizing, risky, and might lead not only to economic liberalization but also to political liberalization of the sort that some CCP conservatives found terrifying.

They saw their influence recede during most of the 1980s, but after the brutal Tiananmen crackdown in 1989, conservatives gained ascendancy for a while. They pointed to what had happened in Poland, Romania, and other countries in Eastern Europe after economic liberalization, and drew the lesson that even more stringent control over society, including the economy, would be necessary to ensure the survival of the Chinese Communist Party. But they lost their decisive power after Deng Xiaoping embarked on his famous “Southern Tour” in 1992 and called for pushing forward with the reforms.

Why do you think certain Western economists invited to advise China had more influence than others? What characteristics made the most influential particularly effective?

Some of the most influential foreign economists who visited China in this period were individuals who came from socialist countries and knew firsthand about transitions away from central planning, such as the Hungarian Harvard professor János Kornai and the Czech émigré Ota Sik. They were familiar with the intricacies of socialist systems and Marxist ideology, so they could speak in terminology that was familiar to CCP officials. And they were perhaps more easily able to understand the dilemmas facing those Chinese policymakers.

But Deng Xiaoping also called for the study of “the successful experiences of capitalist countries.” Thus, economists such as the American Nobel laureates James Tobin and Milton Friedman were invited to China for high-level engagements that brought important — and often controversial — viewpoints to China. Others, such as the Americans Lawrence Klein, Gregory Chow, and Dwight Perkins, helped shape the teaching of modern economics in China, while also advising on policy challenges.

I argue that we should think about which ideas provided new tools to Chinese policymakers or prompted productive debates that led to the formulation of better policies — rather than a checklist of which ideas were and weren’t accepted wholesale in China. The Chinese learned a great deal from these foreign economists, but they didn’t just copy their ideas. So one of the goals of this book was to assess the varied influences on China’s economic policies in a way that acknowledges the Chinese side’s agency in this process of international engagement.

You conclude by warning that China’s current leadership appears to oppose Western thought more than their predecessors. What do you think may be the consequences of this approach?

In China today, it is very clear that the leadership under Xi Jinping is seeking to wall off academia, the media, the professions, the internet, and much of society from many foreign influences and so-called “infiltration.” Leaked central directives have made clear that Chinese officials are expected to talk about the threat of “hostile foreign forces” allegedly undermining China’s unity and stability. New policies that the Xi regime has put into place, whether in education or media, are backing up this talk with action. The history that I describe suggests that the costs of these policies may be severe because openness to new ideas from around the world has greatly benefitted China’s quest for greater wealth and power, which has been remarkably successful over the past 40 years.

Today the Chinese economy’s growth is slowing, it’s shouldering massive debt burdens, and investor confidence has been falling around the world. Deng Xiaoping and the reformers of his era knew that China succeeds not by limiting its connections to the outside world but by opening itself up to new ideas wherever they may originate. At Davos and elsewhere, Xi Jinping talked about China as the champion of “openness” and “globalization,” and indeed China would benefit if he pursued a path of greater openness to foreign ideas and opened more of the Chinese economy to foreign investment and competition — but that’s not what’s actually been happening in recent years.

Finally — what could American policymakers learn from a hypothetical tour of Chinese economists?

It’s interesting to consider what Chinese economists might have to teach American policymakers. We are at a strange moment to answer that question — a moment when the General Secretary of the Chinese Communist Party went to Davos and gave a speech that was widely perceived to be lecturing President Trump on the benefits of openness and globalization, as I mentioned earlier. Certainly, both the United States and China would benefit from greater exchanges between economists and economic policymakers in both countries. This would facilitate mutual understanding of each other’s priorities and the main challenges that each side feels it faces. Our economies are deeply interdependent, and we should be exploring steps that enable us each to prosper, not pursuing zero-sum policies that are likely to end up hurting both our economies. But with the Trump administration, it seems unlikely that officials who have attacked what they understand to be China’s economic policies, such as trade czar Peter Navarro or Commerce Secretary nominee Wilbur Ross, would want to listen to Chinese economists. We can only hope that a spirit of partnership returns to U.S.-China economic exchanges in the near future.