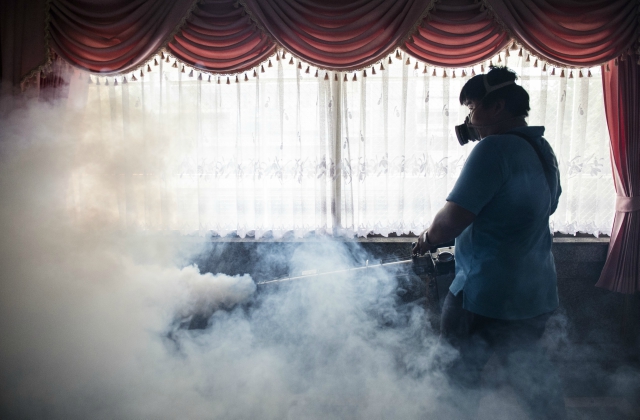 A city worker sprays chemicals with a fumigator to kill mosquitoes in an effort to control the spread of the Zika virus at a school in Bangkok on September 14, 2016. ( Lillian Suwanrumpha/AFP/Getty Images)

Two years ago, the mosquito-borne Zika was so obscure that it wasn't even tested by most clinicians. But in the past several months, the virus has generated international headlines as it spread rapidly in the United States and Brazil. In the latter country, the outbreak has been linked to an unprecedented rise in neurologic disorders such as microcephaly — a birth defect that causes unusually small heads in babies— and Guillain-Barré syndrome, a disorder that can result in paralysis or death. International public health organizations are now scrambling to learn more about the virus and have put out travel advisories for pregnant women who are at risk of passing it on to their unborn child.

The latest hotspot for the Zika outbreak is Asia — though, technically, its arrival there is not new. Identified first in Africa, Zika has been present in Southeast Asia for over 50 years, where it has managed to go relatively undetected for most of this time. But the recent increased awareness of the virus has exposed a growing problem. In Singapore, more than 400 documented cases of Zika have been detected since late August. Thailand, which typically documents five Zika cases a year, has recorded some 200 so far in 2016 as a result of increased testing.

Dr. Ashish Jha is Director of the Harvard Global Health Institute, K.T. Li Professor of International Health & Health Policy at the Harvard T.H. Chan School of Public Health, a professor at Harvard Medical School, and a practicing physician at the VA Boston Healthcare System. His critique of the World Health Organization’s response to the 2014 Ebola outbreak made headlines, and he spoke about the epidemic at Asia Society Hong Kong Center in May. Asia Blog spoke with Dr. Jha to assess the Zika threat in Asia.

The Zika virus has been in Southeast Asia for 50 years. Do you think the recent rise in cases is due to these countries experiencing their own epidemic? Or is it because increased surveillance of Zika is forcing countries to realize that the virus is more prevalent than previously thought?

I would think the latter. Considering how much Zika has been in the press, globally, people are much more attuned to it. I think that most clinicians around the world probably hadn’t even heard of or knew what to look for in terms of a Zika infection five years ago. My first guess is that this is about increased surveillance, increased testing, therefore finding more cases.

That’s hard (to know). These might be new cases, as opposed to what would’ve been there anyway, meaning Singapore might be having a bigger outbreak of Zika right now. But we just don’t know.

There’s also a lot of conflicting information on how Zika is affecting Southeast Asia. For instance, the Center for Disease Control, the European Center for Disease Control and Prevention, and the World Health Organization are all reporting different information on the number of countries experiencing a Zika outbreak in Asia. What accounts for this discrepancy — and which organization is right?

First of all, the discrepancy comes from the fact that we don’t have a single agency or a single body in the world that is the source of all information, the source of all expertise, or the source we always turn to for advice and guidance. I don’t know who’s right. The data out there it’s just not very good about what exactly is happening with Zika — outside of Singapore where we’re now starting to see these cases — what the risks are for pregnant women, what the risks are for travel in different places of SEA. I would say we just don’t know.

There are no reported links at the moment between Zika and neurological disorders in Southeast Asia. Have the links gone unrecognized, or are there factors that make them less likely to appear in this region?

It is a little bit of a surprise to a lot of people how much neurologic stuff you’re seeing in Brazil. But it is not evenly spread across all countries. As you said, we haven’t seen that much in Southeast Asia. So there are some fundamental questions such as, “Is this about a co-infection with Dengue?” Some people have suggested that once you have had Dengue, then getting Zika is what causes the neurologic issues. Others have said maybe there’s a slight genetic variation in the makeup of the Zika virus now, maybe it’s more virulent, that maybe it’s causing different issues. I think the answer is an honest “we’re not sure.” There are a lot of people working on the science. I believe we will have a better answer within the next six months because of the amount of activity that’s happening here.

What can countries do to effectively combat the spread of the virus?

It’s a combination of three things. One, you just need a good old-fashioned public health intervention. We’re talking about breeding mosquitos as being part of the problem, so you can drain swamps and get rid of sitting water. Number two: Push for faster diagnostic testing. And third, what would be ultimately helpful is a vaccine.

Should travelers to Southeast Asia be worried?

I don’t think we need to panic at all. I also don’t think that the vaccines should make anyone feel all that comfortable because I don’t think we’re about to get a vaccine anytime super soon. I think in the most optimistic scenario — and that may even be too optimistic to say — it’s at least a year away. But it’s probably longer.

Once Ebola came to the public consciousness, a vaccine was developed quickly. Is it taking longer to develop a Zika vaccine?

I do think there’s a difference, and I think that part of the difference is because there are a lot of people who have just not taken Zika seriously. That’s of course because most people who get Zika end up being fine from it, most adults. I think we have not taken on the issue of how serious this can be for pregnant women. And I have to say, I worry that part of the reason is because some people have decided that at the end of the day, the people who are most affected are going to be the poor because they’re more likely to be exposed to mosquitos. That’s not true, and even if it were true, it is not an acceptable reason not to act. Anything we can do to speed up the vaccines process, like actually funding it from Congress, would be really helpful. I think we have underestimated how big of a deal Zika is, especially for pregnant women, and I think we’re going to be paying the price for that for a very long time.

So this isn’t something that’s going to go away anytime soon?

I don’t think so. No one predicted exactly what would happen two years ago on this, or even a year ago, so you don’t want to be overly confident about what’s going to happen in the future. I don’t think we’re going to be done with talking about Zika anytime super soon. It’s going to be with us for a while. I hope I’m wrong.

Kelsey Roy is an intern at Asia Society Southern California.