How the Events of 1949 Shaped U.S.-China Relations Forever 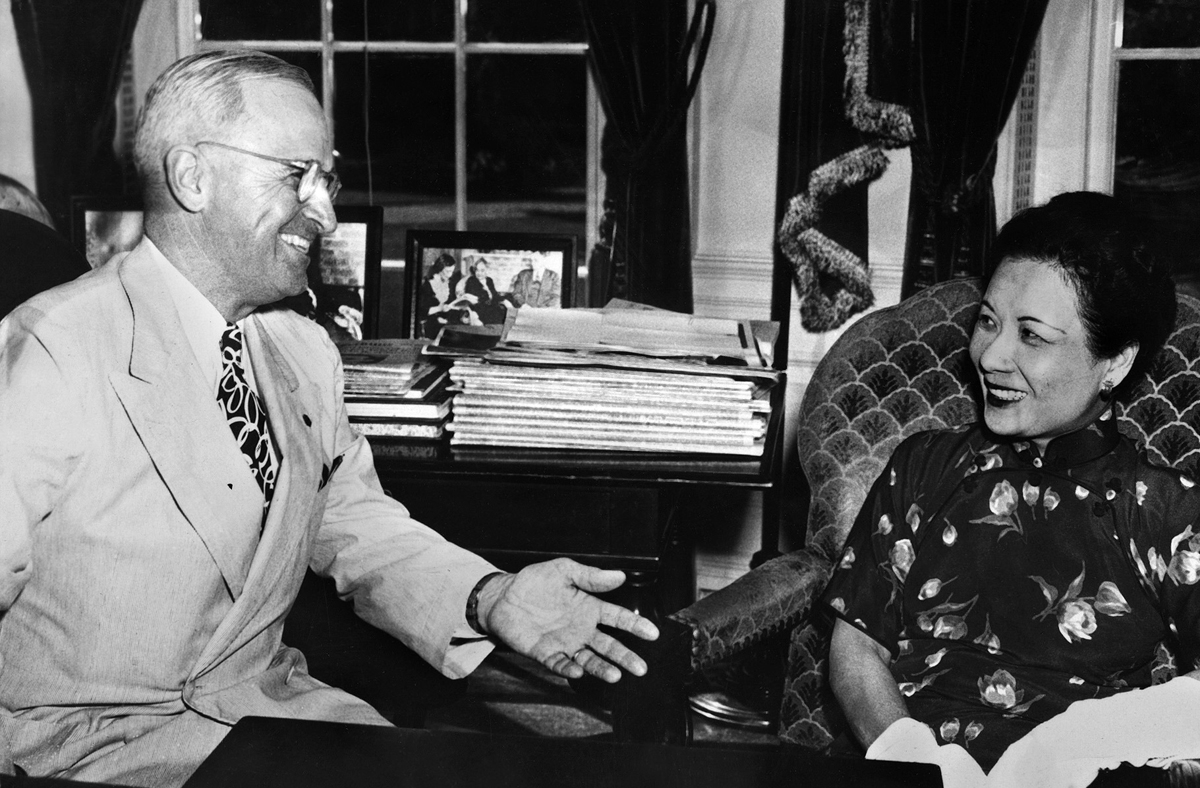 U.S. President Harry S Truman and Soong Mei-ling, the wife of Republic of China President Chiang Kai-Shek, were two of the most important figures in setting U.S. policy toward China after World War Two. (AFP/Getty Images)

In the early months of 1949, it became increasingly clear that Mao Zedong' Communists would win the Chinese civil war. This presented U.S. President Harry S Truman with an unappetizing set of choices. He could either acknowledge the Communist victory and forge a modus vivendi with Beijing, which was the approach favored by his ambitious Secretary of State, Dean Acheson. Or he could work with Nationalist leader Chiang Kai-Shek to overthrow the Communist regime, the preference of strident Minnesota congressman Walter Judd as well as Chiang and his influential wife, Soong Mei-ling.

The decision that Truman ultimately made would have grave implications for U.S. foreign policy in subsequent decades.

On Wednesday, Nov. 29, Kevin Peraino joins journalist Richard Bernstein at Asia Society to discuss Truman, Chiang, and the events of 1949. The program will be available worldwide via live webcast at 6:30 p.m. New York time. Learn more

The story of 1949 forms the basis of Kevin Peraino's A Force So Swift, a tense historical account of a year that proved so pivotal to subsequent Sino-American relations. Peraino, a veteran foreign correspondent, used archival research and extensive interviews to provide an in-depth look at crucial historical figures and the difficult choices they faced.

Asia Blog recently interviewed Peraino by email to gain a deeper understanding of the themes he tackled in his book. The interview has been edited lightly for clarity.

What sparked your interest in writing about the events of 1949? What elements of the story did you feel had not yet been told?

A few years back, in 2011, the CIA finally declassified its secret internal history of covert operations around the Chinese periphery in 1949. Although some of the broad strokes of these operations had leaked out over the years, the new documents provided a lot of new granular detail that made for fascinating reading.

Meanwhile, around the same time, the Obama Administration had begun talking about its pivot to Asia, which some in Beijing saw as a modern-day containment policy. It seemed like a great opportunity to tell a fresh story about what the original containment policy actually looked like.

A central character in your book is Minnesota Congressman Walter Judd, who fiercely lobbied the Truman administration to support the flailing Chiang Kai-Shek. What do you think was Judd’s primary motivation?

Judd had been a medical missionary in China in the 1930s, so he had witnessed firsthand some of the worst violence of the Sino-Japanese War. He had treated victims of the Japanese bombing campaigns and was viscerally appalled that Washington wasn't doing more to support the Chinese government, then led by Chiang. Judd was also fiercely anti-Communist and later made a strategic case for supporting Chiang in his civil war against Mao, arguing that the U.S. should "keep China in the ring" to distract Stalin on his eastern border.

You write about the often contentious relationship between the ailing Joseph Stalin and Chairman Mao, who visited the Soviet leader in Moscow. To what extent was driving a wedge between China and the Soviet Union a viable option for the U.S. in 1949?

As a policy choice, a wedge strategy was probably the best of bad options. Truman's secretary of state Dean Acheson, one of the architects of this approach, had no illusions that it would show results quickly — and, as you mention, Moscow and Beijing actually concluded a major pact in early 1950. But the alternatives were probably worse.

Some of Truman's aides — notably defense secretary Louis Johnson — would have preferred to try to roll back Mao's advances on the mainland, enlisting Chiang's remnant on Taiwan to launch bombing raids and other forms of harassment. Acheson felt this approach would only drive Mao and Stalin closer together and risked dragging the U.S. into a quagmire in East Asia.

How might history have evolved differently had the U.S. done as the U.K. had and recognizing the Communist government in 1950?

There were voices inside the State Department who wanted to do just that, but it would have been politically difficult — not least because Truman himself was not particularly eager to do so. Fears of Communism —legitimate and exaggerated — increased significantly over the course of 1949, as high-profile spy cases played out across the front pages of American newspapers and the Soviets exploded their first atomic bomb.

Also, American and British interests weren't identical in 1949. Britain's investments in China were far larger than those of the U.S. during this period, and London was concerned about retaining Hong Kong, which required conciliating Mao. Mao and his allies recognized these divergent interests and tried to drive their own wedge between the U.S. and Britain.

How did the events of 1949 affect subsequent U.S. foreign policy dilemmas in Vietnam and elsewhere?

Although Acheson and Truman believed that there was little they could do to prevent Mao from taking over China, they were determined to halt the spread of Communism elsewhere in Asia. They set out to establish what they called a "great crescent" of containment that stretched from Japan to India. Soon after Mao's victory, the U.S. began sending weapons and advisers to the French in Vietnam — the beginnings of U.S. involvement in the region. This same logic of containment conditioned Washington's response to Kim Il-Sung's invasion of South Korea in June 1950. So the events of 1949 have cast a long shadow.